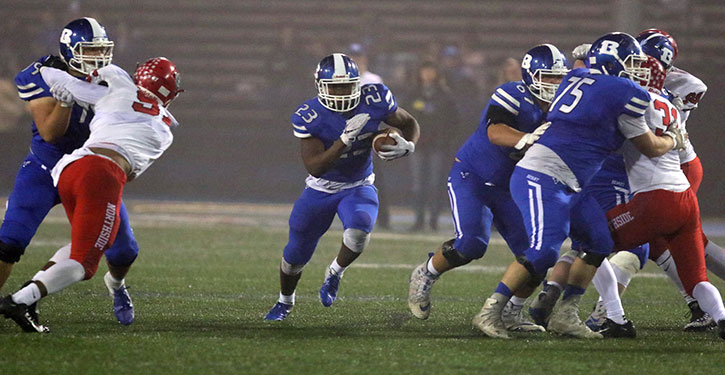 The Bryant Hornets of 2018 will long be remembered as the first in the history of the football program to make it to the State championship game at War Memorial Stadium.

They’ll always have that.

Of course, they want more. If you’re going to make it to the finals, why not win it all? And as a bonus accomplishment, they could stop a frustrating winless drought against the defending State champion North Little Rock that stretches back to 2010.

This will be the Charging Wildcats’ third consecutive trip to the finals. They suffered a lopsided loss to Fayetteville in 2016 but then edged Bentonville for the crown in 2017. They have not lost a game since that one to Fayetteville, that’s 25 wins in a row.

Those wins include a 25-14 decision over Bryant in 2017 and, just a month ago, a 34-28 victory over the Hornets after Bryant had built a 21-0 lead in the first quarter, a result that still sticks in the Hornets’ craw.

While North Little Rock has all that experience in the final, it’s a first for the Hornets.

But it’s hardly a first for Bryant head coach Buck James, who played in a final for Jefferson Prep in Pine Bluff in 1981. He’s coached teams to the title game three times, winning in 2012, and losing twice on last-minute plays.

So, what has he told his players about the experience?

The coach pointed to the Salt Bowl, the annual season-opening battle between Bryant and Benton, which is also a finalist in Class 6A, playing Greenwood at noon today.

(At the beginning of the season, we pondered if the Salt Bowl teams this year were as good as they’ve ever been?” and here they both are playing for championships in their respective divisions.)

James pointed to the Salt Bowl a couple of times as an example of what the Hornets are in for.

It has all sorts of publicity leading up to it, a huge crowd every year including a record-setting gathering of over 38,000 this August, plus tons of intensity.

If indeed it’s a good comparison, the Hornets should feel good about that. They’ve won 13 of those in a row.

Actually, Bryant and North Little Rock are very similar. They both feature tough defenses, particularly in their front seven, though they obviously combined to surrender 62 points in their previous meeting.

Both teams have been best at running the ball. Bryant’s Latavion Scott has rushed for 1,607 yards this season to become the all-time leading rusher in school history. He stands just 44 yards short of the single season mark set by Chris Rycraw in 2009. The all-time mark has been accomplished by Scott in 537 carries, Rycraw’s in 559.

Of course, the development of Bryant’s offensive line has been a big part of that with centers Josh Stevens and Austin Trimble, guards Clay McElyea, Tanner Wilson and Jacob Burton and tackles Blaise Smith and Logan Burton.

The emergence of junior Ahmad Adams as a second runner for the Hornets has helped too since Adams returned to the offense after playing middle linebacker while senior Jakob Neel rehabbed a knee.

North Little Rock not only has one 1,000-yard rusher but two. Brandon Thomas has 1,683 yards, Tyler Day 1,210 yards and wingback/wideout Oscar Adaway has accumulated 847 yards on the ground and 622 on 37 pass receptions.

He is the favorite target for the Charging Wildcats’ sophomore quarterback Kareame Cotton who has thrown only 124 passes this season for 1,205 yards and 16 touchdowns.

The Wildcats’ secret weapon is tight end Drew Martin. Though he’s caught just 14 passes, six of them have gone for touchdowns including a pair of disheartening burns on the Hornets in the first meeting.

The Hornets throw more. Senior Ren Hefley is 122 of 239 for 1,503 yards and 15 touchdowns with sophomore relief ace Austin Ledbetter 29 of 55 for 477 yards and four touchdowns including two in the quarterfinals against Fort Smith Northside.

Fourteen different receivers have caught at least two passes for Bryant led by junior Jake Meaders with 42 receptions. Sophomores River Gregory and Hayden Schrader are also among the leaders in receptions.

That youth has been a challenge at times this season as they’ve struggled to get open against experienced secondaries with speed. That, however, is a bit of a mystery still for the Charging Wildcats secondary since Fort Smith Southside’s Taye Greenwood completed 31 of 56 passes for 447 yards and six touchdowns in the second-round playoff meeting, which North Little Rock escaped with a 48-45 win.

If figures that, whichever team is most effective throwing the ball, in order to help open up the vaunted run games will have a distinct advantage.

Defensive end Nate Wallace leads the Bryant defense with 81 tackles including 15 for loss and 13 sacks. Linebacker hybrid Catrell Wallace has made 78 stops and linebacker Daylin Land has been in on 50. And, despite only playing in just five games this year, Neel is already fourth on the tackle charts with 49.

“It’s probably as good a feeling as I’ve had in coaching football,” James said of getting the Hornets to the title game. “I’m really proud of these young men and the work and effort they’ve put into it. I’m proud of our coaches. They have worked tirelessly to get these guys to this point. Overall, it’s been a great team effort.

“I’m excited the way we’ve played the last two or three weeks on offense and our defense keeps getting better, that good things can happen to our football team,” he stated.

“It’s going to be a battle of wills,” the coach declared.

Recalling his own playing experience, James noted there was no TV or streaming video, no record of it when Jefferson Prep beat Lewisville 14-7.

“It won’t be like when I played in it in 1981,” he quipped. “I told (the players) I ran for every yard and made every tackle and threw every pass and caught every pass.

“This is a situation where it’ll live forever,” he reminded, reflecting on the radio, TV and streaming that will be bringing it to fans live and available for playback. “This thing will be on statewide TV. It’ll be recorded. It’ll be here forever.

“I tell them before every game, it’s a 48-minute game and this will be something that you can enjoy with your teammates, your family for years to come. Do your best. Play as hard as you can. Enjoy the ride.”