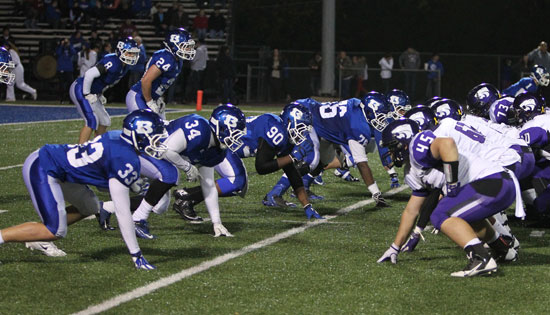 Conference rivals from 2002 to 2011, the Bryant Hornets and the North Little Rock Charging Wildcats will meet in the Class 7A State playoffs for the first time tonight at Bryant Stadium. 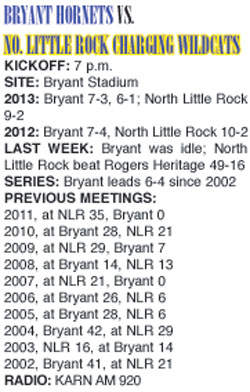 North Little Rock, which lost in the semifinals to eventual champion Fayetteville last year, is the prohibitive favorite. Before the season, many picked the Charging Wildcats to win it all.

They’ve lost just twice this season. In the second week, they suffered a 24-23 loss to Mississippi powerhouse South Panola. Two weeks later, they absorbed a 48-32 loss to Cabot, which remained unbeaten the rest of the season. The Charging Wildcats have won seven in a row since including a 49-16 romp over Rogers Heritage last week in the opening round of the playoffs.

Bryant, meanwhile, has won five straight including a 21-17 victory over El Dorado on Nov. 8 that clinched the South Conference championship and a first-round bye in the playoffs.

But winning the South has garnered little appreciation from the pundits, mainly because it’s a league full of Class 6A teams. North Little Rock figures to be the best team Bryant has faced since the opening-season loss to Conway so the Hornets certainly have plenty to prove.

Interestingly enough, in the previous meetings between the two teams, the home team has won on seven consecutive occasions. Not since Bryant won at North Little Rock in 2004 has the visitor prevailed.

And, as it turns out, the Hornets’ path to the State championship game would pass through two old Central Conference foes, North Little Rock this week and the winner of the Cabot-Little Rock Central game the following week.

This year’s North Little Rock team, like most of those Hornets’ teams have played in the past, can be explosive offensively. The only game in which the Charging Wildcats have scored fewer than 30 points this season was the loss to South Panola.

“They’ve got a big, physical offensive line,” reported Bryant defensive coordinator Steve Griffith. “They’ve got a physical running back (Deon Tidwell), a young man that started at fullback at the beginning of the year who is running at tailback. He runs downhill really, really well.

“The quarterback (Heath Land) is a good trigger man,” he continued. “He does a nice job, especially on the play-action passes, gets the ball out on time and gives the talented receiver crew a chance to catch the ball and do something with it. The outside receivers are very talented. They put a lot of pressure on you all across the board.”

Among those receivers is junior K.J. Hill, who played at Bryant last year. He’s weighing Division I college offers from Arkansas and Auburn.

“You have to be prepared to defend horizontally all the way across with the short passing game then the running game,” Griffith said. “Then they’ve got the speed on the outside to pressure you vertically.

“It’s going to be a challenge,” he acknowledged. “We’ll have a to do a great job on our reads, especially our linebackers and safeties so they can help the corners on the outside. We’ve got to be able to establish a physical nature up front and, hopefully, control or stop the running game so that we have a little better idea when the passing game’s coming. That way we can do some things to give our outside guys a little more help.”

The extra week off has allowed some healing on the Bryant defense, particularly senior Austin May, who leads the team with seven sacks. Jarron Wade, who moved over from offense early in the season to play on the defensive line, has had five sacks and he and May lead the team with five tackles for loss. Sophomore Cameron Murray’s condition was also helped by the time off. He and Mario Waits have stepped to the forefront on the d-line as well.

The Bryant offense would like to take some of the pressure off the defense but they’ll be facing a formidable North Little Rock defense.

“It’s a very athletic defense,” said Hornets offensive coordinator Lance Parker. “They’re a 5-2 and they like to play a lot of cover two. They like to keep it pretty simple and let their athletes make plays.

“What we’ve got to do is stay stuck on blocks,” he asserted. “We feel like we match up pretty well inside against them, we’ve just got to stay stuck on our blocks.”

The Hornets went into their regular-season finale against El Dorado having suffered just 10 turnovers in the previous nine games. They had three against the Wildcats, which prevented them from making a much more comfortable win.

“We put the ball on the ground a lot in the game against El Dorado,” Parker said. “We can’t do that and beat these guys. We don’t have that many free possessions to give. I think we’ve got to come out and hang onto the ball and run it effectively, play some ball control offense.”

Since shifting to a more run-oriented offense after a 9-3 loss to Pine Bluff in week five, the Hornets have rushed for 1,462 yards, an average of just over 292 per game in the five outings since. 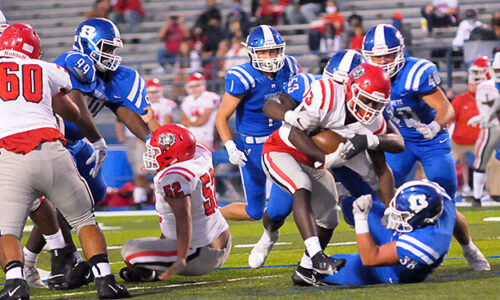