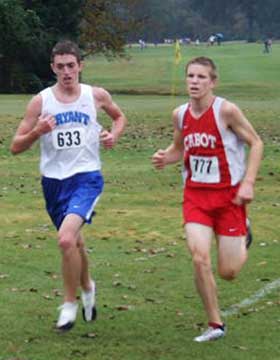 CABOT — For the second year in a row, the Bryant Hornets have placed fifth in the 7A-Central Conference meet which was held Monday, Oct. 26, at Rolling Hills Country Club. The Hornets scored 119 points to finish behind team champion Conway (43), Russellville (66), Cabot (71), and Little Rock Catholic (81). Finishing behind the Hornets were Van Buren (184), Little Rock Central (191), and North Little Rock (213).

"All season we have not been able to put it all together on the same day, and today was no different,” commented Hornets head coach Steve Oury. “We knew that in order to crack the top four, we had to have our five scorers run at or near their personal bests. Jesse Wolf came through with a personal best and ninth grader Rodrigo Rodarte cut 32 seconds off of his best time in only his second 5k.

“At the same time, we had several guys who just didn't have great races,” he continued. “We need to try to get that corrected for the State meet.

“Luke ran hard and did a good job earning all-conference, but he was also under the weather,” noted the coach. “We will keep working hard and hopefully have everybody that we need healthy for the state meet in Mountain Home on Nov. 7."