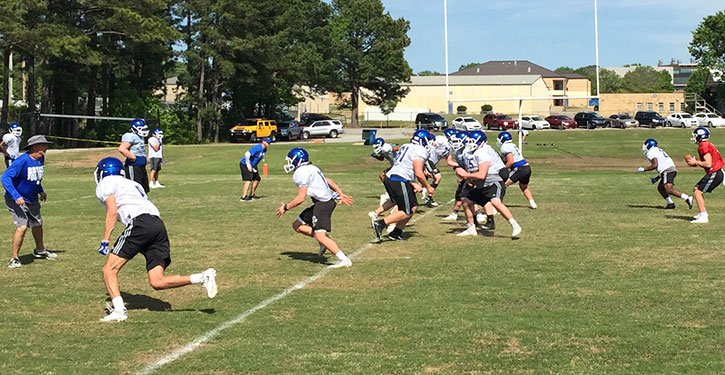 This is the third session of spring practice for the Bryant Hornets under head coach Buck James and his staff so the players, at least the junior and senior classes should all be aware of what’s expected of them and how practice will go.

“I think we’re stronger than we’ve ever been since I’ve been here,” said James before today’s first practice.

He noted that the team competed in a recent weight-lifting competition in Benton and won all but three weight categories and the overall competition.

“We’re in better shape than what we’ve ever been at this time,” he continued. “We have a lot of guys that are two- and three-year starters that are coming back.

“But, saying all that, we’re still very young in our secondary,” the coach pointed out. “We’re still very slim in our linebacker area, from the matter of depth, players who’ve played. Really, other than Jake Wright and Jakob Neel, I don’t know if we have anybody with a lot of playing experience coming back.

“We’ve got to shore up some of those receivers, our linebackers. We’ve got to find the right rotation with our offensive line, defensive line then we’ve got to have some d-backs develop and come around. That’s our main focus.

Turning to special teams, James said, “I think our kickers are in pretty good shape. We’ve got them all three back from last year but, we’ve got to find us a punter. That’ll be huge too. Hopefully, these guys in our kicking game can kick the ball in the end zone. I know each one of them has gotten stronger. We’ll see how that works out.”

Each team gets 10 days of contact over a three- or four-week period.

“We can wear our pads, we just can’t go to the ground,” James noted. “And the weather dictates so much of everything with us, and with soccer going on and them using the field and stuff, we’re in sort of a by-the-weatherman-type basis.

“We think we can get three days in this week,” he said. “We’re going to try to do a padded day today then a padded day on Wednesday. Tomorrow will be more of a thud day, just to see what we need to do, what we made mistakes on today. Hopefully, we can get in Monday, Tuesday and Wednesday this week.

“We’ve got the State track meet on Thursday, and Friday is Senior Day for all our other sports. So, we’re going to try to give them off that day,” he added, “Hopefully, we’ll get in two or three next week then finish up with two or three that next week. Hopefully, we can get this done in three weeks.

Asked about specific plans for each practice, James related, “We’re just going to go back to like we practice. I mean, we’re just going to install each part of our offense and defense each day. We’ve got two or three installs we’ve going to do. In 10 days of pads, hopefully, we’ll have everything in and have an idea of where we want to go with it in the summer.

“We have a lot of unanswered questions, I guess,” he allowed. “But we have a lot of guys that we already know can play. So, it’s a little bit different than what it was the first year I was here and a little bit different from last year because we were still installing our offense and stuff. This year, we’re in a different situation. We’ve got guys that we know can play and play at the high school level. We’re looking for them to perfect some of that.

“We’re looking to narrow the gap between our so-called ones and our so-called twos and threes and try to get that guy to where he can compete at a better level, to give us more depth or more competition at spots.”

James and his coaches may try offensive guys on defense and vice versa.

“We’re hoping that we can get some guys to help us on both sides of the ball, in some skill positions, maybe even in some third-down situations with a defensive lineman or offensive lineman on defense,” he related. “Looking to maybe sharing a guy here and there to help us better in a crunch-time situation in a ballgame.

“Definitely, the playbook ought to expand,” the coach asserted. “Not necessarily more plays but what we can do off of plays; the concepts that we’re already good at, to be able to take that another step further.

That’s the day the Hornets open the 2018 season in the annual Salt Bowl at War Memorial Stadium against the rival Benton Panthers.

“We want to be ready for our first ballgame then we definitely want to be ready by our first conference game,” the coach stated. “The way this thing is set up, our schedule, without a doubt, is the toughest Bryant football has ever played.”

The Hornets play non-conference games against Class 6A Benton then a pair of 7A-West powerhouses, Bentonville West and Fayetteville before starting 7A-Central competition with Fort Smith Northside.

“So, we’re looking to make some football players, some guys who carry their pads, do what they’re supposed to do,” he related. “Guys that we can trust. Guys that are dependable and guys that are willing to do what it takes for the team to be successful. That’s our main goal and focus through these 10 days of what we call spring football.”