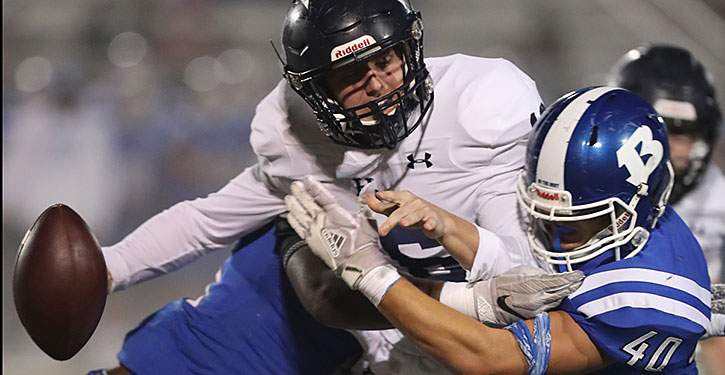 Here’s an encouraging thought for Bryant football fans as the Hornets prepare for a State semifinal rematch with the Conway Wampus Cats tonight:

Since losing twice to North Little Rock in their first year (2016) under head coach Buck James, the Hornets have won all seven playoff games in which they were faced with a team they had played during the regular season.

In 2019, when Bryant won its second Class 7A title, all three playoff games were rematches.

In the regular season, the Hornets defeated Bentonville West 38-0. In the postseason, it was 35-0.

And, in the regular season, the Hornets conquered North Little Rock 35-21. It was a 21-7 win in the championship game.

Back to the future:

“I think that’s what happened when North Little Rock beat us, they were just better,” he continued. “We weren’t anywhere where we needed to be; where they were.

“I think it comes down to matchups,” the coach related, “and can you exploit those matchups?”

In that previous match-up, Conway kept scoring so Bryant kept scoring until it was 56-33. They Hornets then took the air out of the ball, so to speak, going almost strictly to their running game to run clock. As it turned out, two possessions of that wound up going for touchdowns.

“We’ll do what we’ve got to do,” James said. “But they didn’t give any regard to how long they had the ball or anything. They were trying to score. Rightfully so. I mean, that’s what you do when you’re on offense. You try to score.

“They were tough, and they scored a lot of points,” he added. “And if we hadn’t have shortened it down, that game could’ve ended up somewhere around 90-80 or something. It’s a tough matchup. They’ve scored points on everybody they’ve played this year.”

The fact is, only Bentonville who allowed them 21 points in the second game of the season kept Conway below the 33 points that Bryant allowed. Since that loss, the Wampus Cats have won 66-21 over Springdale and 49-14 over Little Rock Central.

“Our defense really has to show up,” said James. “You know, at one time, we had a 35-7 lead (over Springdale Har-Ber last Friday) and we lost our edge and let them get momentum. It’s like fastbreak basketball. You’ve got to do things to disrupt their momentum, their flow. We’ve got to play well on defense. You know, defense wins championships this time of year and our defense has got to step up and play well.”

Asked if he expects the Wampus Cats to make any major changes, James said, “In coaching, you know, that’s what we always worry about. What’s somebody else going to do?

“Really, good coaches stick to what they can do,” he related. “I think that’s what they will do. I’m sure they’ll have some twists and there will be some things different than they did before. But, for the most part, we’re dealing with 16- to 18-year-old kids. We’ve got five days to prepare. There’s not a lot of wholesale stuff you can do.

“I think personnel might be the biggest option for them. They can play some guys that they play on offense on defense. And that can be a situation, if they do that. But this time of year, if it’s warm that’s a double-edged sword as well because that’s going to take mileage off of them.

Of course, when you win the first time, a coach doesn’t mess much with a winning formula for a rematch.

“We’re going to do what we do,” James allowed. “That’s what we’ve done all year long. We’ve put safeguards in all along to make sure we don’t become too one dimensional. We’re always scouting ourselves. With Hudl (the online video exchange/scouting service) the way it is, you can evaluate what you’re doing and who’s doing it. You can always get a feel for if your tendencies are too strong.

“The tendencies I like is being bigger, stronger and faster than the team you’re playing,” he emphasized. “That’s a tough tendency to overcome.

“But these guys have really come a long way,” he said of Conway. “They’ve closed the gap, for sure. Coach (Keith) Fimple’s done a great job. They’re very, very explosive offensively. They pose a lot of problems.”

In Bryant’s 48-22 win over Har-Ber in the quarterfinals last week, the Hornets scored on their first five possessions to grab a 35-7 lead, which James mentioned. After the game, he was a little disappointed in his team’s drop in focus and intensity.

“We’ve got to play well,” he concluded. “You’ve got to give the other team credit. They’re going to practice and play. Our kids have got to be realistic about what they’re capable of doing and they’ve got to go out there and try to do it the best they can for the whole entire game.”