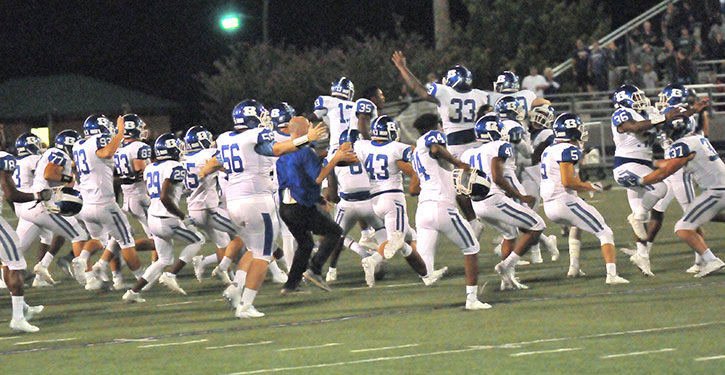 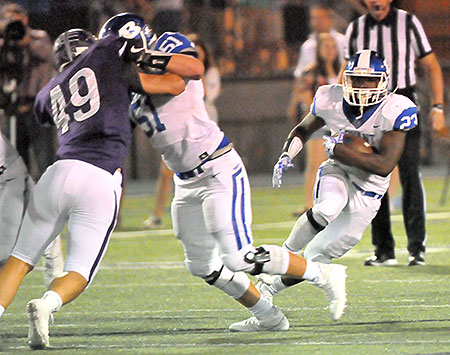 Running back LaTavion Scott (23) cuts behind a block by Zak Kemp (51). (Photo by Kevin Nagle)

Over the course of a football game — season, career, lifetime — good things and bad things will invariably occur. The Bryant Hornets hear this from their coaches all the time. Regardless of what happens, good or back, great or terrible:

When you’ve turned the ball over three times; when you’ve had a punt blocked; when you’re down by 14 late in the third quarter to the defending State champions:

When you’ve rallied to within a touchdown and your defense gives your offense a chance to tie the game and a fourth-down pass deep in the opponent’s end of the field falls incomplete: 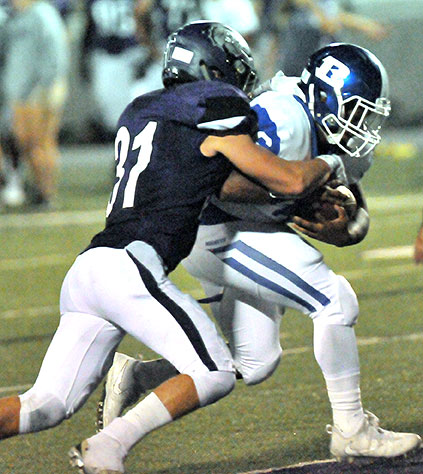 Kris King drives through a tackle by Fayetteville’s Will Litzinger for a touchdown in overtime. (Photo by Kevin Nagle)

When you wind up tying the game late and get it to overtime, you score first only to have the opposition answer to pull within a point of a second extra period:

All of that happened Friday night at Harmon Playfield as the Bryant Hornets relentlessly came from behind to force that overtime.

And, after Bryant scored on a 3-yard run by Kris King and Martin Ramirez kicked the extra point, it wound up coming down to the conversion following the Fayetteville Bulldogs’ OT TD on an 8-yard pass from quarterback Darius Bowers to wideout Cody Gray.

Fayetteville head coach Billy Dawson went for broke, win or lose, one play, right there and then. Eschewing the prospect of a second overtime after an extra point kick, Dawson sent his offense onto the field to try a two-point conversion.

Convert and win or fail and lose. 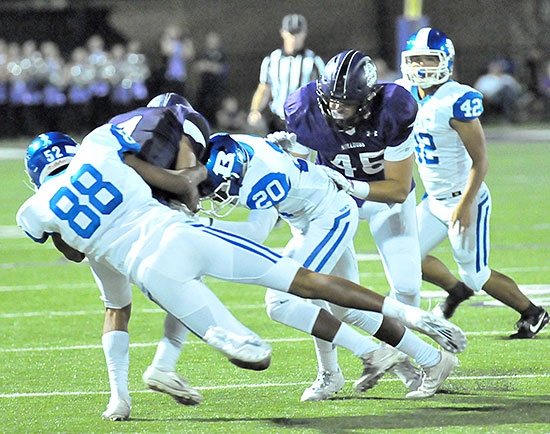 From the 3-yard line, the Bulldogs stacked most of the offense on the right side and, upon the snap, they all rolled that way. But, in the back of the end zone, running counter to the flow, Fayetteville’s Kris Mulinga, who had already caught 12 passes in the game, appeared to be open.

Bryant senior linebacker Jake Wright seemed to be the only defender to notice Mulinga going against the grain and took off after him. Mulinga had more than a step on Wright, who was close enough, however, to complicate the tough angle that Bowers was looking at as he stopped his roll to the right, turned back to the left and fired towards Mulinga.

It was a long, tough pass and it wound up being a little underthrown. Mulinga, however, got a hand on it and, as most fine receivers will tell you, if you can get your hands on it, you should catch it. 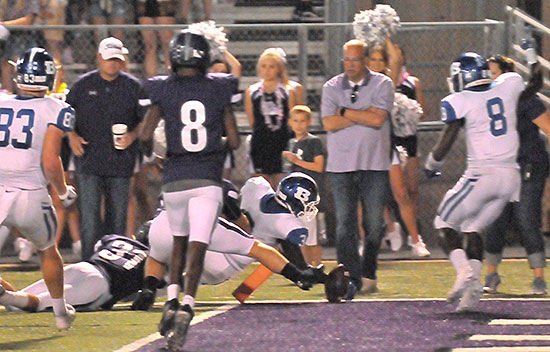 Wide receiver Randy Thomas reaches out to cross the goal line for a game-tying touchdown deep into the fourth quarter. (Photo by Kevin Nagle)

But the Fayetteville senior had to reach down and back for the ball and fell to the ground. As he turned over, the ball flew out of his hands and into the arms of Wright for an interception to end the game.

The Bryant Hornets thus celebrated their first win ever over the Fayetteville team (in five tries, all but one since 2006), 38-37, in a thriller.

It was the second nail-biter in as many games so far for the Hornets following a 49-42 win over Benton in the Salt Bowl.

The Hornets did indeed have three turnovers and a blocked punt. They led early 7-0 then not again until King’s touchdown in overtime. 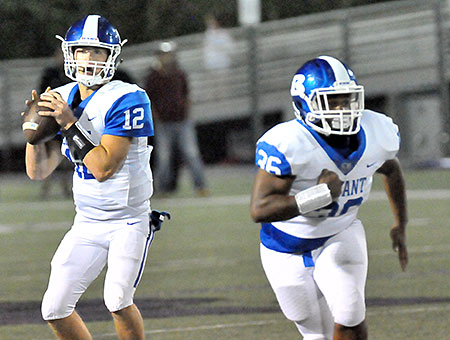 Quarterback Ren Hefley surveys the field as Kris King gets upfield ahead of him. (Photo by Kevin Nagle)

Bryant finished with 436 yards of offense nearly split evenly between ground and air. In just less than three quarters, running back LaTavion Scott racked up 152 yards rushing on 29 carries before suffering a shoulder injury.

Quarterback Ren Hefley, after a rugged start in which he completed just one of his first seven throws, wound up 17 of 32 for 221 yards with two interceptions and two touchdowns.

Defensively, the Hornets showed vast improvement over the Salt Bowl performance, holding the Bulldogs to a net of just 10 yards rushing while Bowers went 24-of-42 for 274 yards.

Bryant trailed 31-17 late in the third quarter. But Fayetteville’s touchdown on a 22-yard pass from Bowers to Gray, proved to be the Bulldogs’ last score in regulation. 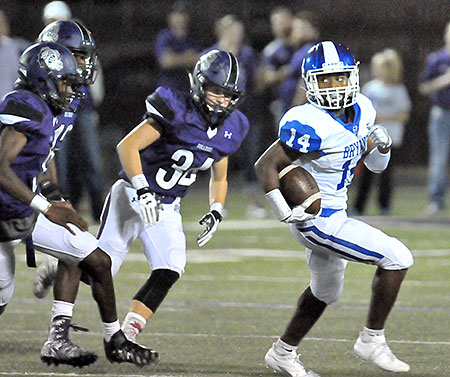 Brandon Murray cuts upfield on a big kickoff return that set up a second-half touchdown. (Photo by Kevin Nagle)

The Hornets kept playing. After a big kickoff return by Brandon Murry started Bryant’s possession at the Fayetteville 42. A 12-yard burst by Scott and, a play later, a 14-yard pass from Hefley to Ja’Kalon Pittman got the Hornets to the 12.

On Scott’s last run of the game, he barreled for 6 yards to the 6. Hefley completed a shovel pass to Randy Thomas to get it to the 1 and, eventually, Cameron Vail, borrowed from the defense along with four extra blockers, sliced into the end zone.

Ramirez converted the extra point and, with less than three seconds left in the third quarter, it was 31-24.

On the ensuing possession, the Bulldogs converted a third-and-8 from their own 40 with an 11-yard strike from Bowers to Mulinga. Three plays later, however, Fayetteville faced a fourth-and-5 at the Bryant 44. The Bulldogs went for it. Bowers tried to lace a pass down the left sideline but Antonio Rice had good coverage, knocking the ball down with just under nine minutes left to play.

The Hornets drove. The key play was an 8-yard run by sophomore Ahmad Adams to convert a third-down play. They reached the Fayetteville 31 when, on third-and-2 then fourth-and-2, Hefley couldn’t make connections with a teammate and, with 5:36 left in the game, it didn’t look great for Bryant.

But, on the very next play, Bowers was sacked by Austin Bailey and Antonio Todd. Mulinga caught a pair of short passes, setting up a fourth-and-3 at their own 38. With right at four minutes left, the Hornets had held, forcing a Fayetteville punt.

With 3:52 left, the Hornets began a clutch drive, starting with an 18-yard completion from Hefley to Luke Curtis. King muscled for 4 yards then caught a short pass and rushed up the sideline in front of the Fayetteville bench for 17 yards.

A play later, Hefley threw to Thomas on a short hitch. Thomas turned it into a 14-yard gain and the Bulldogs were flagged for grabbing the face mask. That gave Bryant a first-and-goal at the 10.

After an incomplete pass, Hefley again found Thomas on a short throw. But Thomas turned it upfield and scored on a tackle-breaking run. With 2:19 left, Ramirez tied it 31-31 with his extra point.

The teams exchanged punts and the game went to overtime.

Fayetteville won the coin toss and chose to play defense first. The ball was marked for play at the 10 and, in two plunges, King got into the end zone. The all-important extra point had the Hornets ahead 38-31.

Fayetteville would get its chance but was stuffed on the first two snaps before Bowers found Gray for a touchdown to set up the final foiled two-point conversion. When the ball came out in Wright’s hands, the Hornets celebrated their prestigious victory.

The Hornets opened the game with a 65-yard march in 11 plays. The drive featured Scott running behind the offensive line of Preston Kyzer at center, Joseph Wyllia and Clay McElyea at guard and Blaise Smith and Zak Kemp at the tackles. Logan Burton provided relief for them.

Scott put the first points on the board with a determined 4-yard run.

The Hornets’ defense forced Fayetteville to punt on its first two possessions. After the second kick, however, Scott sliced for 11 yards. The next snap looked like it might break big with a throw deep up the seam but safety Will Litzinger stepped in, intercepted the ball and returned it for a touchdown.

The Bulldogs’ next score came moments after Redarian Cobbs had blocked Vail’s punt. Fayetteville gained possession at the Bryant 29. Bowers fired to Mulinga at the 1 and, on the first play of the second quarter, Jackson White wriggled into the end zone to produce the Bulldogs’ first lead, 14-7.

After both teams went three-and-out, the Hornets drove to the Fayetteville 12. The key play was an 18-yard run by Hefley that ended with a face mask penalty tacked on.

They reached the 12 initially and, Hefley kept for 6 yards only to have the run negated by a holding penalty. The drive stalled but Ramirez came on to drill his first varsity field goal to cut the margin to 14-10.

In turn, Fayetteville drove to the Bryant 15 where the Hornets’ defense shut them down. A 37-yard field goal by Huxley Richardson made it 17-10, a lead that held until halftime.

The Bulldogs’ struggles to run a consistent offense continued in the second half as they went three-and-out. Bryant’s first possession of the third quarter started with a 6-yard run by Scott. But Fayetteville forced a fumble and linebacker Carsten Johnson recovered at the Bryant 43.

Aided by a roughing the passer penalty, the Bulldogs drove to the 24 where they faced a fourth-and-7. They went for it and Gray hauled in a 23-yard pass only to fumble at the 1. The Hornets just couldn’t get to it in time as Mulinga recovered. A play later, White scored and Fayetteville looked like it was on the verge of taking control of the game as Bryant miscues accumulated.

The Hornets’ answering drive included a 35-yard completion from Hefley to Murray that breathed new life in the offense. The drive reached the 16 where Hefley, trying to escape the rush, tried to find a receiver in the end zone only to have Frank Martin pick it off for the Bulldogs.

On a third-and-14 at their own 34, Bowers tried to throw only to be sacked by Conner Davis and Jakob Neel. The Bulldogs punted and, on the second play of the Hornets’ new possession, Hefley found Thomas in stride on a skinny post against the Fayetteville zone. Thomas split the two safeties and turned it into a 58-yard touchdown that, with Ramirez’ extra point, had them back within 7.

Fayetteville answered quickly. Bowers threw to Gray for a 22-yard touchdown to make it 31-17, setting up the drama that was to follow.

The Hornets will now play their first home game of the season, this Friday against Lake Hamilton. 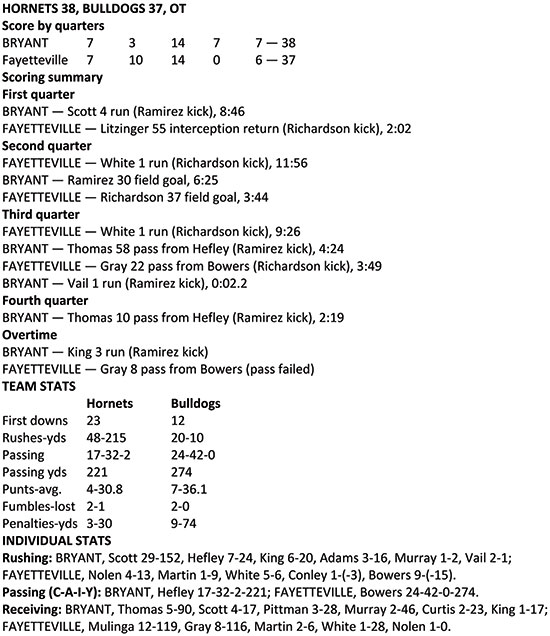