RUSSELLVILLE — Injuries continued to plague the Bryant Hornets track team as they competed in the Cyclone Relays on Friday, April 3.Senior Chris Brooks was unavailable and though Homer Coleman made his return, Daniel Hall continued to his rehab. Top scorer Tanner Tolbert was hampered as well.

Tolbert still turned in Bryant’s top performance, finishing second in the long jump, clearing 21’ 8” as the Hornets scored 9.5 points to finish 11th in the 23-team field.

The 4×100 meter relay team of Stanley Oxner, Tolbert, James Glasper and Kendrick Farr placed eighth with a time of 44.59. Also, Drew Persinger cleared 12’ 6” in the pole vault to tie for eighth.

"We had a tough time of it,” commented Hornets coach Steve Oury. “We had some decent performances that just missed scoring, but we also had a few events I was hoping to pick up some points in, that we didn't get it done.

“Tanner has been having some heel pain, so we didn't let him triple jump,” Oury added, “but he did a nice job in the long jump. We're hoping to get Chris Brooks back from an injury for the Conway meet. We need to get healthy and get some good workouts in. Hopefully we will have some guys break though and get in the money in the meets to come."

The Hornets were set to run at the Wampus Cat Relays in Conway on Thursday, April 9. 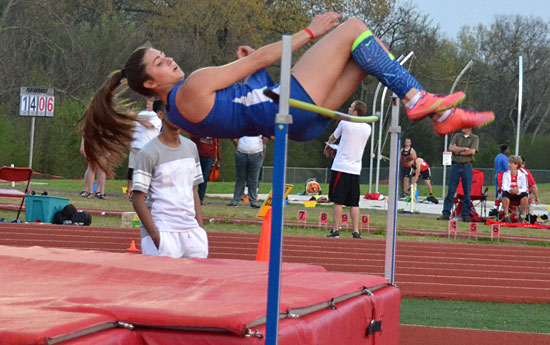