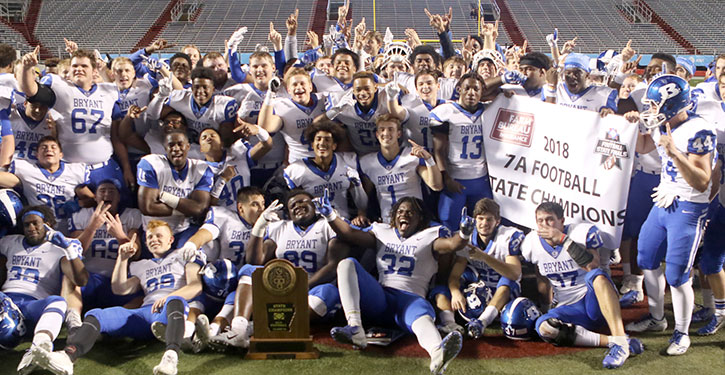 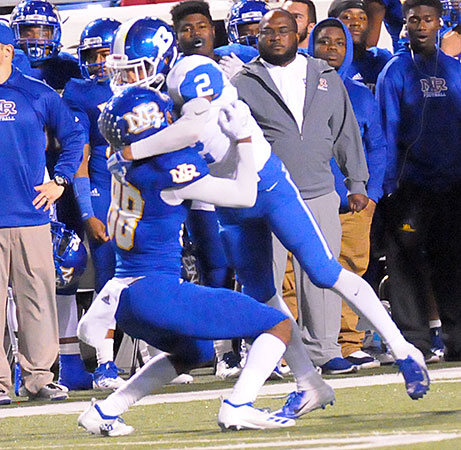 Andrew Hayes (2) breaks up a pass with a big hit. (Photo by Kevin Nagle)

LITTLE ROCK — Near the end of the press conference held at War Memorial Stadium in advance to the Class 7A, 6A and 5A State football playoffs, Bryant seniors Latavion Scott and Nate Wallace stood in front of the dais, getting a good look at the State championship trophy that had been placed there to help set the scene.

Someone asked, “Wouldn’t it be sweet for you guys to be lifting that trophy late Saturday night?”

They smiled and nodded, never taking their eyes off of it.

Well, on Saturday night, led by a group of seniors that, due to crazy, unforgettable (uncalled for?) circumstances, were denied the opportunity to lift up the coveted Salt Bowl trophy on the turf at War Memorial, did indeed lift up an even better one after the Hornets over-powered the powerful defending State champion North Little Rock Charging Wildcats, 27-7, earning the first State football title for the program which began in 1949. 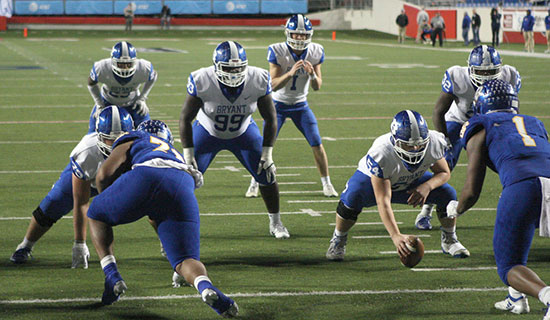 Defenders Kajuan Robinson (99) and Nate Wallace (32) line up behind Josh Stevens (54) to lead the way for Ren Hefley (1) and Latavion Scott (23), one of Bryant’s “jumbo” power alignments on the goal line. (Photo by Rick Nation)

And Scott and Wallace wound up with a little extra as it turned out. Scott, who rushed for 153 yards and three touchdowns, adding the school-record for single-season rushing yards (1,760) to his career record (3,331), was named the game’s MVP, while Wallace, who shared the Burlsworth Award, made eight tackles including two sacks and two tackles for losses and capped the victory with a 78-yard scoop and score with 1:06 left in the game.

The senior class is now the winningest in school history (30 in three years), tying the program record for wins in a season with 11. 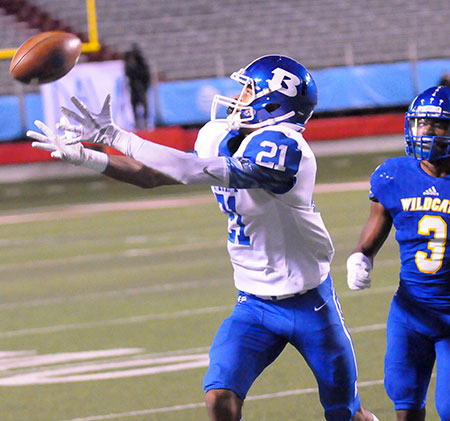 Josh Robinson (21) reaches for a deep pass after getting behind North Little Rock’s Sedrick Cain (3). (Photo by Kevin Nagle)

Bryant’s defense was so dominant, the Charging Wildcats managed just one first down and 21 yards of offense in the first half. The last time a North Little Rock team had been held to 7 points or less was Sept. 25, 2015, when Cabot beat them 34-3.

Take away runs of 41 and 53 by the Cats’ tailback Brandon Thomas and they netted just 93 yards of total offense in the game. Bryant dropped North Little Rock for losses on 13 plays including six times by d-tackle Kajuan Robinson, who slung down quarterback Kareame Cotton to force the fumble that led to Wallace’s touchdown.

Wildcats’ fullback Tyler Day, who came in with over 1,000 yards rushing on the season, managed just 8 yards of four tries. Senior Oscar Adaway, who entered the game picking up over 800 yards rushing and 800 more receiving, netted just 27 yards total, 21 on seven rushes and 6 on two receptions. 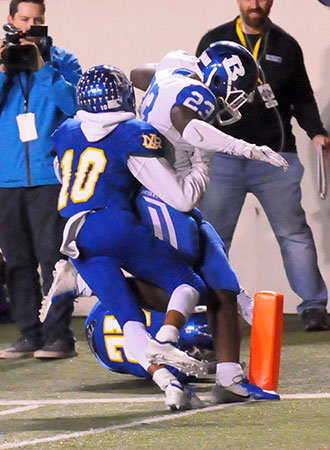 Latavion Scott steps just inside the pylon, finishing off his 33-yard touchdown run in the second quarter of Saturday’s State championship game. (Photo by Kevin Nagle)

Both teams came in determined to make the other’s quarterback beat them in the air. Cotton wound up 6 of 18 for 41 yards including the 12-yard strike to tight end Drew Martin for the Cats’ lone touchdown with 3:56 left in the third quarter.

By then Bryant had built a 20-0 lead. Senior Ren Hefley and sophomore Austin Ledbetter combined to complete just 9 of 28 passes for 101 yards. That was just enough to keep the Wildcats’ honest.

All three of Scott’s touchdown runs were set up by clutch pass receptions. On Bryant’s first scoring drive of 11 plays, 88 yards, twice Hefley converted third-down situations through the air. His 13-yard pass to Hayden Schrader converted one then his 10-yard completion to Jake Meaders converted another. On the next snap, Scott broke a 33-yard touchdown run.

Taking advantage of a fumbled punt return by North Little Rock in which Adaway tried to scoop up a rolling punt only to have Schrader recover the loose ball, the Hornets needed a 22-yard completion from Ledbetter to Meaders and a 15-yard strike from Ledbetter to Josh Robinson, the latter converting a third-down situation, to set up Scott’s 1-yard plunge with just seven seconds left in the half. 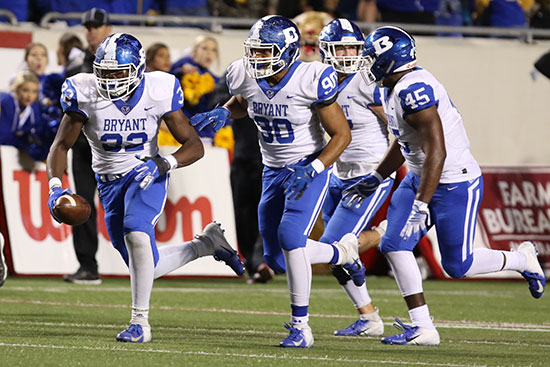 With an escort of Kyle Green (90), Austin Bailey (45) and Jakob Neel, Nate Wallace heads to the end zone after scooping up a North Little Rock fumble to clinch Bryant’s first State title. (Photo by Rick Nation)

In the third quarter, Hornets’ senior Grant Botti made the play of his season. On a third-and-24 from the North Little Rock 36, Botti reached out and made a spectacular one-handed catch on a strike from Ledbetter that not only picked up the first down but got the ball to the 2. A play later, Scott scored again, and it was 20-0 with Brock Funk’s extra point.

Thomas’ 52-yard gallop came on the very next snap. He was run down at the 13 by Tamaurian Wilson. The Hornets’ defense muscled up and North Little Rock wound up facing a fourth-and-9 at the 12. 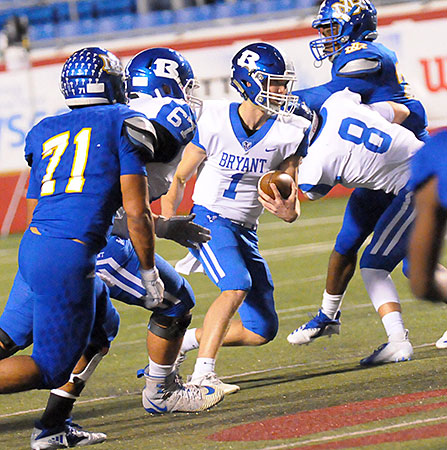 Cotton, who was just 2 for 9 in the air to that point with both of his completions for losses, fired a strike to Martin for the touchdown with 3:56 left in the third quarter.

North Little Rock made one last-ditch effort to score with a drive from the Bryant 49 to the 10. With just 1:20 left, Cotton tried to find an open receiver, scrambled then had Robinson pound him. The ball came loose, and Wallace was off the races, putting the finishing touches on the compelling victory.

“If you’d told me we were going to hold them to 7 points, I would’ve relaxed a lot more this week,” said Hornets third-year head coach Buck James, who led Camden Fairview to a State title in 2012 and played on a championship team in 1981.

“They’ve got a heck of a football team,” the coach asserted, recalling his team’s 34-28 loss at North Little Rock during the regular season. “They beat us up last time. They hit us in the mouth, we bled, we spit blood out and we didn’t like it. We told them, ‘You know, let’s play John Wayne football. That’s it in a nutshell. I told them, if we play John Wayne football, we get hit the mouth and, if we didn’t spit it out and go back after them, that was on us. 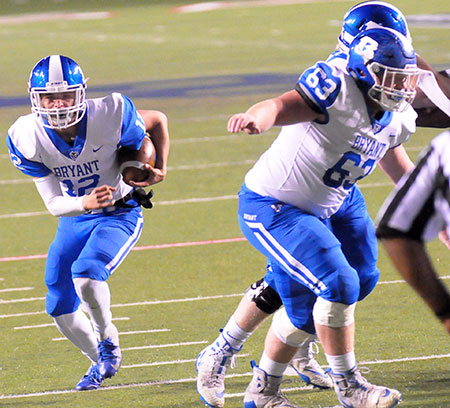 Austin Ledbetter (12) takes off behind the blocking of Austin Trimble (63). (Photo by Kevin Nagle)

“Here’s what we told our kids: No bad body language, don’t feel sorry for yourself and when something goes your way, don’t get too hyped up, don’t get too crazy, just go out there and keep playing football, keep going out there and chopping wood. And that’s what our kids did.”

Indeed, the Hornets didn’t get too low even when, right off the bat, a fumble on the opening kickoff gave North Little Rock the ball at the Bryant 45. The Hornets forced a three-and-out.

That was one of three consecutive three-and-out possessions to open the game for the Wildcats. They’re only first down of the first half came with less than two minutes remaining in the opening quarter. Adaway’s 15-yard run was followed by a pass play that was stopped for a loss then a sack by Wallace. 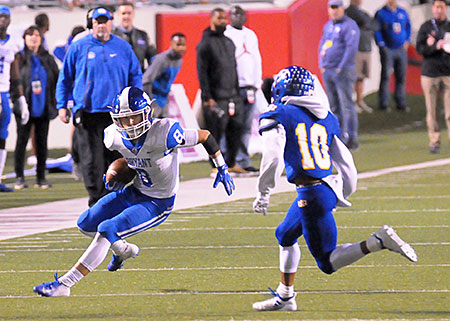 Josh Beck punted the Hornets back to their 12 and, despite a holding penalty that negated much of Scott’s 18-yard run, they marched for the opening score. Scott, who needed just 44 yards to set the single-season rushing mark, smashed the record with his determined 33-yard burst to the touchdown.

North Little Rock had just two more possessions in the first half. Both were three-downs and punt. The second kick in that sequence backed the Hornets up to their 18. And the Hornets went backward from there until they faced a fourth-and-27 from their own 1.

From the back of the end zone, Ledbetter hit a short kick with a lot of English on it. When it hit, it appeared the Hornets had it surrounded. But Adaway, trying to keep it from rolling further up the field, tried to scoop it up only to lose it. 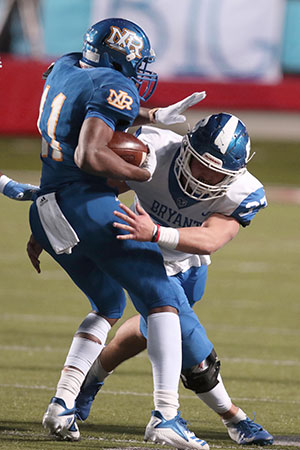 Jakob Neel makes one of his team-high 10 tackles. (Photo by Rick Nation)

The Hornets took advantage and led 13-0 at the half.

On the second play of the third quarter, Thomas more than doubled North Little Rock’s offense to that point with a 41-yard gallop to the Bryant 36. But, on the next play, Andrew Hayes dropped Thomas for a loss.

The next three plays were incomplete passes. Wilson burped the wide receiver on the first one, Jakob Neel tipped the second one and, on a fourth-and-12, Cotton hit Beck in the numbers on a slant and it bounced off him incomplete.

The teams traded punts and the Hornets wound up with the ball at their own 34 with 8:23 left in the third quarter. Botti’s reception saved the drive and Scott’s second 1-yard TD run along with Funk’s PAT made it 20-0.

North Little Rock made a bid to score after Bryant turned it over on downs at the Wildcats’ 23. They drove to the Bryant 33 where, on a first down, Robinson sacked Cotton back at the 47. A pair of incompletions followed, and Beck punted the Hornets back to their own 3.

The Hornets dug out from there and, though they only made it to the 15, they ate up all but the final 2:22 of the game clock. 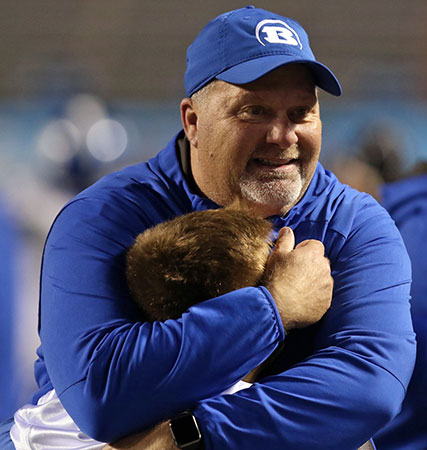 Still, North Little Rock drove to the Bryant 10, setting up the final nail in the coffin, Wallace’s scoop and score.

“This is for the alumni,” James stated. “For all the guys that played Bryant football, this has got to be a little bit of resolve for them.

“I’m really proud of the program,” he added. “The people have embraced us with open arms, about what we’re trying to do without much complaining. Our parents and our administration have been outstanding. They let us coach these guys.

“If you don’t get them to the point where you can stop a team like North Little Rock, trying to run over you, if you don’t have some tough situations in practice, discipline in your weight room and in your summer workouts — these guys more than earned their way here,” he concluded. “They deserved to be here. They deserved to play a great team like that. I’m proud of their effort, proud of their mentality.”

From now until the finals of 2019 come around, this team will be repeatedly referred to as: