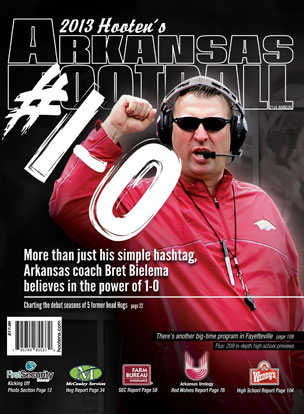 The Arkansas Razorbacks are picked sixth in the SEC Western Division and ranked 49th nationally.

The book retails for $17.99 and is on sale now at Big Red Stores, Kroger, Walgreens, Hastings, Edward's Food Giant and Wal-Mart.

The 440-page book, which takes more than five months to compile, offers the most comprehensive preseason football coverage in Arkansas.

In addition to providing extensive coverage of every high school team in the state, the book offers an in-depth preview on the Razorbacks and coverage on each Southeastern Conference school. Arkansas State and every state college are previewed as well as all 126 Division I college teams in America.

The graphically enhanced book features coaches' polls for each high school conference, statewide rankings for every team, super teams for each classification, a national college poll and complete college and high school schedules.

Hooten's high school favorites to win it all in 2013 are North Little Rock in Class 7A, Pine Bluff in Class 6A, Camden Fairview in Class 5A, Warren in Class 4A, Harding Academy in Class 3A and Junction City in Class 2A.

The book is published annually by Hooten Publishing, Inc., of Benton.