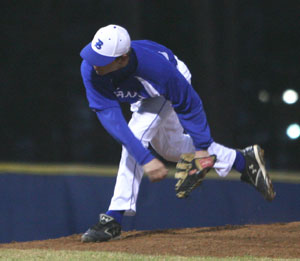 VAN BUREN — Bryant head coach Kirk Bock will tell you in no uncertain terms that his team isn’t hitting the way it will, that pitching and defense are getting his team by.

And they’re getting by just fine.

On Saturday, March 14, the Hornets used small ball to overcome the long ball of the Van Buren Pointers to improve to 4-0 in the 7A-Central Conference with a 5-3 victory. It was their third league victory on the road. They’re 5-1 overall.

Bryant used a pair of safety squeeze plays — one on a two-strike count — to key a pair of two-run innings that the pitching trio of Tyler Sawyer, Caleb Milam and Kaleb Jobe made hold up by shutting out the Pointers (1-3, 1-2) on three hits over the final four frames.

Sawyer, the starter, improved to 3-0 while Jobe picked up his third save.[more]

The game was tied 3-3 after three innings. In the top of the fourth, Justin Blankenship drew a walk and stole second. Hunter Mayall beat out an infield hit and stole second with Garrett Bock at the plate. Bock had fouled off a bunt attempt early in the count and the count went to 1-2 as Van Buren’s hard-throwing right-hander Brandon Moore got ahead. But Bock, risking the strikeout on a foul bunt, squared around again and bunted the ball up the first-base line driving Blankenship home with the tie-breaking tally.

Mayall, who took third on the play, scored moments later on a passed ball.

Sawyer drew a walk and Moore gave way to lefty David Myers who picked off courtesy runner Caleb Garrett who broke too soon trying to steal. Jobe lashed a single to left but Tyler Spoon robbed Brady Butler of a hit for the final out of the inning.

Sawyer pitched around a two-out single by Logan Meadors in the bottom of the fourth and around a one-out hit by David Ostrander in the fifth. Milam needed just eight pitches to work a 1-2-3 sixth then Jobe, after surrendering a lead-off single to Meadors, retired the next three to close out the win. He fanned the last two.

Bryant had taken a 1-0 lead in the first. Mayall singled to left, Bock sacrificed him to second and a wild pitch got him to third. He held there when Sawyer reached on an error but scored moments later on a passed ball.

Van Buren struck back in the bottom of the inning, however. Sawyer issued the first of his two walks in the game to Ostrander with one out. He then battled with Spoon who fouled off three 3-2 deliveries before golfing a fastball over the fence in dead center to give his team a 2-1 lead.

Bryant threatened in the second when Blankenship singled up the middle with two down, stole second and, after Mayall walked, advanced to third on a passed ball. But Moore got Bock to bounce to the right side. The ball took a wicked hop on Myers but he came up with it off his chest and flipped to Moore covering just in time for the third out.

Sawyer then overcame an error and a walk by striking out Matt Archuletta and getting lead-off man Preston Warren to sky to center.

In the third, Sawyer led off with a walk and Jobe blasted a shot off the base of the fence in left-center allowing Garrett, running for the pitcher, to sprint all the way home to tie the game. Jacob Clark, running for Jobe, took third on a wild pitch and scored when Butler bunted a hit pitch and got it down to Myers at first.

In the home half of the inning, Sawyer retired the first two then battled Moore who fouled off a trio of 3-2 deliveries before swatting a high and tight pitch over the fence in left to knot it back up.

After taking the lead in the top of the fourth, the Hornets made a bid to add to the margin in the fifth when Brennan Bullock stroked a one-out single up the middle, took second on a hit-and-run tap to the mound by Jordan Taylor and third on a wild pitch. But Moore and Myers made a nice 3-1 putout on Blankenship to get out of the inning with Bullock stranded.

In the top of the sixth, Sawyer slapped a two-out single to left and Garrett stole second but was stranded.

The Hornets will return to play on Tuesday, March 17, at home against Conway.