Hornets’ splendid first half carries them past North Little Rock 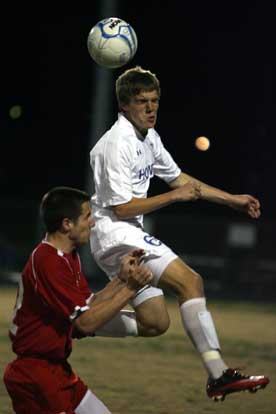 NORTH LITTLE ROCK — The Bryant Hornets bounced back from a tough 1-0 loss in overtime to Cabot on Tuesday with a 2-0 victory over the North Little Rock Charging Wildcats on Thursday.

Head coach Jason Hay said, “The first 25 minutes, we played as good as I’ve seen. We were really pushing North Little Rock’s back line backwards. We had them on their heels.”

Kyle Nossaman put the Hornets ahead from the left wing early in the game off an assist by Sean Sobba. Hay noted that it was the Hornets first goal in a first half since their Feb. 25 match against Texarkana.

Later, Jonathan Lowery headed one in off a corner kick by Ben Stukenborg to make it 2-0 going into the half.

“After we scored the second goal, I thought we got a little too comfortable with our lead and let our intensity down some,” Hay mentioned. “But overall, I was pleased with our overall effort. Our back four and keeper did their usual good job of keeping them from having much of a chance of scoring.”[more]

The win improved the Hornets to 7-5 overall and 4-3 in the 7A-Central Conference.

“Now we are at the halfway mark of the season,” Hay noted. “We need to keep our focus as we go back through the conference again, starting with Central and Catholic next week. We will not sneak up on anyone this time around. We’ll need to step it up especially offensively to make a run the second half of the season.”

The Bryant JV also got a win on Thursday. The 3-0 victory improved their record to 3-1 this season.

Ryan Watson opened the scoring in the 28th minute. Caleb Lambert got the second goal with an assist from Alec Salminen. Fransisco Zamora capped off the win with a goal, assisted by Chase Stuart.