Host team knocks Senior Sox out of Challenge in semifinal

GONZALEZ, La. — A game away from playing for the championship of the Louisiana Challenge, the Bryant Black Sox Senior American Legion team ran into the host Gauthier-Amedee Wombats of Gonzalez on Sunday and absorbed a 5-4 loss that ended their stay in Gonzalez.

Logan Grant struck out 11 and walked just on the mound for the Sox but the Wombats scored one run in the first and struck for four in the third. Bryant rallied in the fifth for four runs but could never gain the lead. That lone walk and both of the Black Sox’ errors came in that tell-tale third for Gauthier-Amedee.

The setback knocked the Sox’ record to 15-7 going into a trip to Fort Smith on Tuesday.

A one-out single and, with two down, a hit batsman and a second hit gave the Wombats a 1-0 lead in the bottom of the first.

In the top of the second, Jake Wright beat out an infield hit and stole second. With two down, Coby Greiner slapped a single to right. On the throw to the plate, Wright held at third, but Greiner hustled into second.

And when Brayden Lester drew a walk, the Sox had the bases loaded. A fly to right was caught, however, forcing them to strand all three.

Grant struck out the side in the home second, but the Sox had no luck in the top of the third. Another strikeout started the Wombats’ fourth, but a bunt drew a wild throw to first and it opened the door.

A single scored a run to make it 2-0. After a walk, a passed ball put runners at second and third. From there both scored on a single to right.

A stolen base put another runner in scoring position, but Grant got a strikeout then induced a grounder on the infield that was booted allowing the fifth run to score.

Sox catcher Cade Drennan threw out a runner trying to steal third to end the uprising.

Bryant’s rally in the bottom of the inning began with Austin Morgan getting hit by a 2-1 pitch with one out. Logan Chambers bounced a single up the middle then Logan Catton walked to fill the sacks again.

Thigs time, Drennan got a run home with a groundout and Wright came through with a two-run double to left. He scored on Grant’s single to make it 5-4.

After a pitching change, Stark grounded into a force at second to end the frame.

Grant closed out the game by setting down seven in a row. The Sox tried to mound one more rally in the top of the seventh when Chambers singled up the middle. He swiped second but the Wombats retired the next three to close out the win. 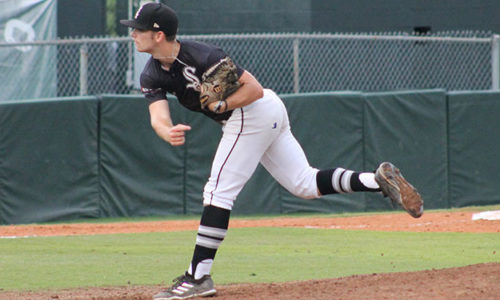