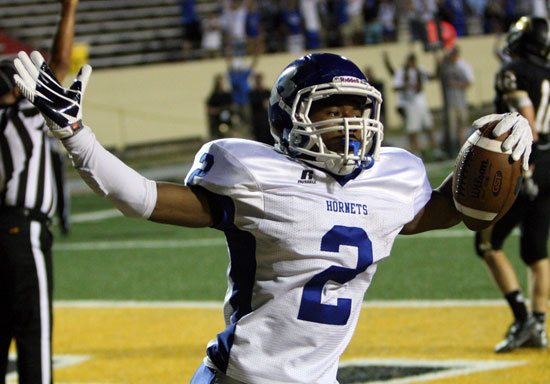 Howard, Hornets produce in cobbled together offense for win at Central

LITTLE ROCK — So, when Devonte Howard moved in from Little Rock Central before his sophomore season, he was a quarterback. He played in JV games but, on the varsity level, he was behind more experienced quarterbacks who had grown up in the Bryant system. In order to get his athleticism on the field, Bryant coaches moved him to wide receiver as a junior and he produced with 26 receptions for 331 yards and three touchdowns. He’d done so well, in fact, that he stayed at wideout as his senior season began and junior Brandan Warner, a prolific passer, took over as signal-caller. 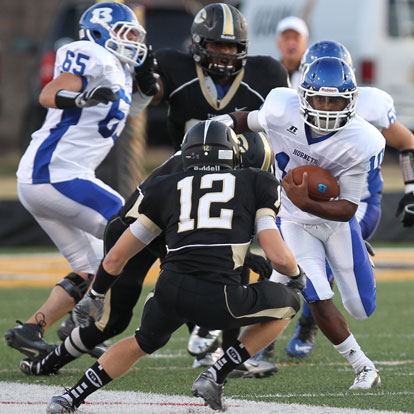 Warner had his bell rung a bit scoring a touchdown in the Hornets’ rugged opener at Conway so it was decided he would sit out for precautionary reasons when Bryant visited Little Rock Central on Friday, Sept. 13.

Suddenly, Howard was back at quarterback and offensive coordinator Lance Parker, head coach Paul Calley, running backs coach Dondre Harris and quarterback coach Clint Shadwick were giving a crash course to him and the rest of the offense on a new package of plays designed around Howard.

With no small amount of pressure — the Hornets were staring at the possibility of losing the first two games in a season for the first time since 1996 — Howard and his offensive crewmates stepped up, amassing 437 yards of total offense in a 28-14 win over Central at Quigley-Cox Stadium.

And Howard was no game manager. He wound up rushing for a whopping 180 yards and a score while also hitting 7 of 11 passes for 72 yards and a TD. Brushawn Hunter, playing at running back and wide receiver, caught five of the passes including the TD toss while also rushing for 137 stripes and two touchdowns on just 12 carries.

“For those guys to come out and take a package that we practiced for, really, two and a half days,” started Calley. “We were in a little bit of disarray early, trying to get personnel in and out the way we needed to but I was proud of them. I can’t say enough about the character of those guys. Devonte stepping up under pressure and the supporting cast around him did a great job.

“Coach Parker, Coach Shadwick and Coach Harris did a good job of making that work,” he asserted. “We tried to use misdirection. We ran a lot of inside zone, outside zone.

“I was proud of the offensive line,” the coach continued. “We’re not real big inside. We got pushed around a little bit but I told them, ‘Guys, just move your feet, keep pushing. You’re going to get knocked back some but don’t quit.’ You just can’t say enough about the character of our kids.”

And the Bryant defense, which had been manhandled much of the game against Conway, came through as well, forcing four turnovers. Austin May, Noah Flores and Bryce Denker recovered fumbles and Jake Johnson picked off a pass.

Central wound up with 230 yards of total offense but just short of 100 yards of that came after the Hornets had built a 28-7 lead.

“We controlled the line of scrimmage,” Calley stated. “We had just enough stops on defense. We bent but didn’t break.”

“I feel like we came a ways,” commented Hornets defensive coordinator Steve Griffith. “We played much more aggressively up front. You always want to get to the video and see the details but it just felt more aggressive. We were attacking the football, created several turnovers, had a chance for a couple more. That’s one of our big objectives. We’ve really worked hard at it this year, creating turnovers.

“I’m real proud of the effort, excited about getting back on the practice field next week to see if we can get a little bit better and continue to work towards the conference season,” he added. 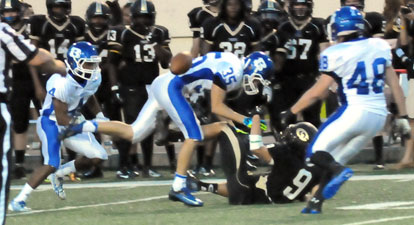 Jake Johnson (35) breaks up a pass completion with a hit on Central’s Tom Coulter (9) with Mark Nelson (4) providing backup. (Photo by Kevin Nagle)

For a while, it looked like the Hornets might have another night on offense like they had at Conway where they squandered a pair of trips inside the 10 with turnovers. They were rolling on their opening possession. When Howard broke a 28-yard keeper, the Hornets were going to have a first down at the Central 17. But a penalty for an illegal block negated most of the run and they wound up having to punt a couple of plays later.

The Tigers drove to the Bryant 10 but, on a second-down play there, quarterback Cooper Westbrook and running back Logan Moragne didn’t mesh on a handoff. A fumble resulted and the Hornets made the recovery to turn back the threat.

With Howard hitting a pair of short passes, the Hornets drove to the Central 28 where, a fumble out of bounds cost them a first down and, on a fourth-down, Brendan Young was stopped short.

Though the defense force a three-and-out, punter Jerry Joyner’s short kick glanced off the shin of a Bryant player who was trying to set up a block for a return. Central recovered to gain a reprieve 33 yards from a score. 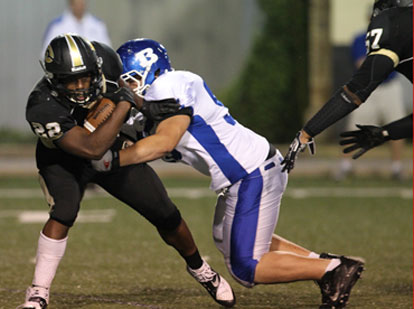 A play later, however, another fumble cost the Tigers. Again Bryant drove it, this time all the way to the Central 1. A third-down play was stopped short then, on a fourth-down try, Young slipped down trying to make a cut and the Tigers had held.

The offense couldn’t muster a first down, however, and a short punt left Bryant with great field position with 2:33 left in the half.

Twice, Howard saved the drive by recovering fumbles. He tossed passes to Hunter for 13 yards and 7 yards on a drive that reached the 19. With time running out, Hunter ran a post pattern and Howard hit him in the seam between the corner and the safety for a touchdown.

The Hornets got a chance to get more too when another fumble occurred. Bryant recovered with :01 showing on the clock. After a timeout, Alex Denker came onto the field to try a 32 yard field goal. Though the kick was plenty far enough, it pushed off to the right at the buzzer.

“I didn’t know how well we’d be able to throw the ball but that touchdown pass was a beauty,” Calley said. “He put it right on the money. Everything he threw was good. He threw a couple that scared me but . . .” 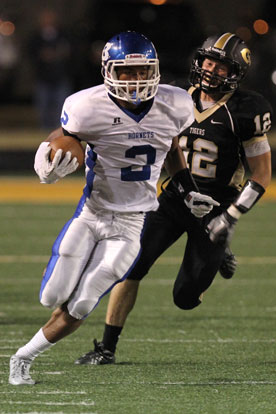 Johnson’s interception ended the Tigers’ opening possession of the second half. Westbrook’s throw was on the money but juggled by the receiver. Johnson flashed and just took the ball away from him.

Just 38 yards from another score, the Hornets’ offense went back to work. Howard kept for 17 yards then converted a third-and-4 with a 9-yard bolt to the Central 6. A play later, he squeezed into the end zone from the 1 and, with Alex Denker’s extra point, it was 14-0.

The Tigers answered, getting good field position when a penalty was tacked on to the kickoff return. From its own 44, Central got the ball to Moragne on consecutive plays. He caught a 13-yard pass then bolted 18 yards to the 25. A horse-collar tackle penalty pushed the ball to the 20.

On the next play, Westbrook threw for the end zone and Drew Tipton nearly intercepted the ball then receiver Chronicle James almost hauled it in off the deflection. But he couldn’t hold it. Two plays later, Westbrook and Moragne hooked up on a 22-yard pass that set up the running back’s 3-yard TD run.

With 6:42 left in the third quarter, it was anybody’s ballgame again with Bryant up 14-7.

The teams traded punts with Bryant improving its field position. From the Central 41, they needed seven plays to get back into the end zone. They had to overcome a 15-yard penalty in the process but Howard sliced and sprinted for 20 yards and, a play later, Hunter hit the corner at full speed and sprinted 17 yards for his second touchdown, making it 21-7.

The Hornets defense gave up a pair of first downs including one on a pass interference penalty but Central stalled at midfield and punted the them back to the 10. 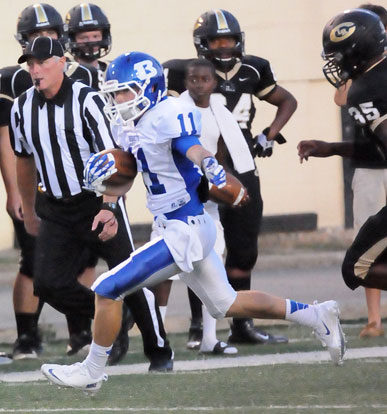 Austin Vail turns upfield after hauling in a pass. (Photo by Kevin Nagle)

Bryant nudged it out to the 24 on three running plays. On the fourth play, Hunter found the corner again and outran the defense down the right sideline, 76 yards for a clinching touchdown.

“He’s got another gear,” Calley noted.

The Hornets turned back one Central drive into the red zone but, after a short punt, the Tigers put together a seven-play drive for a window-dressing score with :36 left in the game.

Now, if you’re Little Rock Catholic, Bryant’s next opponent (in their home opener) next Friday, what do you prepare your defense for?

“The thing that this does is it gives us another package we can use,” said Coach Calley. “It makes other teams have to prepare for our regular offense plus this. It’s going to be beneficial to us down the road.”