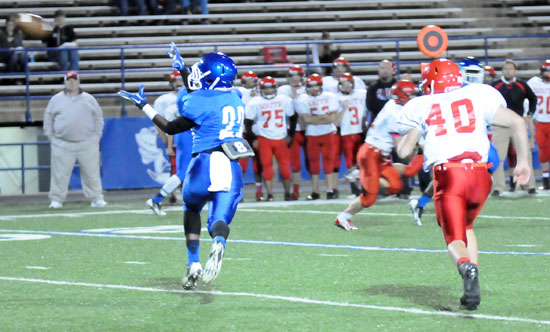 In high-scoring battle, defense steps up in the end in freshman Hornets’ win

In a game in which the two teams piled up 65 points and nearly 700 yards of offense, it ultimately came down to defense in the Bryant Hornets’ 35-30 win over the Cabot South Panthers in a freshman game Thursday night at Bryant Stadium. 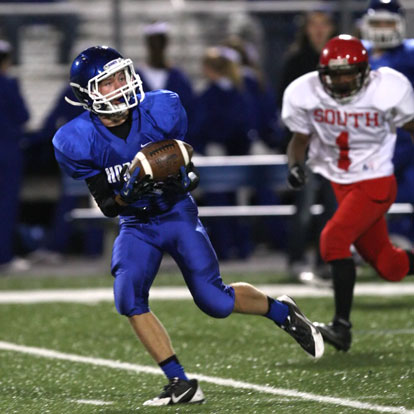 Jake East pulls in a pass on the way to one of his two touchdown receptions. (Photo by Rick Nation)

In a buggy-whip of a game, the Hornets had just regained the lead with 6:04 to play. Cabot South, in the program’s standard powerful dead-T offense was inexorably marching toward what the Panthers hoped would be a game-winning score as they ate up clock.

Aided by a personal foul penalty on a late hit out of bounds, the Panthers had reached the Bryant 34. On first down there, the Hornets’ Madre Dixon drilled running back Connor Daigle, stopping him for a 1-yard gain. On second down, fullback Jeremy Marshall took a handoff on a sweep only to have Bryant’s DeAmonte Terry and Hayden Knowles track him down for a loss of four.

Facing an uncomfortable third-and-13, the Panthers tried to pass but Marvin Moody tracked down quarterback Braxton Burton for another loss, this time for 6 yards.

That left Cabot South with a fourth-and-19 from the Bryant 43 with just a little more than a minute left. 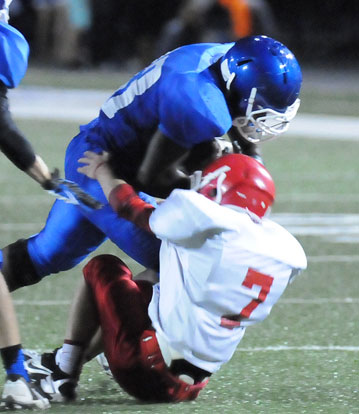 Cameron Coleman, who rushed for 117 yards and a touchdown, bowls over Cabot South’s Braxton Burton. (Photo by Kevin Nagle)

The Panthers had thrown — and completed for touchdowns — just twice in the game to that point but those came as surprises on play-action. This time, the Hornets were back and Landon Smith intercepted at the 12, returning to the 29.

Cabot South, with all its timeouts still left, had hopes of forcing a punt but Terry slashed for 11 yards and a first down. After a timeout, he picked up 5 to the 45. After a second timeout, he busted a 44-yard burst that almost went for a touchdown.

With the ball at the Panthers’ 11, Hornets quarterback Beaux Bonvillain took a knee and the Hornets had nailed down the well-earned victory.

“We made some plays when we had to there at the end,” said Hornets coach Kenny Horn of his defense. “That was big. Just like last week, we had to keep coming from behind. Like I said last week, a few weeks ago, I don’t know if we could’ve won that game. Obviously, we’re making progress.”

It was the third straight win for Bryant, which improved to 6-2 on the season and 5-2 in the Central Arkansas Junior High Conference going into their final home game on Halloween night against Conway White.

It was just the second time Bryant has been able to beat both Cabot freshman teams in the same season. The Hornets defeated Cabot North 20-8 on Sept. 12. 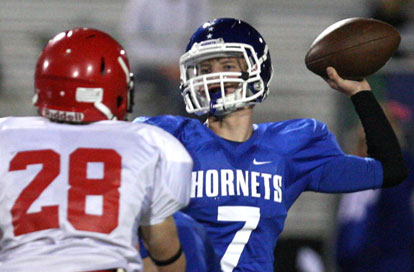 “They’re always hard to play no matter the personnel they’ve got just because of what they do,” noted Horn. “It’s hard to simulate that in practice and it’s hard to stop. It’s a good mindset. I love the mentality of it. I just hate the offense. That’s just the way it is.

“It’s always a good win because it’s difficult to beat them,” he reiterated. “Coach (Lee) Melden does a good job over there. It’s tough playing them. With us and them, it’s kind of back and forth every year. It’s hard to beat both teams in one year like we did this year. Credit our guys. Our coaches did a good job getting them ready. On Thursday night, Coach (John) Orr, Coach (Kirk) Bock, Coach (Travis) Queck and Coach (Mark) Cain just let it go. They do a good job.” 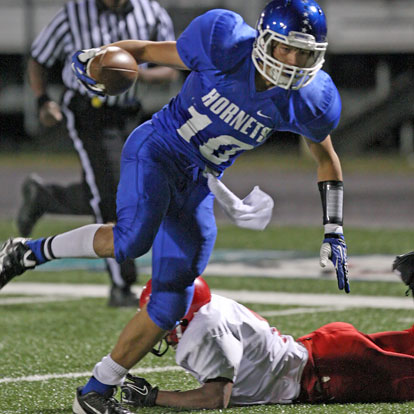 Austin Kelly slips past a Cabot South defender on his way to the end zone. (Photo by Rick Nation)

It might’ve been easier but for Cabot South’s Jarrod Barnes who ran back a kickoff for a touchdown, ran back a second one to the 1 to set up another, threw for a touchdown and ran for another on a quarterback keeper. It might also have been more difficult in Barnes hadn’t been injured early in the Panthers’ final drive.

The difference on the points actually wound up coming down to conversions. The Hornets stopped the Panthers on all five two-point tries.

Bryant amassed 407 yards of offense. Cameron Coleman rushed for 117 yards on 15 carries including a 30-yard touchdown. Bonvillain wound up 8 of 13 passing for 190 yards and four touchdowns, two to Jake East, one to Phillip Isom-Green and another to Austin Kelly. He’s now thrown for 21 touchdowns this season, second only to Brandan Warner’s 26 in 2011 in school history dating back to 1994.

“We threw and caught well tonight,” Horn said. “We had runs when we had to have them. Running the ball’s tough against them. We know it. But sometimes you’ve got to run it and we did. For the most part, we played well.” 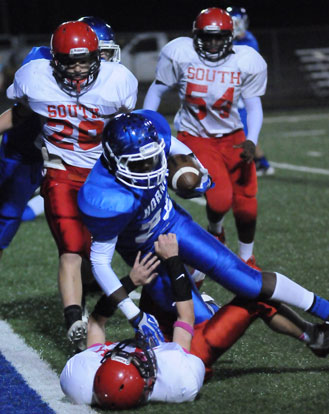 Bryant’s DeAmonte Terry powers into the end zone on a two-point conversion. (Photo by Kevin Nagle)

The Hornets weren’t having much success running it early. But Bonvillain connected with Isom-Green for 19-yard throw then kept for 3 yards to convert a third down. A play later, East got behind the defense far enough that he could slow down to catch Bonvillain’s long pass and still dash into the end zone from 25 yards out completing a 64-yard play.

Coleman ran in the conversion to make it 8-0.

Cabot came right back with its patented dead-T power running game, driving to the Bryant 39 where they faked a run and Barnes heaved a 39-yard pass to tight end Tristan Williams, who had gotten behind the Hornets secondary. The Panthers tried a halfback pass for the conversion but, under pressure, Austin Morse’s throw fell short.

Bryant took its turn and drove from its own 35 to the Cabot South 27. The big play was a 28-yard burst by Coleman. A blocking penalty pushed the Hornets back on the next play and they actually faced a fourth-and-18. Bonvillain was flushed from the pocket, avoided a pair of rushers, rolled to his left and fired a strike to Isom-Green who was short of the first down when he made the catch but he laced his way through the Panthers’ secondary, breaking tackles along the way and wound up scoring.

The Hornets lined up to for Chase Kincaid to kick the extra point this time but when Cabot South was cited for being offsides, moving the ball just outside the 1, Horn sent his offense back on the field and Terry scored on a sweep to make it 16-6.

That’s when Barnes broke his 80-yard return for a touchdown on the kickoff.

Again, however, the two-point conversion was foiled when Terry and Moody corralled Morse.

The Hornets secured Cabot’s onside kick with Boston Heil pouncing on the ball but they were forced to punt. In turn, the Panthers couldn’t muster a first down. Facing a fourth-and-3 from their own 32, they went for it and Bryant stacked up Marshall.

The Hornets took over on downs with a short field and took advantage. After three runs by Coleman got the ball to the 21, Bonvillain found East for the touchdown with 3:35 left in the half. Kincaid kicked the PAT and it was 23-12.

On the ensuing kickoff, however, Barnes got loose again and would’ve scored but for a tackle at the 1 by Smith who was hustling in pursuit. Marshall, however, scored on the next play and it was 23-18.

Kale Kimbrough recovered Cabot South’s short kickoff this time but the Hornets’ stalled when a third-down pass was dropped. Kelly punted it away and Cabot used up the final 1:37 of the half.

The Panthers got the ball to start the third quarter and marched to a go-ahead score. They appeared to be stopped when Kelly and Dixon hauled down Morse for a loss of 10 after Cabot had reached the Bryant 36. On the next play, however, Burton scampered 24 yards to pick up a fresh set of downs. He would eventually sneak it in from the 1, giving his team a 24-23 lead.

It didn’t last long, however. The Hornets drove 72 yards in five plays. Bonvillain hit Isom-Green for 18 yards to convert a third down and, after Coleman rumbled 17 yards, Kelly out-reached a Panther defender on a fade route, cut back past him and scored on a 35-yard play.

Bryant 29-24 lead didn’t last long either, though. Barnes converted a third down with a 25-yard pass to Williams and, a play later, kept around left end for a 39-yard touchdown run that put the Panthers back on top by a point with 6:57 left in the game.

Bryant’s decisive touchdown drive began at its own 36. Bonvillain faked to Coleman and kept for the first time all night and it broke big. He picked up 32 yards. A play later, Coleman scored to make it 35-30.