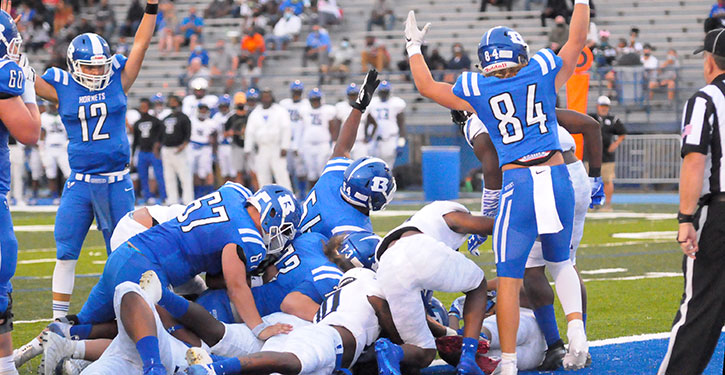 After their three non-conference games, Bryant Hornets head coach Buck James sat down to talk about the progress of his team on Thursday as they prepared to host the Fort Smith Northside Grizzlies on Friday night. It’ll be their 7A-Central Conference opener.

Though the Hornets have won back-to-back 7A State championships, they’ve only captured one conference title. That came last year as part of their 13-0 season.

James’ started his assessment with his defensive line, a question mark at the beginning of the season.

“They have probably played above and beyond where we thought they would be,” he said. “I’m really proud of the way those guys play, being undersized and outmatched probably in every game we played this year. For them to play as well as they’ve played, I think it’s hats off to Coach (B.J.) Schuler and Coach (Quad) Sanders and what they’ve been able to do.”

The Hornets went deep into their bench on the d-line in the first two games, mercy-rule wins over Benton and Marion. Against Cedar Hill, Texas, Trinity Christian last week, Rodricho Martin, Andy Scott and Brayden Godwin were mainstays. Christian Del Castillo played well in combination with Brandon Jones. Sophomore Jaylon Russ got into the prime-time action and, offensive tackle Will Diggins, played some late on defense.

“Our linebackers,” said James, “we took a big hit there last year. But, you know, those guys are doing a good job. We’re playing a lot of kids there and Coach (Travis) Queck and Coach Sanders again have done a great job with those guys.

“So, I give at least A-minuses to both of those squads in the last two years,” he stated. “I think we can tackle better probably at the linebacker position, but I think we’re going to get that fixed.”

“Our d-backs are probably our most experienced group,” James continued. “You know, I’d have to give them a C-plus or B-minus with what they’ve done. We’ve given up a lot of passing but we’ve seen some really good passing teams and some really athletic receivers. So, in all fairness to them, the way the rules are and what goes on in with offensive plays, it’s tough to stop people from throwing the football.”

Bryant has allowed 644 yards passing but more than half of that was put up by Trinity’s star Shadeur Sanders and his corps of receivers last Friday.

“I feel good about our secondary,” the coach said. “I think they’re going to get better. I think they’ve gotten better every week and I think they will, by the end of the year, probably be the strongest unit on our team.

“We need some guys to develop through our JV program and practice. We need to create depth. We’ve got guys that are playing too many snaps and I think that, as we can create depth, that will help those guys a lot.”

The starters in the secondary are corners LaQuav Brumfield and Kyle Knox, along with safeties Kaleb Knox and Austin Schroeder. Sophomore Malachi Graham has the team’s lone interception and was the nickel back for the Hornets against Trinity. Jalun Davis and Noah Davis have a chance to help supply some of that needed depth.

Brumfield and Kaleb Knox lead the team in pass break-ups with three each. Jalun Davis and Schroeder has two each.

Regarding the offense, James said, “Obviously, I think our running backs have done really good. I feel like that they’ve performed well. And, really, we’ve played four running backs pretty much throughout the season, and I would say all of them have done a tremendous job.”

Tanner Anderson leads the Hornets in rushing with 267 yards on 37 carries. He’s also caught six passes for 81 yards. He leads the team with five touchdowns.

Bracey has 206 yards on 21 totes. Xavier Foote had a big touchdown run after catching a screen pass against Trinity. Mytavious Singleton and Chris Gannaway have run the ball well.

“Our offensive line has played very well,” James said. “I’d say that they’ve been a plus for our team. They’ve run blocked and passed blocked very well.”

Across the offensive line, it’s primarily by Jacob Powell at center, Parker Elswick and Jason Shifflet at the guards with Diggins and Brooks Edmonson at the tackles.

“I think our quarterbacks have played well,” continued the coach. “You know that’s probably the most scrutinized position on the field. I think those guys have done a heck of a job.”

Senior All-State starter Austin Ledbetter, who’s in the process of re-writing the Hornets’ record book for passing, is 43 of 67 so far this year for 779 yards and nine touchdowns. Sophomore Cory Nichols and junior Carson Burnett saw playing time against Benton and Marion.

Nichols and Jordan Knox have stepped in at receiver along with returning starters Hayden Schrader and Joseph Young. Seth Everett and River Gregory have gotten some playing time and Robert Hendrix stepped in as an H back against Trinity.

“Our receiving crops, which took a pretty good hit in graduation, you know those guys have done well,” James said. “We’ve had some injuries and stuff with those receivers, but I think offensively, we’re solid A going through the non-conference schedule.

“You know, the biggest thing with those guys is to stay healthy, still keep creating depth on our offensive line and receiving positions, keeping the running backs healthy and our quarterbacks healthy, but overall I think our offense has done a really, really good job.”

The Hornets have accumulated 1,405 yards of offense in three games.

Regarding special teams, James said, “I think special teams have been A-plus. I mean I think we’ve played really well. We’ve had some problems covering kickoffs and getting the kicks where we want to have them, at times. We’ve missed a few extra points but we’ve kicked a lot extra points too and kicked a lot of kickoffs.

“We haven’t punted a lot, but I think we’ve done a good job punting and pretty much trying to keep the ball from bouncing a lot on the punt returns. We haven’t had a blocked kick yet. Hopefully we can get a couple.

“But I would say that we’ve been a solid A in our kicking game as well and Coach (Adam) Pendergrass has done you know an outstanding job. I think the last two or three years, we’ve been as good as we can be on kickoff team and we use a lot of guys who don’t start for us on offense or defense. They take a lot of pride in being a starter on special teams. It helps us a lot.”