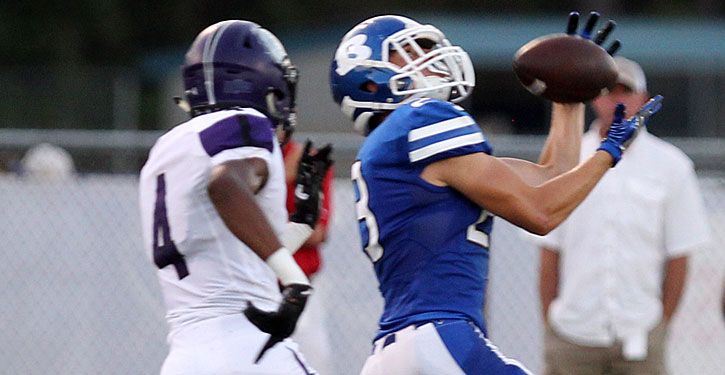 It may have turned out to be a lopsided loss to the top-ranked team in the state but, after looking at the game film, Bryant head coach Buck James saw some good things from his Hornets.

“I thought we played better,” he said. “I know the score doesn’t show it but we played better. We just had too many mistakes, two fumbles and a blocked punt and a snap over the head (of the punter).

“We’ve got to find what we’re good at,” the coach added. “We’ve got plenty of stuff in. We’ve just got to do what we do. And do it well. I think that will help us a lot. If we can keep improving each week, it makes a big difference.

“It’s all relative to how good a team we’re playing that week but, if we keep improving, eventually we will get where we want to get to,” he said. “That’s the way our kids and our coaching staff have got to look at it.”

In the team’s two games, the offense has averaged 190 yards of offense and has scored 10 points in each game.

“Fayetteville had a lot of veterans and really only had a head coaching change for the most part,” he noted. “So everything sort of stayed in place. We’re still learning the kids.

In Lake Hamilton, the Hornets will be facing a team that’s made more radical changes with their new head coach Jeremy Reed, who is new to Arkansas after coaching in Oklahoma.

James, understandably, is more concerned about his own team’s progress.

He allowed that some of the problem with that has been that what they’ve scouted of their opponents hasn’t been what they’ve been getting.

“I guess the word’s out, is what I’m saying, that they know how to stop or confuse what we do,” James said. “We’ve seen it all now. There’s not anything that we could see that we haven’t seen. So, it’s on us now if we don’t get it learned and get it where we can execute it.”