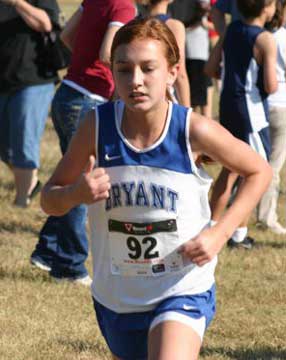 HOT SPRINGS — The Bryant Junior Lady Hornets had all of their scoring five runners receive top 30 medals and almost pulled off a stunning team upset Saturday at the Lake Hamilton Invitational at Oaklawn Park.

Bryant had struggled to put together a good team performance in the past weeks but came through with a strong runner-up performance losing by only 2 points. Little Rock Christian won the meet title with 76 points. Bryant had 78 points. Lake Hamilton was third with 100 points. There were 16 teams and 240 runners in the race.

“Our junior girls ran great today,” praised Bryant coach Danny Westbrook. “We put together our best team effort of the season so far. I am seeing big improvements each week and I have to credit our middle school coaches, Deanna Porter and Rhonda Hall. They are doing a fantastic job with our younger runners.”

"Jenna Freeman and Caitlyn Bell really came through big today,” Westbrook noted. “Sam Macchi made her debut in the top five this week and it was great to have Caroline Cato back from an injury.”

Next up for the Bryant program is the prestigious Chile Pepper Cross Country Festival held in Fayetteville next Saturday.