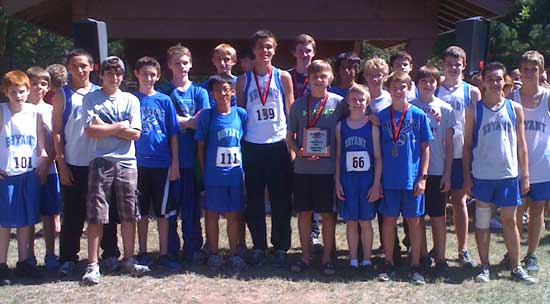 RUSSELLVILLE — The Bryant Junior Hornets claimed their second consecutive team championship of the[more] season at the Russellville Cyclone Invitational Saturday. The Junior Hornets, running without top runner Connor Wilson, won the meet with a total of 72 points, outpacing Russellville (89 points), and 17 other teams. Wilson rested this week after suffering a slight hip injury.

“We told the guys that we were really going to have to step up since Connor Wilson wasn’t running,” said Hornets coach Steve Oury. “They did in a big way. All of our top runners ran well.

“Charlie Terry loves to compete, as does Mark Winn,” he added. “I thought Jim Dellorto did a great job after getting boxed in at the start and having to work his way back up through the pack. Ben Majors and Dru Wen are also doing a great job. Wen works as hard as anybody on the team, so it’s just a matter of time before he puts a great race together.”

The Bryant cross country teams will be back in action next Saturday at the Lake Hamilton Invitational at Oaklawn Park in Hot Springs.