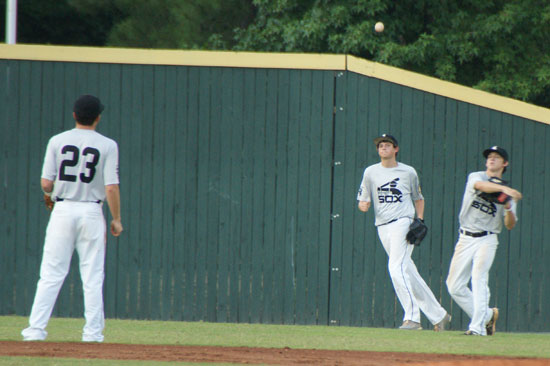 Drew Tipton throws a ball in from right field to second baseman Connor Tatum (23) after making a catch in front of centerfielder Hunter Oglesby.

With the winners bracket final of the Junior American Legion Regional Tournament tied 2-2in the top of the sixth, the Everett Black Sox loaded the bases against the Little Rock Post 1 Cobras. Evan Lee and Blake Patterson each worked walks to start the inning then Hunter Oglesby sacrificed them to second and third. With the infield hit, Cobras’ starter Austin Chumley got a second out on Connor Tatum’s pop to shallow left that was tracked down by speedy Jarod Collier. 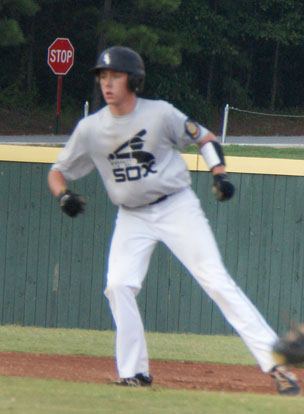 Blake Patterson leads off first base.

Any momentum Little Rock garnered from getting two outs in the inning disappeared when Harrison Dale drew a walk to load the bases. Bryant catcher Trey Breeding, who had singled in a run in the second, came to the plate and battled with Chumley. The count went to 3-2 with Little Rock catcher Jack Lee saving a run by blocking a pitch in the dirt on the third ball. Breeding fouled the first 3-2 pitch out of play. The second, he skied down the left-field line, fading towards the fence. But Collier sprinted in and over and got to the ball just as he hit the wooden fence. He couldn’t hold on (and would later need to be patched up after scraping his left arm on the wood.)

On the next delivery from Chumley, Breeding lofted a pop into right-center. With Little Rock centerfielder Ryan Panyard playing deep and shaded slightly to left and right-fielder Adam Wright playing toward the line, the ball appeared to be headed for no-man’s land. With two out, the Sox’s base-runners were off on contact.

Panyard made a splendid attempt on the ball after sprinting across the outfield and in. He got a glove on it about shin high at a full sprint but couldn’t haul it in.

Lee and Patterson scored to snap the tie and Dale hustled to third as the Sox took a 4-2 lead on the clutch single.

Brandan Warner came to the plate and the first pitch to him from Chumley got past his catcher and Dale scored to make it 5-2. Warner creamed a 2-2 pitch to right but Wright busted it coming in and caught the liner to end the inning.

No less important was Patterson’s two-out, two-strike RBI single in the top of the seventh, scoring Drew Tipton who had opened the inning with a single because the Sox had to hold on for a 6-5 win. Bailey Bowers, the third Bryant pitcher, came on and got the final two outs, stranding the potential tying run at third and the potential winning run at first.

So, on Monday, Bryant will take on Jacksonville Gwatney Chevrolet at 7:30 p.m., in a rematch of the Junior State Tournament championship game. At 4:30 p.m., Little Rock will battle Texarkana, Texas, in an elimination game. The survivors play on Tuesday with the Regional title on the line.

“We’re in the championship game on Tuesday night,” observed Sox coach Tyler Brown. “But we want that game tomorrow (Monday). We’ve got to go get that because I believe that nobody in this state can beat us twice. That’s just what I believe. And those kids believe that. So we’re going to come out here and give them our best shot.”

“We needed a scratch,” said Brown of the crucial sixth-inning. “We’re the away team going into the top of the sixth. We know we don’t have many chances left. Breeding had some good at-bats all day long. He was seeing the ball really well and, you know, sometimes all it takes is one play to win a ballgame.

“I do not think that won the game for us but I do think that play was a huge factor,” he added. “He had a good approach up there. He had a 3-2 count, fouled a couple off and, in the end, he got it done. We were very fortunate with the ball dropping.”

Regarding Patterson’s single, which gave Bryant a 6-3 lead at the time, Brown said, “I was telling everybody in the dugout, we need one more to win this game. Patterson had full confidence. That’s a big thing, going up there with a lot of confidence. It was another 3-2 count and he ended up linking up one right up the middle. It was a huge run. If we don’t score that run, we’re still playing.” 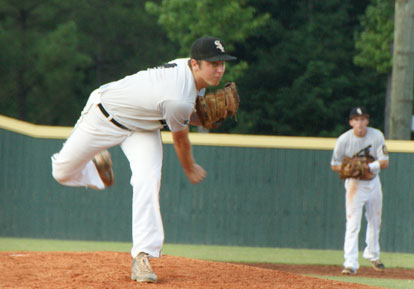 Bryant starter Devin Dupree had limited Little Rock to just three hits and a pair of runs in the first five innings. He’d had to battle through three walks, a balk and five wild pitches, however. To start the home sixth, he hit Jack Lee and, much to Dupree’s disappointment, Brown made the change, bringing on Dakota Besancon.

“Dupe did a good job,” Brown stated later. “He gave us everything he had. We could see him start to struggle a little bit. He wasn’t throwing that breaking ball for a strike like he had been. He just started to lose it a little bit; usually not enough to pull him but, in that situation, it was my gut feeling to go to Besancon.”

Brock Ferguson singled and Panyard walked to load the bases. Besancon retired the next three batters. Colton Fisher came through with a sacrifice fly but one was all the Cobras could get.

Tipton singled to open the seventh and a hit-and-run with Dalton Holt up proved vital as the Cobras had no play at second on a grounder to short. Tipton continued to be aggressive (as usual) on the basepaths when he tagged and advanced to third when Evan Lee’s fly to right-center was tracked down by Panyard. That set up Patterson’s RBI single, which proved to be huge when Little Rock rallied in the bottom of the inning.

Besancon got Wright on a one-hopper back to the mound but then Joe Hampton singled to left and Luke Van Dover walked. A wild pitch moved the runners to second and third as Jack Lee walked to load the bases.

Brown brought on Bowers at that point and he got Ferguson to hit a grounder to short. Dale made a sparkling play to get to the ball in the hole. At first, he looked to third but Warner had tried to make a play on the ball and wasn’t at the bag. So Dale turned to second with a rushed throw that skipped in to Tatum. All hands were safe including Hampton, who scored to make it 6-4.

Bowers got Panyard to hit a grounder to Tatum and, though he bobbled it, he got the ball to Dale for a force at second. But the delay took a doubleplay out of the picture as pinch-runner Trevor Whitlock crossed the plate to make it 6-5 with two out.

Collier hit the next pitch solidly toward the right side. Holt, from first, started to go for it but pulled away as Tatum came over. Holt just got back to the bag in time to take Tatum’s throw and nip Collier to end a doozy of a game.

“Bowers has been that guy, when we get into tough situations,” Brown noted. “He comes in with the bases loaded again, just like the District championship game. Bowers is one of those guys. He gets that look in his eye. He’s going to give you his best and say, ‘Hit it.’ That’s what he did tonight and we came out with a victory.

Bryant improved to 36-1 on the season. The lone loss was in District Tournament play to Little Rock so it was a sweet victory.

“We’ve kind of been struggling with the bats,” Brown related. “But we’re manufacturing runs. We’re playing team baseball right now. We’re laying down good bunts. We’re executing the hit-and-run, running the bases well and, the most important thing, we’re playing good defense. That’s what you’ve got to do to beat a good baseball team.”

Dupree didn’t allow a hit in Sunday’s game until a one-out single by Dylan Hays in the third. He got nice help from his defense in the first as Dale started an inning-ending doubleplay after a one-out walk to Van Dover. Holt robbed Ferguson of a hit in the second.

Meanwhile, the Sox took a 2-0 lead. In the first, Tipton, who’s been on base eight of his 12 plate appearances in the tournament, drew a walk. Holt waited out a free pass but then Chumley induced a doubleplay ball. With Tipton at third, it was shades of things to come as Patterson cracked a 2-2 pitch into left-center for the RBI single.

In the second, Tatum singled up the middle and Dale sacrificed him to second to set up Breeding’s RBI single.

Chumley settled in after that and retired 11 of the next 12 Bryant batters, giving his teammates a chance to tie it up. The Cobras got a run in the fourth when Ferguson blooped a single to right-center, two second and third on wild pitches then scored on a balk.

Dupree walked Panyard but got Collier to fly out to Lee in left.

In the fifth, Hays lined his second single to center. A wild pitch got him to second and another allowed him reach third as Wright drew a free pass. Another wild pitch, however, allowed Hays to score the tying run.

Dupree retired the next two to keep it 2-2 going into the sixth.