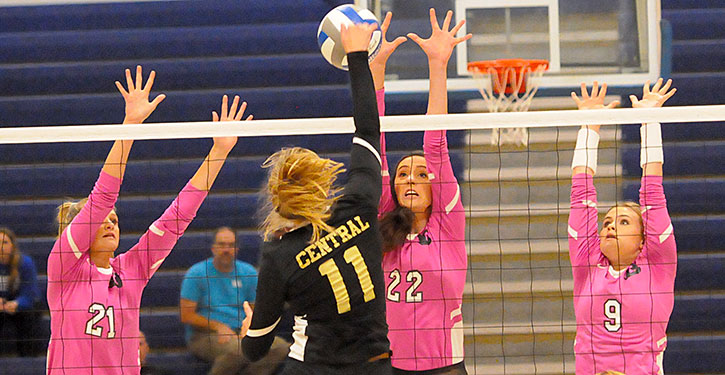 It was almost as much a relief as it was a celebration Tuesday night after the Bryant Lady Hornets pulled out a 3-1 victory over the Little Rock Central Lady Tigers at the Hornets’ Nest.

“It was ugly, but we found a way,” said Lady Hornets head coach Leigh Ann Back. “They decided that, no matter how bad they played, it was worth fighting for.”

The relief also came at the end of the fourth set. After a strong third set, the Lady Hornets had surged from an early deficit to build a 23-17 lead. They were at match point with a 24-18 advantage but that last point proved hard to get. The Lady Tigers whittled the margin to 24-22 before Bryant’s Ella Reynolds ended it with her 10th kill.

Defensively, Jackson came up with 31 digs. Still and Reynolds had 16 each and Hernandez 13.

Central started each of the first two sets well. In the opener, it was 7-3 before a kill by Hoskins started a turning of the tide. A kill by Ferguson got Bryant back to within a point. The Lady Hornets eventually tied it at 13 on a block by Bates.

With Reynolds serving, Bryant surged into the lead only to have the Lady Tigers counter. The match was tied at 16, 19 and 20, the latter on a kill by McCallister. Still then hit for three consecutive aces but when Central forced a side-out, it led to a final surge to victory for the Lady Tigers.

Central led the second set early as well. Bryant tied it at 6 after a kill by Hoskins and an ace from Still. After it was tied at 8, Ferguson forced a side-out with a kill and, with Jackson serving, Reynolds’ kill pushed the lead.

Land added a pair of successful attacks to help the lead grow to 15-10 before the ebb and flow resumed. The match was tied at 17, 18, 20, 21 before a hitting error cost the Lady Tigers and the Lady Hornets were able to close out the win, as Reynolds drilled a kill for the clincher.

Confident from that set, the Lady Hornets came out hot in the third. Bates, Reynolds and Hoskins had kills in the early going and Hernandez served up a pair of aces. When Bates and McCallister had back-to-back kills, the lead was up to 8-3.

Bryant never trailed in the set. A serving error by the Lady Hornets allowed Central within 13-7 but the Lady Tigers returned the favor. With Jackson serving, her two aces, a pair of kills by Reynolds and another by Bates had the Lady Hornets ahead 21-8. Hoskins eventually closed out the win with a kill.

The Lady Hornets may have relaxed a little bit to start the fourth set. Central opened up a 7-1 lead. When it was 12-4, Bryant broke serve with a kill by Ferguson then, after tremendous digs by Still and Erin Thompson, Reynolds added a kill.

The Lady Tigers broke serve but, as often happened during the match, couldn’t maintain control. A serving error cost them and, down 8-14 the Lady Hornets rallied into the lead with Hernandez serving. A block by McCallister, and an ace resulted in a Central timeout.

When play resumed, Hernandez served for another ace and the onslaught resumed. Kills by Reynolds, McCallister and a block by Bates had Bryant ahead 16-14.

Central forced a side-out but a hitting error cost the serve. Hoskins had a kill and McCallister scored on a dink and the Lady Hornets were never headed until that last surge by the Lady Tigers that came up just short.

The Lady Hornets play at Fort Smith Southside on Thursday.