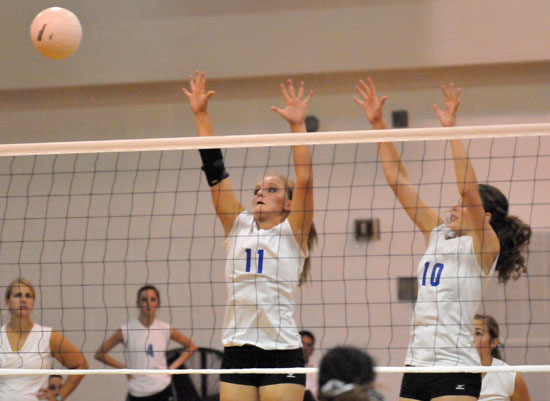 Consistent play and hard hitting were two of the main factors that led the Bryant Lady Hornets’ three-game[more] sweep of visiting Texarkana on Thursday afternoon at Bryant gymnasium. 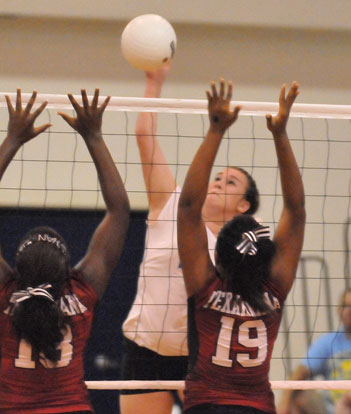 “It was a good game,” Bryant coach Beth Solomon said. “We knew Texarkana would be good and could hit coming into tonight. Our girls were excited and ready to have some real good competition. That was great. They had some good hitters. They were a scrappy team, but we just pulled it out.”

Brooke Howell, Alyssa Anderson and McKenzie Rice all had kills to start the first game, while Hannah Rice tipped a ball over for a 4-0 lead. Texarkana rallied back to stay close, but Anderson served two aces and Courtney Davidson was credited with a block for a point for an 11-4 Bryant lead.

Davidson got a kill and a block to go with Hannah Rice’s kill during an 8-0 run while Abby Staton served. Both McKenzie and Hannah Rice ended the game with consecutive kills after Texarkana came back to get as close as 23-15. 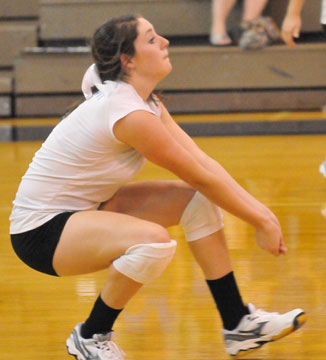 The second game started with a Hannah Rice kill, followed by a Howell spike and an Anderson ace that made for a 5-3 lead early. Texarkana got as close as one point, 7-6, but Howell and Davidson had back-to-back kills for Bryant. McKenzie Rice accounted for the next three Lady Hornets points with two slams on Texarkana defenders and a block.

Davidson had two kills and Howell got a point as the Lady Hornets completed a win in game two with the last three points.

Texarkana tied the Lady Hornets three times early in the third game, but a block by McKenzie Rice set Bryant on a rally with Anderson serving. Both the Rice sisters got kills and Anderson served an ace for a 17-11 lead. Texarkana could get as close as five later in the game, but two straight aces from Davidson ended the contest.

“In that third game the heat was just starting to wear and tear on them,” Solomon said. “But they pushed through and helped each other. This is a good group. They play more and more consistent the more they play. 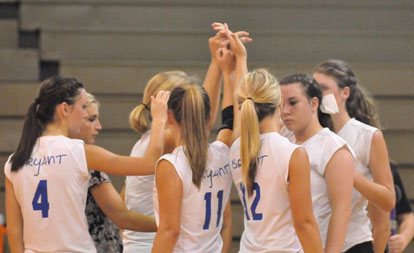 “We’ve got a team full of seniors which is great for this year, but they play together and have since seventh grade,” the coach continued. “This is one of the first groups of girls who will talk to each other and help each other on the court without feeling like they are getting yelled at.”

Davidson led with 10 kills. McKenzie Rice had nine, Hannah Rice six with Kaylon Wilson and Anderson contributing four each. Hannah Rice finished with 25 assists. Staton came up with 10 digs and was 14 of 14 on her serves. Anderson was 24 of 25 with seven aces.

Bryant also prevailed in the junior varsity match, 25-10, 25-13. Erica Smith had five kills and Emily Henson three as seven different players contributed with scoring hits. Mercedes Dillard led with nine assists and Nikki Clay contributed seven digs. Madison Greeno was 18 of 18 serving with three aces. Henson was 9 of 9 with two and Rylee Phillips contributed three aces while good on all six of her serves.

The Lady Hornets varsity is scheduled to return action at Sheridan on Tuesday, Sept. 11. They’ll play in a tournament at Russellville High School on Saturday, Sept. 15.