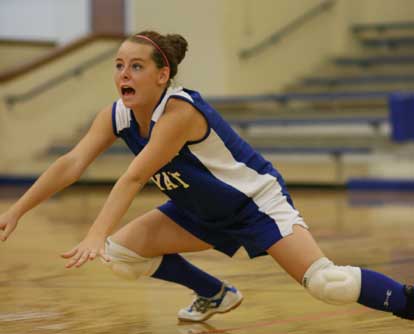 With eight seniors and an infusion of talented sophomores, the Bryant Lady Hornets open the 2009 season at Lake Hamilton on Thursday, Aug. 27.

Beth Solomon, who had been serving as the team’s assistant coach in recent years, has taken over the head coaching job and, so far, she has liked what she’s seen. The Lady Hornets participated in a jamboree in Benton last Thursday and that, Solomon said, helped dictate practice since.[more]

“I think some lights definitely came on,” she stated. “We sat down on Friday and had a long team meeting and re-made our goals for the season. And the girls are definitely off to a different start.

“We played okay at the jamboree but not as well as we should have by far,” she continued. “This week in practice they’ve looked pretty good, stepping it back up to how we were playing.

“I think as far as playing together on the court they looked much better. (Monday) our serve-receive looked better. They talked to each other. They encouraged each other more. And that’s something that comes after you’ve played that first set of games which is why we like to play jamborees at the beginning of the season.”

Entering Thursday’s match, Solomon said the starting rotation of players will include Armstrong, Baker, Davidson, and Shutt with sophomores Hart, Reed and White. Davidson and White will be the middle hitters with Hart and Shutt on the outside.

“Amber Cope may rotate in some there,” noted the coach. “Jordan and Kasey will be playing all the way around. Not only are they super strong setters they’re our best all-around players.”

She added that Light, Hays and Crider are battling for back-row time.

“I really think we’re going to be more of an offensive team,” Solomon said. “Just because we do have our power hitters. At the same time though, we have the back-row girls that are going to move and get the ball up. Lauren Reed is probably one of the best defensive players we’ve had in recent years. She’s quick, she sees the floor, she’s going to get to the ball.

“Our hitters can put the ball down this year,” she emphasized. “They’re good at what they do, if they’re on.”

Solomon will be assisted by Julie Long.

“Coach Long and I work really good together,” Solomon said. “I’ll cover more of the team approach to it and more of the back row stuff, passing, setting. She’s better at the hitting, the blocking and that kind of stuff. Working that way, we can catch more stuff and be more active on correcting mistakes.

“Overall, my goal is just to get the girls to build up their confidence,” she added. “That seems to be what kills us right now. They don’t have the confidence to do it. But that’s coming. Every time they play, they get more confident. With eight seniors, we have more team leaders too.”