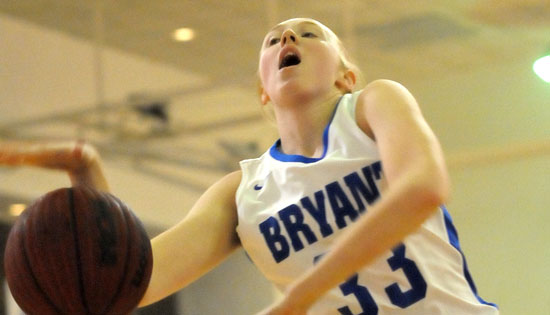 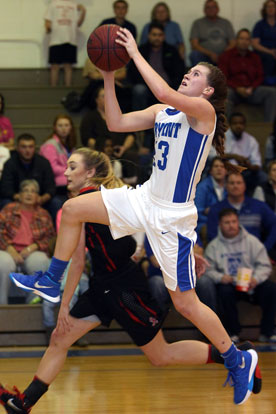 After being held without a point in the second quarter, the Bryant Lady Hornets needed a spark. With the Russellville Lady Cyclones face-guarding top scorer Raija Todd just about everywhere she went and double-teaming her when they could, somebody else needed to step up as the third quarter unfolded with Russellville up 21-16.

The Lady Hornets ran a play to get Kendal Rogers an open look from the 3-point line in the left corner. Rogers, who doesn’t usually shoot very often, proceeded to bury the 3 to end Bryant’s dry spell.

Russellville pushed the lead to 27-19 but, after a timeout, the Lady Hornets ran the same play and, again, Rogers knocked down the triple. And when Taylor Hill grabbed the rebound off a teammate’s miss in the final minute of the quarter and scored, the Lady Hornets were within 27-24.

Raven Loveless hit a jumper in the lane to start the fourth quarter, trimming the margin to 1. Russellville’s Shameka Ealy tried to slow down the Bryant surge with a three-point play. But, after both teams missed, Loveless made a steal and a basket to cut the lead to 30-28. Moments later, Rogers canned a 12-footer that tied the game up.

And the Lady Hornets went on to stun the Lady Cyclones, 37-36.

Russellville regained the lead with two free throws by Alyssa Owens with 4:31 left only to have Rachael Miller deliver a basket from the lane and, after a Lady Cyclones turnover, Rogers sank a free throw that gave the Lady Hornets a 33-32 edge with 3:04 left.

Ealy’s free throws put her team back on top but Todd hit a clutch 12-footer from the left wing with 1:20 to go, giving the Lady Hornets the edge again. 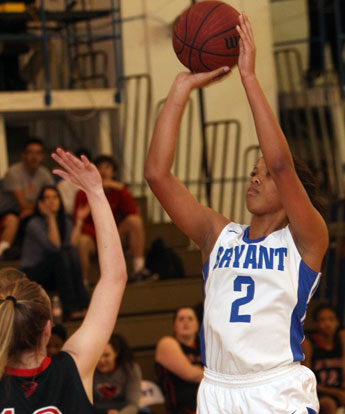 At the other end, Ealy tried to get room inside only to have Miller and Loveless double-team her and force a turnover. Todd drove for another layup and Bryant was up 3 with :55 showing.

Ealy tried to step out for a 3 but it rimmed out and Bryant rebounded. The Lady Hornets drained some clock but turned the ball over with :26.4 to go. Russellville called a timeout but, when play resumed, couldn’t get an open look at a 3 against the active Bryant defense. So Emily Posey drove for a layup to cut the margin to 1 and Russellville called timeout with :04.3 showing.

But they had only committed three team fouls to that point. Bryant inbounded the ball three times and Russellville fouled three times but on the fourth inbounds play, time ran out before the Lady Hornets ever even got into the bonus.

The Lady Cyclones came into the game with an 18-4 record and ranked No. 1 in Class 6A. Bryant is a 7A member of the 7A/6A-Central Conference.

“Defensively we did a really great job,” said Lady Hornets coach Brad Matthews. “They’ve got a Division I signee in Ealy. She’s going to Missouri State. To hold her to 11 points, I thought Rachael Miller did a great job. Raija Todd was able to hold Owens, who’s a college player, to 7. We keyed on their leading scorers.” 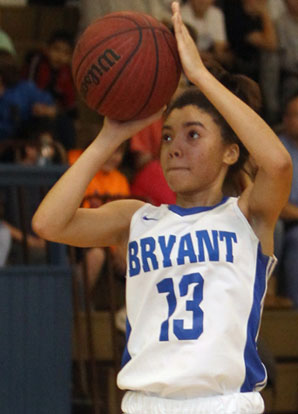 “Kendal hit those big 3’s and Raven just keeps getting better and better,” Matthews said. “Destiny Martin gave us a lot of energy on defense.

“It’s just a good win,” he emphasized. “You know, against Van Buren (in their previous game on Friday), we had about 28 minutes of really good basketball then didn’t finish the way we wanted.

“But tonight, you know they’re No. 1 in 6A, a top four or five team in the state,” the coach said. “That just shows the growth of our kids. From where we were in November and December to be able to beat the number one-ranked team in 6A in February, I think that just shows how much growth we’ve had. It’s a tribute to our kids and their hard work and their willingness to listen and execute our game plan and do really good stuff in practice day after day. I’m happy for our kids. With that hard work, they deserve some good wins down the stretch.”

There are just three regular-season games left for the Lady Hornets. They travel to Alma this Friday then to Conway on Feb. 23 before closing out at home against Siloam Springs on Feb. 26.

Todd finished with 15 points including 11 in the first quarter when the Lady Hornets ran out to a 16-10 lead. Rogers wound up with 9 points, all in the second half. Loveless scored 7 while hauling down 11 rebounds.

Bryant trailed 6-2 early but then Todd started to find the range. She hit a jumper in the lane and followed up with her first 3, giving Bryant a 7-6 lead. Owens tied it with a free throw only to have Todd nail another triple. Ealy answered from long range to knot it at 10 but Loveless hit a free throw to snap the tie and Martin made a steal that led to a hoop by Loveless. In the final 30 seconds, Todd drained her third trey of the quarter and it was 16-10.

But the Lady Hornets were unable to score in the second period. Ealy hit a 10-footer and added a free throw with 4:19 left in the half. She would not score again until the fourth quarter.

But 3’s by Tori Underhill and Posey produced the 21-16 lead at the half.