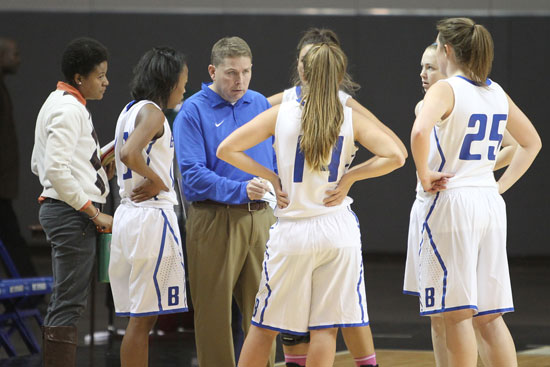 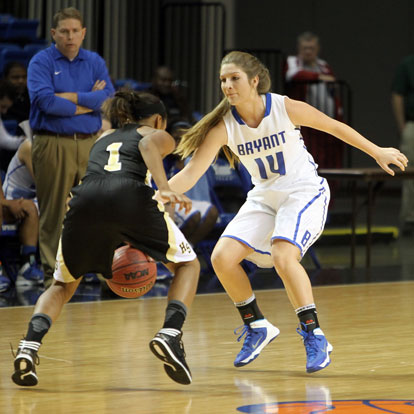 HOT SPRINGS — A surge late in the first half and a big third quarter lifted the Hot Springs Lady Trojans to a 51-25 win over the Bryant Lady Hornets in the first round of the Spa City Shootout at Summit Arena on Friday.

The game was tight going into the final three minutes of the first half but Hot Springs went on a brief run to get some separation then out-scored the Lady Hornets 20-9 in the third quarter to take control of the game.

Bryant continued to struggle to score. The game was the Lady Hornets’ third in a row in which they were unable to break 30. They’d started the season with two wins with over 60 points each and another with over 50. 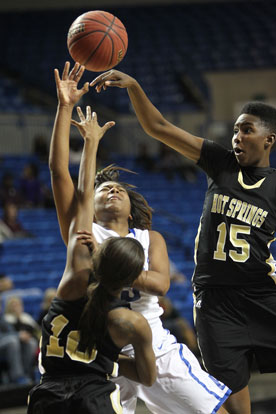 Jayla Anderson tried to get a shot off in traffic. (Photo by Rick Nation)

“I thought our defense was good for the majority of the game,” he noted. “But even though we’re struggling to score, with about three or four minutes left in the half, we’re right there within striking distance. We just can’t get anything going offensively. That falls on me. I’ve got to get them in better positions where our kids can make plays.

“When you don’t score, it just puts a strain on every other facet of your game,” the coach said. “We’ve just got to continue to grow and continue to improve.

“Jakeria played better in spurts,” Matthews commented. “There were periods in the game where she attacked like we need her to.

“I thought Annie Patton came in and gave us some good minutes,” he continued. “I think she had four or five rebounds.” 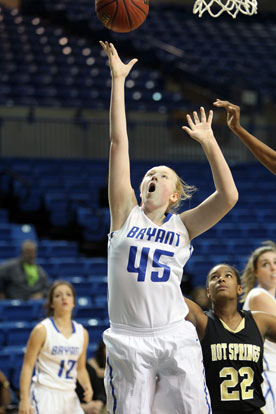 Rachel Miller gets a shot up as teammate Maddie Baxter (12) looks on. (Photo by Rick Nation)