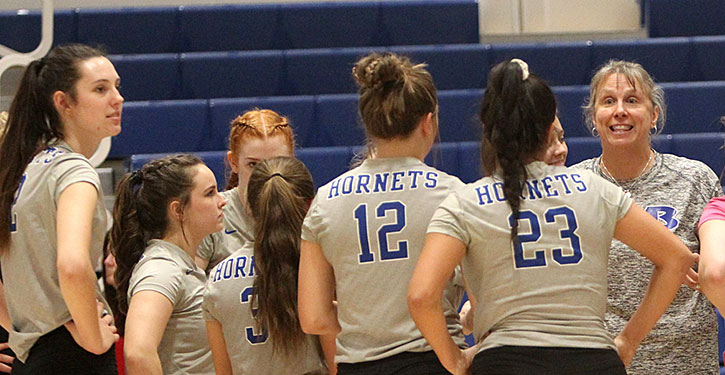 After the Bryant Lady Hornets performance at the Blue-White Showcase at Bryant Junior High last week, fans and parents were coming up to head coach Leigh Ann Back to tell her they were impressed.

“My husband and L.J. (assistant coach Lawrence Jefferson) and I were walking out and we were just mumbling and picking apart everything — ‘the girls didn’t do this, and the girls didn’t do that’. Then somebody else came and said, ‘They did great. The girls looked great.’ ‘Well, thank you so much.’

“And we’d keep going,” she continued. “We laughed when we got to the vehicles because it shows you our expectations, that they’re already so high.

“And the girls were mad. They weren’t happy with what they had done. The girls are expecting more of themselves. They realize that we’re not where we need to be yet. From the outside in, it did look good but we’re not there yet.”

So, Back and the Lady Hornets went back to work on Wednesday in preparation for a pre-season AAA benefit scrimmage at Benton, a jamboree with several teams involved. Each team playing a set against someone different.

And the work on Wednesday showed up on Thursday.

“We started off very strong, very well organized as a team,” Back recalled. “Our energy was great, rhythm was great. Then, when we matched up with Benton for the second round — I’m not for sure if it was because it was Benton or if it was because it was a little bit of a letdown from the first set. I’m not sure if it was, c, all of the above — but we kind of hit a panic moment there at the very beginning. We fought our way back a little bit, but we fought our way back late, way too late.

“Then the third set was the last that the varsity played, and it was — I think everybody was a little self-absorbed with the mistakes they were making, so we weren’t really playing as a team,” she related.

So, with renewed focus, the Lady Hornets have been working since then, getting set for their official 2019 debut at Hot Springs Lakeside on Tuesday.

After Thursday’s scrimmage, Back said, “What was really interesting was that there was a level of frustration that hit and, afterwards, I had to have a conversation with them about, ‘You guys have to understand, we’ve played against each other.’ ‘But, coach, we should be farther.’ ‘The season hasn’t even started yet.’

“So, they had to be taken aback for them to realize that it wasn’t deep into the season and we hadn’t gone anywhere yet,” she asserted.

“It reconfirmed a lot that we already knew,” Back assessed. “Coach Jefferson and I spoke a lot during the matches about the different things that we had seen might be a problem during practice. And they came to the surface.

“I think we’re still dealing with a lot with lack of confidence, not thinking like a belief in themselves, not thinking they can do what we’re asking them to do,” she explained. “So, when they get involved in it, if one thing doesn’t work out there’s kind of a panic moment then kind of chaos instead of calming down and playing through it.”

“We have 28 players on the roster, so I have a full sophomore, full JV and full varsity team,” Back acknowledged. “I have 10 sophomores, 12 juniors and six seniors. They are spread out every which direction, every level of experience, etc.

“The entire team has a lot of club experience, a lot of JO (Junior Olympics) ball,” she mentioned. “They come in from different clubs and different levels, so it’s been fun working with the terminology and the techniques that they’ve been taught in JO, for us to kind of combine everything, join it together.

“Anytime that you’re coaching a different level than, for example, the ninth graders coming in (as sophomores), they have a different process,” the coach continued. “But it’s been really fun.”

So, the team is not inexperienced, per se.

“I think it’s inexperience at what we’re asking them to do,” Back said.

And what is that?

“We’re asking them to play a lot faster than they’ve played in the past, speeding up our offense,” she answered. “We ended up matching up, when we played against Benton — Benton runs a very fast offense and our defense wasn’t very ready for it because our defense wasn’t playing very fast as well. We had some great moments, we had some teachable moments, and we had some really, really ugly moments. But I think it’s a good place to start and work through it.

“I’ve got some great leadership on the varsity with Truli Bates and with Erin Thompson, and I’ve got a couple of juniors that are stepping up with Madelyn Hoskins and Ella Reynolds,” Back asserted. “Samantha Ferguson is strong. We have a move-in from Central in Cassidy Land. Then we’ve just got a whole bunch of returners that are just very, very strong. It’s really fun to watch them work and get excited about playing at this new level.”

The varsity currently has an 11-player rotation.

“Cora Edwards and Shaylee Carver are my two setters,” said the coach. “Cassidy Land is playing on the right side. My outsides are Ella Reynolds and Madelyn Hoskins and my middles are Truli Bates and Sadie Jo Ferguson. I’ve got four DS’s. Erin Thompson playing libero then I have Kiarra Beard, Jaiyah Jackson and Sam Still.

“We’re getting a lot of people in, moving in and out,” she acknowledged. “It’s just getting everybody to figure out what their role is on the team and that’s a big deal.”

And Coach Back is confident that her team will get there.

“I think it’s just believing in the process and buying into the culture,” she said.

And that culture is?

Bryant makes its home debut on Thursday against Lake Hamilton.