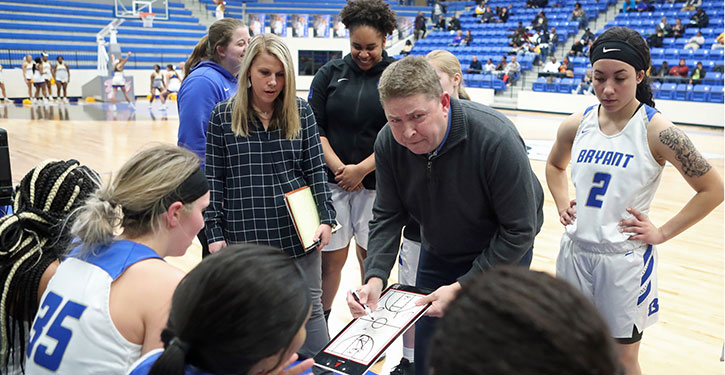 Before Tuesday night that is.

The Lady Hornets snapped a 23-game losing streak to North Little Rock stretching back to that date in 2005 with a 54-53 victory in overtime at Hornet Arena.

North Little Rock’s Destine Duckworth had to hit a basket at the buzzer of regulation to send the game to overtime. She then scored the first basket of the extra period to give her team a 52-50 lead.

But, against the Bryant defense, the Lady Cats managed just one point, on a free throw by April Edwards the rest of the game. So, when India Atkins buried a 3 with 3:15 left and Tierra Trotter added a free throw, the Lady Hornets had the winning edge.

It might’ve been more comfortable at the end, but Bryant converted just that one free throw in six tries in the final two minutes of the overtime.

But they held on to give head coach Brad Matthews his first win over friend and rival Daryl Fimple and his Lady Cats since being hired at BHS before the 2011-12 season.

At that point, Matthews inherited a 10-game losing streak for the Lady Hornets against North Little Rock.

“Our kids played so hard,” the coach stated. “It was a great atmosphere, great arena, great crowd. It was so loud in here. Our kids really responded. They fought their guts out.

“North Little Rock’s so big and so athletic and so talented, well-coached,” Matthews noted. “You know you’re going to give up some stuff, but you’ve just got to make them work for everything they get. To our kids’ credit, we just kept fighting and fighting, and we made enough plays to win, to beat a really good team.”

Trotter and Atkins each had 17 points in the game. Parris Atkins added 7 and Lexie Taylor 6, off the bench. But it was that defense that made the difference. The Lady Hornets had to work in their zone with backside support to keep North Little Rock’s 6-3 post Amauri Williams to 14 points and 16 rebounds. Duckworth finished with 18.

But take away the shooting of those two and the rest of the Lady Cats combined to converted 6 of 44 shots from the field. That’s 14 percent shooting.

It didn’t look like it would go that way at the start. The Lady Cats pushed out to a 6-0 lead. Matthews called a timeout with 3:59 left in the period. At that point, the Lady Cats had converted 3 of 9 shots from the field while the Lady Hornets had missed all nine of their attempts.

But the timeout helped. Off an offensive rebound by McKenzie Muse, Celena Martin drove for a layup to get the Lady Hornets on the board.

Still, it was 11-4 going into the final two minutes of the quarter. Muse cut into that with a 3, Trotter added two free throws and, with :13 left, Taylor buried her first triple.

Suddenly, the Lady Hornets had a lead, 12-11, going into the second quarter.

North Little Rock scored the first 4 points of the second quarter to regain the upper hand. But a 3 by India Atkins tied it and, off a turnover, Trotter buried a trey to put the Lady Hornets back on top.

After a North Little Rock timeout, Parris Atkins added a free throw and, moments later, drove for a layup to give the Lady Hornets a 21-15 lead.

Two free throws by Edwards started the third-quarter scoring but Parris Atkins made a steal that led to a layup for Trotter then India Atkins added a free throw.

Sparked by a three-point play from Williams, the Lady Cats surged back into the lead. With 2:34 left, Bryant trailed 31-30.

A 3 by Taylor put the Lady Hornets ahead again and, off a steal, India Atkins hit a layup.

Back came North Little Rock, however. They forged a 37-35 lead before Trotter hit a layup with :02.5 showing to make it even going into the fourth period.

The game was tied at 41 and 43. India Atkins hit a free throw then, after both teams had missed opportunities, Parris Atkins drove the floor for a layup that had the Lady Hornets up 46-43.

The Lady Cats rallied to tie at 48 before, with 1:07 left, Trotter converted twice at the line. It stayed that way until North Little Rock had the ball and a timeout with :08.2 showing.

When play resumed, Arin Freeman and Williams each missed inside before Duckworth got the second offensive rebound of the possession and scored at the buzzer to send it to overtime.

“We didn’t get our heads down,” Matthews said, regarding the tying basket at the end of regulation. “We could’ve folded then. We had the game and we gave up an offensive rebound to tie it. But we didn’t. We kept fighting.”

The win helps salve the wound of a tough loss at Cabot on Friday night. The Lady Hornets pulled even with Cabot in the standings with Tuesday’s win at 4-2 in conference, trailing only Fort Smith Northside and Conway.

“I’m really happy for our kids after Friday night didn’t go as well as we hoped,” acknowledged Matthews. “This is really a big bounce-back win for us. For our kids to get the joy of winning — a lot of work, a lot of time goes into this — in front of this home crowd, to get the joy of that, it’s good to see.”

The Lady Hornets travel to Conway this Friday.

January 29 in Bryant athletic history: 1999
Conway gets 46 in the first half on the way past Lady Hornets 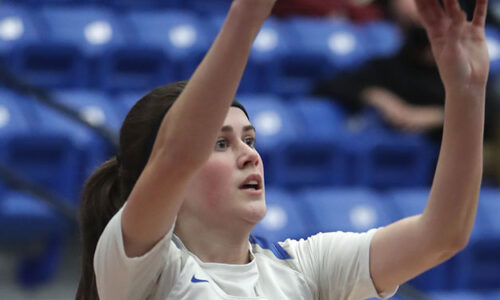