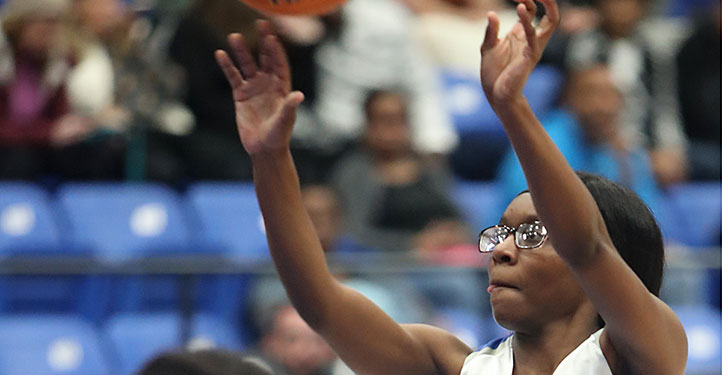 Senior point guard Tierra Trotter scored half of her game-high 28 points in the fourth quarter on Friday night and the Bryant Lady Hornets’ defense forced 21 turnovers including three big steals in the final minute as they surged past the Cabot Lady Panthers on the way to a 48-44 upset victory.

It was just Cabot’s fourth loss in 25 games this season.

The Lady Hornets had suffered 61-42 and 57-44 losses to the Lady Panthers earlier this season. Shy Christopher, who led her team to those victories, scored 21 points on Friday. Hannah Ogilvie had 10 and Kaitlyn Theobald 9.

To go with Trotter’s 28, McKenzie Muse had 11 including three 3-pointers.

“I thought if we could make them play in the half court,” said Lady Hornets coach Brad Matthews. “Christopher is so good in space. She still had spurts in space tonight but once we could get them in the half court — I felt (Bryant assistant) Coach (Joanna) Scott did a great job of preparing our kids and our kids executed really well, competed on the boards. We give up so much size night in and night out. But I thought, especially there at the end when we made our run, we were getting some rebounds and getting out in transition.

“They’re so good,” he added. “They’ve got three college kids over there and Theobald is a great shooter. She’s worn us out this year the three times we’ve played them.”

The win came for the Lady Hornets despite scoring just 2 points in the third quarter. Cabot went on a spree and turned a 25-19 deficit at halftime into a 38-27 lead going into the fourth quarters.

“We could’ve easily dropped our head when we went from up 5 to down 11,” Matthews said. “But we didn’t. We found a way to fight back on both ends of the floor.

“We were really good away from the ball, reading eyes, being active and moving while the ball’s in the air,” he continued. “When you do that enough, good things are going happen.”

Christopher, as usual, attacked the basket but the Lady Hornets did a good job, particularly in the fourth quarter, of helping on defense to cut her drives off and forcing her to try to pass to a teammate. Support on the backside led to a steal by Parris Atkins and another by India Atkins.

“That’s what we didn’t do the first couple of times,” said Matthews. “She had 36 on Conway. She had 30-something on North Little Rock. She can go by people. You can’t guard her with one person. We worked on it the last two days and the kids did a really good job of executing what we did in practice.”

Muse’s 3’s, all in the first half, loosened Cabot’s defense on Trotter who was able to use her quickness to drive to the basket.

“McKenzie got some open 3’s early because they were hedging off Tierra,” Matthews explained. “We did a good job of getting it back to McKenzie so she could knock down some 3’s Her ability to hit those 3’s, it looked like they were guarding Tierra a little bit differently, staying closer to McKenzie. Tierra was able to get into the lane. She was really good there in the fourth quarter.”

Trotter hit a 3 to start the fourth quarter and the comeback. Cabot turned the ball over, and Parris Atkins wound up at the free-throw line where she converted once. Cabot’s Izzy Arnold missed a running bank shot and Trotter got into the teeth of the Lady Panthers’ zone for a layup that whittled the lead to 38-33.

Ogilvie hit a 12-footer, but Ivory Russ answered with a baseline jumper. Cabot turned the ball over, and Trotter drove for a basket. She was fouled but was unable to complete the three-point play. Still, the Lady Hornets were suddenly only 3 down.

Both teams missed shots before Trotter pushed the ball up the floor and scored with 3:15 left in the game. She was fouled but missed her free throw. Parris Atkins rebounded but the Lady Hornets couldn’t take advantage right away.

Off a miss by Ogilvie, Trotter was off and running. She took a feed from her younger sister and scored to give Bryant a 41-40 lead.

Emily Bellin hit the offensive glass for a basket, giving Cabot the lead again with 1:55 left.

Another driving jumper by Trotter returned the lead to Bryant.

Parris Atkins made a steal off Christopher’s drive and dish and was fouled with :32.3 remaining. She converted one of the free throws to make it 45-42.

At the other end, Christopher drove the left side, was met with good help-side defense and tried to whip a pass to a teammate on the other side of the lane. But Parris Atkins stole the ball and drove for a game-clinching layup.

“Tierra obviously had an awesome game there to get us to the finish line, but it was a good team win,” Matthews said. “I’m really happy for our kids to get a win. It’s another great home win for us. We’re playing pretty good here. Looking forward to about a week and half from now.”

That’s when the 6A State Tournament will be held at Hornet Arena.

Cabot had rushed to a 10-3 lead in the early stages of the game. Trotter got the Lady Hornets on track with a 3. A driving bucket from Celena Martin closed the gap further. Trotter made it 10-9 at the free-throw line. When Ogilvie missed, the Lady Hornets pushed the ball the other way and Trotter hit a running jumper that put Bryant ahead 11-10.

Christopher hit a layup to put the Lady Panthers back on top going into the second quarter.

It was 16-11 when a basket by Trotter then a 3 by Muse tied the game. Christopher untied it with a 3.

It was 19-17 when Trotter made a steal. But a missed shot led to another one as Celena Martin got it to Muse for an 18-foot jumper, tying it at 19.

Trotter’s steal and layup became a three-point play. Off another turnover, Muse buried a 3 to make it 25-19 going into halftime.

But the Lady Hornets managed just two free throws from Trotter in the third quarter. Cabot pushed ahead 29-25 before Trotter’s free throws.

That’s when Theobald heated up with consecutive 3-pointers. Add in a three-point play by Christopher on a drive to the hoop and it was an 11-point lead going into the fourth.