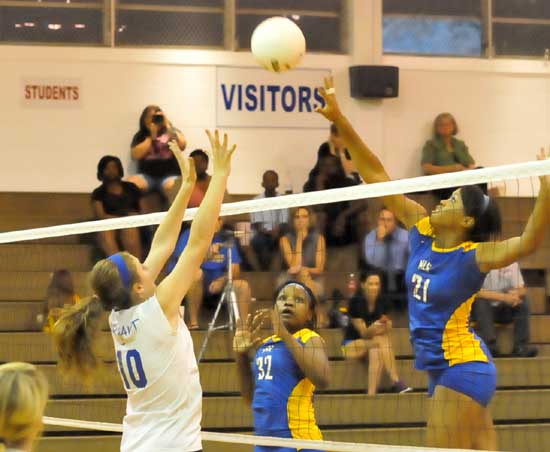 With a 3-1 win over the North Little Rock Lady Charging Wildcats, the Bryant Lady Hornets pulled into a[more] tie for second place in the 7A/6A-Central Conference volleyball standings on Thursday night. 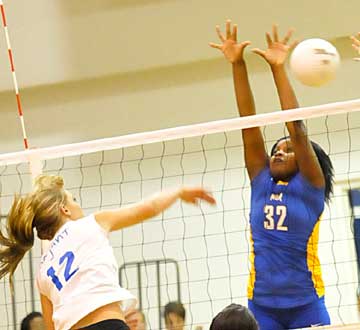 Bryant came back after dropping the first game of the match 22-25 with three straight, 25-21, 25-19, 25-18 over North Little Rock which came into the week unbeaten in league play. Thursday’s loss for the Lady Cats comes on the heels of a loss to league-leading Conway on Tuesday.

The Lady Hornets, 6-3 overall, finish the first half of the conference round-robin schedule 5-2. They travel to Little Rock Central on Tuesday to start the second go-‘round.

“We needed the win tonight,” stated Lady Hornets coach Beth Solomon. “The girls played great. We had a rough start during game 1 but pulled it out in games 2, 3, and 4. In game 3, we actually held the lead the entire game. 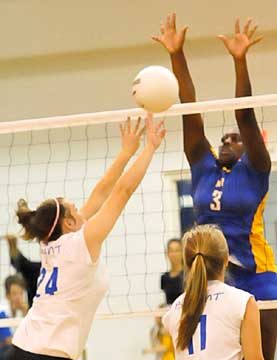 “Our Conway-Van Buren-NLR stretch during conference play is always our toughest part of season,” she added, referring to the team’s three most recent matches. “We’ve pulled out wins in two of the three hardest games we’ve had so far.”

Solomon said of her team’s place in the standings going into the second half of the league season, “That’s something that I can say Bryant hasn’t done in at least the seven years I’ve been here, possibly more.”

McKenzie Rice continued to shine at the net for the Lady Hornets with 18 kills. Brooke Howell came through with 14 and Brianna White had seven. White was also tough on the Lady Cats with three solo blocks and assists on two others. Alyssa Anderson had three assists on blocks, Peyton Thacker two.

“Brooke Howell had a great game tonight,” Solomon stated. “She started off the season as one of our most consistent hitters and has kind of gone through a lull. She’s coming out of it. 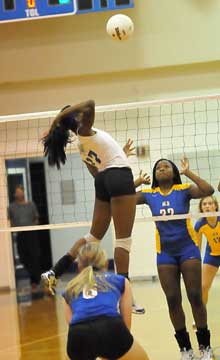 “McKenzie Rice also had a great game tonight,” she continued. “We went to our outside hitters a lot tonight, and they’re becoming smarter players. They’re placing the ball instead of just firing away at it every time.”

Hannah Rice had 11 good passes without an error to go with 13 digs. Howell had 12 digs and Taylor West six.

“Lauren Reed has had an outstanding week this week,” Solomon praised. “She had another great game tonight.

“We’re getting more and more consistent with each game,” the coach concluded. “We’ve told the girls, we’ve got to go up, not plateau; we’ll peak at the State tournament.”