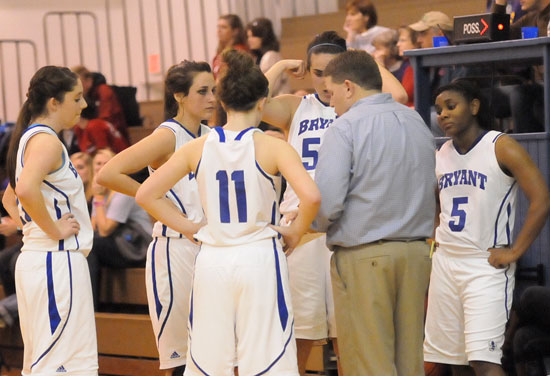 After having a shot at breaking a 49-49 tie in the final minute of regulation, Bryant Lady Hornets'[more] sophomore Dezerea Duckworth came up with a steal and a free throw in overtime that put her team ahead to stay in a 56-54 victory over the Mount St. Mary Belles on Friday night. 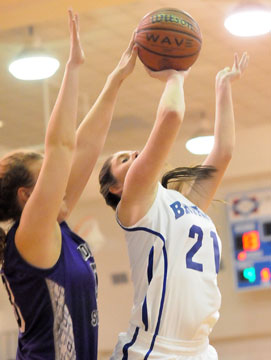 It was the 7A/6A-Central Conference opener for both teams.

Kiara Moore, who had to sit for much of the second half in foul trouble, converted four free throws in the last 20 seconds of the extra period to provide the necessary cushion for the Lady Hornets. She finished with 14 points and Taneasha Rhode, also plagued by foul trouble, added 10.

Because of their foul trouble, Bryant needed a lift and junior Courtney Davidson came through with 14 points and 11 rebounds. Duckworth finished with 9 points. Whitney Meyer and Logan Davis had 4 each with Meyer contributing eight boards and, defensively, helping to keep Mount’s post duo of Mallory Kleine and Nikki Sanders to just 2 and 5 points respectively.

“Courtney’s been playing really well,” noted Lady Hornets head coach Brad Matthews. “Sometimes it doesn’t show up in her scoring but her defense and rebounding are getting a little bit better every game. Tonight, she was able to give us a spark with her offense off the bench. It was by far her best game of the year, not just because she scored but I thought she defended and gave us some toughness inside that we needed. 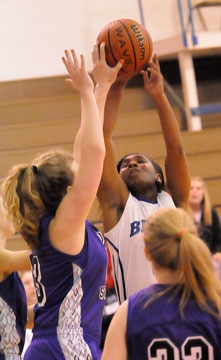 “She’s got some ability and I think as we continue through the conference season, she’s somebody we’re going to need to depend on,” he added.

“Whitney’s come a long way since the start of the year,” the coach mentioned. “I thought, defensively, she did a good job in the post tonight.”

Bryant led the game for all but a few seconds but just couldn’t put the Belles away thanks in large part to a 24-point performance by senior Summer Khairi.

“I thought our defense was okay tonight,” he added. “We’ve just got to be able to finish defensive possessions with rebounds. Tonight, we just didn’t do a very good job of that in spurts. That’s just something we’ll go back and work on every day and we’ll keep on trying to improve on.”

Though the Lady Hornets held a 43-41 edge on the boards, 17 of the Belles’ caroms came on the offensive end.

“We’ve got to continue to work to try to find our consistency,” Matthews concluded. “I think that’s one thing that we lack. When we play well, we’re okay. We’ve just got to work on our consistency. Like our rebounding, it’s not just one or two kids, it’s our consistency as a group.” 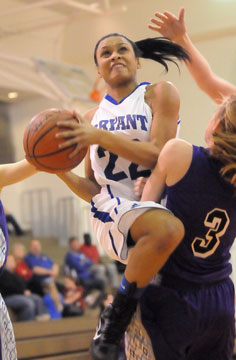 Bryant’s largest lead of the game was 7 points, briefly in the first half and then again for a possession in the second half. The Belles never led by more than 2.

The game was tied 6-6 when Davidson grabbed an offensive rebound and was fouled. She converted twice to snap the tie.

At the other end Rhode made one of her three blocks in the game and Moore wound up at the line where she converted once. The Lady Hornets forced a turnover and Moore capped the quarter with a drive to the rack and a three-point play to make it 12-6.

Mount trimmed the margin to 13-11 but a basket inside by Meyer and, moments later, a free throw after she grabbed the carom off a miss by the Belles’ Emma Kauffman pushed it back to 6.

When it was 18-15, Mount had a chance to trim it to 1 or get even with a 3 only to have Duckworth force a five-second closely-guarded call. Davidson cashed in the turnover with a 3 and when sophomore Aubree Allen hit a free throw after grabbing an offensive rebound, the Lady Hornets had their first 7-point edge, 22-15, with 2:02 left in the half.

The Belles, however, closed with a flurry. Kauffman hit two free throws, Khairi banked in a 3-pointer then a layup by Ellie Bilger tied it. Bryant turned the ball over with :09.6 showing and Khairi hit a running jumper with :03 showing to give her team at 24-22 halftime edge. 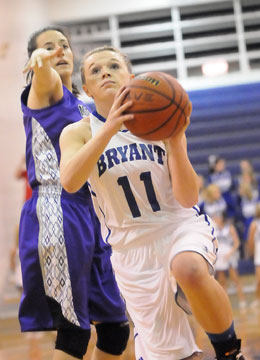 Rhode’s stickback tied it to start the second half. She then made a steal that led to a go-ahead free throw by Moore. Sanders answered for Mount, giving her team a 26-25 edge but when Duckworth drove for a layup and Davis hit two free throws, the Lady Hornets never trailed the rest of the night.

But the game would be tied five times after that even though the Lady Hornets managed to get the lead to 7 again before the third quarter concluded. Duckworth snapped a 29-29 tie with a 3 then Moore hit a driving jump shot. A 3 by Mount’s Gracie Sloan trimmed it to 2 again but Rhode scored off an inbounds play and, after Moore picked up her fourth foul and had to come to the sideline, Davidson snagged an offensive rebound, scored and was fouled. Her free throw made i4t 39-32 with :50 left in the period.

In the final seconds, however, Khairi scored and the Belles gradually came back eventually tying it at 44 on a basket by Sanders with 3:16 left to play.

In turn, however, Duckworth started a drive and kicked the ball out to the right corner to Davidson who buried a clutch 3-pointer.

Again, the Belles pulled even at 47 and had a chance to take the lead only to have Moore make a steal and feed Davis for a layup which had the Lady Hornets up 49-47 with 1:46 to go.

Kleine would tie it at the free-throw line with 1:14 left in regulation. After a Bryant miss, the Belles spread the floor and worked the clock down to :07.8 before calling a timeout to set up a chance for a game-winner. As it turned out, they had to use two more timeouts just to get the ball inbounds with :03.9 to go and when Kleine got a shot off at the buzzer, it missed and overtime ensued.

Rhode gave Bryant the initial lead but Khairi tied it. Rhode missed at the other end and Mount spread the floor, working the clock inside a minute before Duckworth came up with the steal that led to the tie-breaking free throw with :32.3 showing.

The Belles’ Olivia Iriana misfired on a 3-point try, Davis rebounded and Moore was fouled with :16.8 to go. Her free throws made it 54-51, still a one-possession game.

With :12 left, Mount’s Kaitlyn Stuff was fouled. She converted a free throw to cut it to 54-52 but when Moore came through with a pair at the line at the :10.1 mark, the game was out of reach.

Now 9-6 overall, the Lady Hornets travel to Van Buren on Tuesday, Jan. 10, for another league contest.