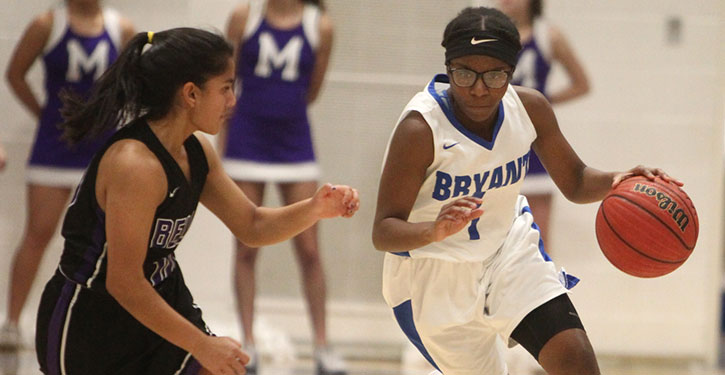 The Bryant Lady Hornets didn’t have their best night at the free-throw line on Tuesday but they made just enough including clutch shots by Ivory Russ and Kalia Walker in the final five seconds to hold off a furious rally by the Mount St. Mary Belles.

The Lady Hornets held on for a 43-39 victory, their first in 7A-Central Conference play, after leading by 10 with just 2:47 left to play. The Belles whittled that margin down to a point but could never get the lead as Bryant extracted the win.

“We clean up our free throws there and it’s probably a little bit more comfortable at the end,” acknowledged Lady Hornet coach Brad Matthews. “But the kids are trying. I think there was a lot of good stuff going on out there tonight. We’ve just got to clean up the little stuff.

“It was kind of like the end of the Blytheville game,” he added, referring to a 42-38 win at the Beebe Holiday Classic on Dec. 30. “We found a way. When you go 14 of 34 from the free-throw line, most of the time you do that you don’t win. So, we were fortunate. But this time of year, it’s about trying to find a way to win in conference. We’re 1-1 now.”

Though they struggled at the line, the Lady Hornets earned all 34 of those free-throw attempts by attacking the basket rather than settling for jump shots. Walker finished with 12 points and the only 3 of the game, ending the third quarter and giving her team a 10-point margin. Robyn Gordon came off the bench to add 10 points and 10 rebounds including seven on the offensive end.

Celena Martin had 8 points and five boards and MeKeycia Baker came off the bench for 5 points, two rebounds and two blocked shots. Ivory Russ, in foul trouble much of the game, scored 3 points but gathered in nine boards. India Atkins scored 4 points and Tierra Trotter, despite scoring just one free throw, handled Mount’s second-half press well and distributed the ball as the Lady Hornets pushed the ball. 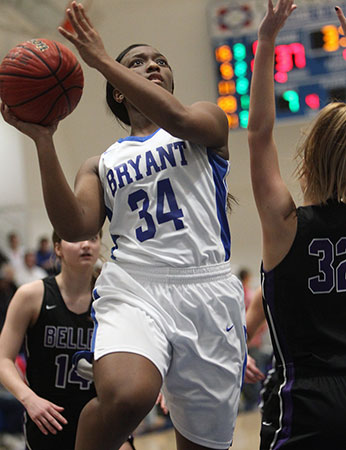 Ivory Russ goes up to finish off a drive. (Photo by Rick Nation)

“That’s when we play well,” Matthews asserted. “This group plays better when they’re attacking and able to get up and down in a flow. We’re trying to learn to do that with discipline. Sometimes it’s there, sometimes it’s not. I think we’re getting there more and more. In order to play fast, you’ve got to play with discipline and on balance. Sometimes we don’t finish on balance.

“But, obviously, we’re playing a lot of kids without experience,” he noted. “You can work on that all day in practice but the refs are here, the band is here, the crowd’s here. It’s a totally different environment, so you’ve got to kind of learn as you go, learn to make plays and finish down the stretch.”

The Lady Hornets out-rebounded the Belles 39-35, another key point for Matthews.

“I thought our kids competed,” he stated. “Celena Martin is doing a good job on the boards for us. Robyn had one of her better nights of the year so far. Kalia stepped up and made some big free throws there at the end. There was a lot of good stuff.”

Regarding the defense, the coach said, “We’re getting there. We’ve still got to rebound. We don’t have one kid that we can rely on to go get it. Our guards have got to do a better job rebounding. I thought Celena, Ivory and Robyn are getting better and better at going to get the ball. We’re trying to play zone and it’s always more difficult to rebound out of zone.”

Bryant led most of the way. Mount’s last lead was 8-7 with 3:19 left in the first quarter. Free throws by Walker and Martin got Bryant back out front. A layup by Martin off a nice feed from Trotter made it 12-8 going into the second stanza.

Atkins fed Gordon for her first basket at the start of the second. Trotter made a steal and Gordon, grabbing an offensive rebound, scored and was fouled. Though she missed the free throw, Martin grabbed the carom. Though her shot wouldn’t go, Gordon rebounded and was fouled again. She made one to make it 17-8.

After Mabry Meadors broke the Belles’ drought, Baker came in and was fouled. She converted twice to stretch it to 19-10. Gordon’s short jumper increased the margin to 11 for the first time. It would be the largest Bryant lead, a margin they would reproduce early in the fourth quarter.

Meadors got Mount’s first field goal of the second quarter with 3:13 left and it started a rally for the Belles. Walker answered but then Bryant didn’t score again over the final three minutes of the half. That enabled Mount to trim the margin to 23-18.

The teams traded baskets early in the third quarter with Martin getting a stickback and Baker scoring off a nice dish from Walker. But the Belles cut the lead to 4 with 5:04 left in the quarter. A Bryant miss and they had a chance to get closer only to have Atkins take a charge on a drive by Mount’s Lona Ceccherini.

Though Martin was fouled and missed twice at the line, Trotter made a steal and fed Atkins for a layup and a 29-23 edge. Atkins then made a steal Trotter was fouled at 2:52. Though she missed both shots, Baker rebounded and was fouled. At the line, she converted once to make it 30-23.

A flurry of turnovers followed. Baker blocked a shot and, with 1:10, the Belles called a timeout. The Belles held for a last shot but missed a 3-point try and left too much time on the clock. Walker rushed the ball up the floor and hit a shot from 35 or 40 feet out to make it 33-23.

And when she hit a free throw in the opening moments of the fourth quarter, there was that 11-point advantage again.

Baskets by Gordon and Russ helped the Lady Hornets maintain the advantage. A basket by Atkins as she was fouled with 2:47 left, made it 39-29.

The Belles jumped into a trapping press and Bryant was able to get to the free-throw line but their struggles led to the shrinking lead. Mount was parked by Natalie Snook who scored 8 of her team-high 13 points in the quarter.

With the lead down to 40-34, the Lady Hornets missed a pair at the line but Atkins stepped up defensively to take her third charge of the game.

But Bryant missed a shot inside and Mount’s Anya Ranaraja hit a pair of free throws. The Belles forced a turnover and Snook hit a layup with:25 left. With the lead down to 40-38, Matthews took a timeout with :23.7 showing.

Again the Lady Hornets got to the line when play resumed and again they came up empty. With :10.5 to go, Sarah Sagar went to the line with a chance to tie it. But she too missed both free throws.

With :07.7 left, Russ hit a free throw but it was still a one-possession lead. Her second shot was rebounded by Martin. She got it to Walker who was fouled with :01.9 left. She dropped in both charity tosses to secure the victory.

The Lady Hornets return to league play at Little Rock Central this Friday. 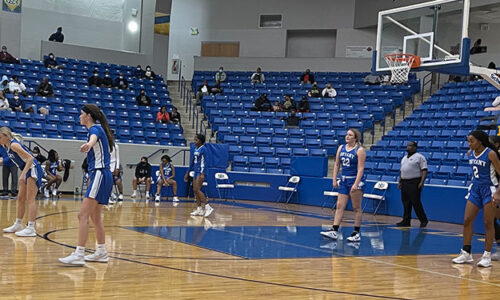