Lady Hornets volleyball team gears up for season at jamboree 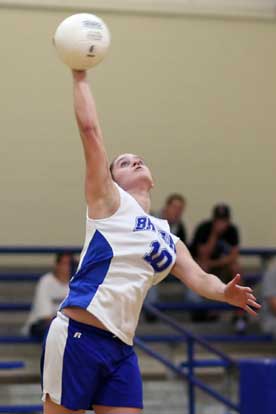 BENTON — The Bryant Lady Hornets volleyball team got its first taste of competition this fall under new head coach Beth Solomon on Thursday at a pre-season jamboree held at Benton High School.

"We played well but we didn't play as well as I think we should have," Solomon commented. "For the season opener, I think it was okay. The main thing was just to get the girls out and play before we open the season next week against Lake Hamilton."

Bryant visits the Lady Wolves on Thursday, Aug. 27, with a JV game starting at 5 p.m., followed by a varsity match. [more]

"We've got some pretty good hopes for this season," stated Solomon who is being assisted by Julie Long. "We're going to pull out some tough ones, I think. The girls are working harder than they ever have."

The team was without sophomore Lauren Reed, one of three sophomores that Solomon said are in the mix for starting assignments (along with Maggie Hart and Brianna White).

"I'm excited that we beat Mount," noted the coach. "At the Hendrix camp a couple of weeks ago, we beat North Little Rock. So it's a good sign that we're beating conference teams."

"I think our setters really stepped it up, Jordan Armstrong and Kasey Baker," mentioned the coach. "We have some good leadership from them and that's going to be really important. And those sophomores, who'll probably start are encouraging, not just for this year but for years to come.

"Kayla Davidson did a pretty good job serving," she continued. "She was our best server last night. She had eight aces. Our hitters were kind of off. They didn't really hit as well as I'd like for them to."

Ask what will be taken from the outing onto the practice court, Solomon answered, "We'll be working a lot more as far as defensive coverage. And they're still coming together as a team and that's something that they'll get. They've been getting better since we went to camp this summer. And I expect that continue."