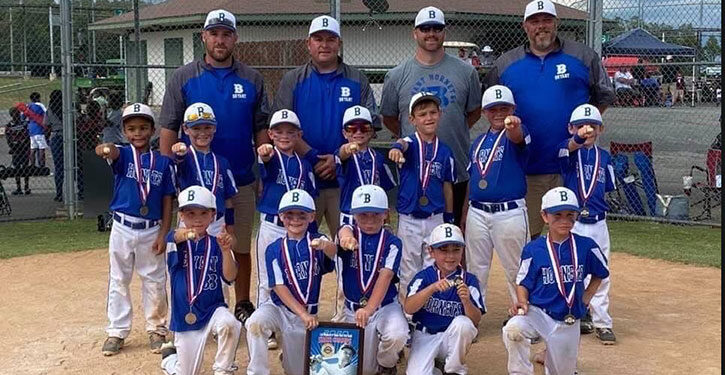 SHERWOOD — In a seesaw battle, the Bryant Cal Ripken All-Stars got the last chance to score on Sunday night. And they took advantage with a six-run uprising that produced a thrilling 16-15 win over rival Benton in the championship game of the 6U State Tournament.

Each team scored three runs in the first then each was kept from scoring in the second.

For Bryant, Nichols, Gaston and Tanner scored in the first.

In the third, Benton pushed six runs home in the top of the inning to take a 9-3 lead only to have Bryant answer with six in the bottom of the inning.

Nichols, Fennel, Tanner, Hartzell and Smith each crossed the plate.

And Bryant held Benton to just one run in the top of the fourth. In turn, Bryant scratched out two runs to regain the lead 11-10. Meador and Verdell scored the Bryant runs.

Benton came back with five in the top of the fifth, building a 15-11 lead. But Bryant would not be denied in the home half. Smith wound up with the game-winning RBI after Fennel, Gaston, Tanner and Hartzell had scored. Smith’s double brought in Jordan for the walk-off win.