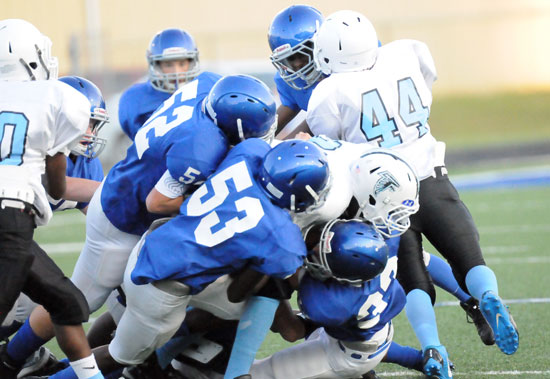 Tristan Calhoun, James Polite and Isaiah Ash each scored a touchdown and the Bryant White Hornets eighth grade team of Bryant Middle School held the Little Rock Henderson Hawks scoreless until the final minutes of the game Tuesday night. The result was a 22-8 win for the Hornets who improved to 3-1 on the season going into a trip to Horace Mann in Little Rock on Tuesday, Oct. 8. 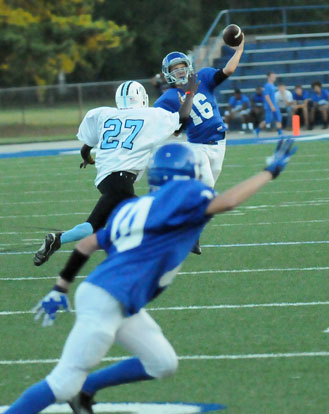 Before the 50-yard scoring drive by the Hawks, the Bryant White defense held them to a net of just 47 yards of offense.

“I thought that we played good enough to win but didn’t play our best game,” commented Hornets coach Brad Smothermon. “I just want these boys to understand we have to be focused and play hard all the time. I felt like we finally got it going at the end of the first half and in the second half.

“I thought that our defense played really good in shutting them out for most of the game until late,” he added. “Sometimes the defense has to play better than the offense and I think that is more of what happened last night.  The defense gave the offense time to get in the groove and get it going.”

Henderson’s best drive before that last one was its first one as they drove from the Bryant 45 after a strong kickoff return to the 23. But the Hawks, who suffered 10 penalties for 73 yards, were pushed back by a procedure penalty and, a play later, fumbled. Bryant White’s Johnny Wallace recovered.

The Hornets drove to the Henderson 42 before stalling. Henderson took over on downs but couldn’t manage a first down. A.J. Todd made a stop for no gain for the Hornets then, on third down, Wallace dropped quarterback Bobby Brown for a five-yard loss to force a punt.

The Hawks got a break, however, when the punt was mishandled. Henderson’s Christopher Patton recovered at the Bryant 49. A couple of runs by Tyrese Norah reached the 30 and, after another procedure penalty, running back Trevon McCullough was separated from the ball and Wallace pounced on it again.

With 3:09 left in the half, the Hornets embarked on the first scoring march of the game. Calhoun completed a 14-yard pass to Aaron Griffin to get it started. Later he threw to Keshaun Davis, who did a good job of coming back to the ball for the catch as Calhoun scrambled to keep the play alive.

After Calhoun kept for 6 yards on consecutive plays to produce a first down at the 29, a pass interference penalty, which prevented a touchdown, pushed the ball to the 16. A play later, Polite sprinted up the middle for his 14-yard touchdown with 0:16 showing on the clock.

Calhoun passed to Brooks Ellis for the two-point conversion and it was 8-0 at the half.

The Hornets followed up with a scoring drive to open the second half. Calhoun and Griffin teamed up for completions of 15 and 8 yards then the quarterback sprinted 39 yards down the left sideline for the touchdown. Calhoun also kept for the conversion and it was 16-0. 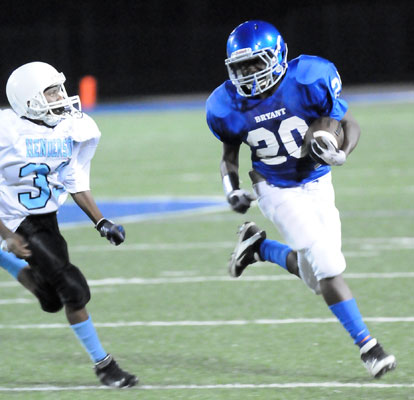 After Henderson went three and out, the Hornets got the ball back at midfield but stalled at the 39. The Hawks took over on downs but stops by Nick Smith, Grayson Prince and Bryce Thomas on consecutive plays forced a fourth down. Brown’s pass fell incomplete and the Hornets had the ball back 42 yards from paydirt.

Bryant White coach Brad Smothermon began working in his reserves at that point and they nearly forced another Henderson turnover but the Hawks’ Deitrick Brown fell on the loose ball to keep the drive going. Norah eventually scored from the 4. He also added a run for a two-point conversion.

The Hawks attempted an onside kick but the Hornets’ Scott Schmidt covered it and Bryant White ate up the rest of the clock.