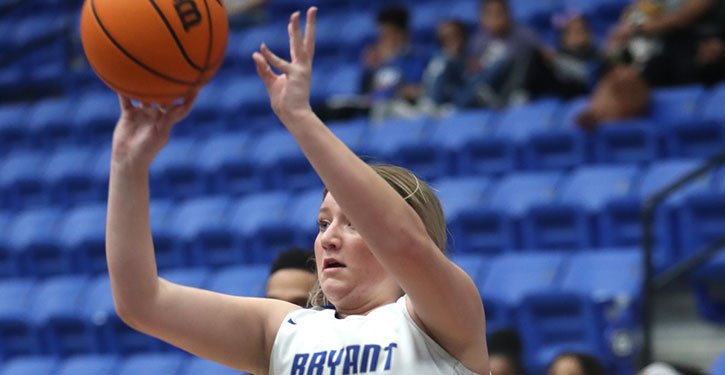 One of these days — and it could be next week in the Class 6A State Tournament in Fayetteville — all four of the Bryant Lady Hornets’ outside shooters are going to be hot in the same game. And pity their opponent.

It hasn’t happened yet this season but each has had a game when they’ve hit three or four or five or even six 3-pointers in a game but not all of them at the same time.

It didn’t happen Thursday night either, as they wrapped up the regular season in a showdown with the Little Rock Central Lady Tigers for the fourth seed from the 6A-Central Conference to State.

Though they Lady Hornets managed to fire 19 3’s, they almost always seemed to be contested by the taller Lady Tigers. Bryant hit four of their first nine triples, all in the first half, which ended with them leading 32-29.

But Central made it tougher in the second half and the Lady Hornets missed all 10 of their tries. Still, the game was tied at 41 going into the final minute of the third quarter. Central’s Bryunna Stuckey hit a 3 to give Central a 44-41 lead going into the final period.

The Lady Hornets then missed their first 11 shot attempts in the fourth quarter. Their defense helped keep it close. When Brilynn Findley hit a pull-up jumper with 3:29 left to play, snapping Bryant’s cold streak, they were still within 47-43.

But Central closed out the game with an 11-4 run sparked by 5’11” freshman Jordan Marshall, who scored 7 of her game-high 23 points during that run that produced a 58-47 win for the Lady Tigers.

They will be the 4 seed for State and will play on Wednesday, March 10 at 10 a.m. As a 5 seed, the Lady Hornets will play the very first game of the tournament on Tuesday, March 9, at 10 a.m.

The game ended a week in which the Lady Hornets crammed in five games. They won four of them to earn their trip to State and get a shot at the 4 seed but couldn’t hang on against Central.

“It was fun,” said Lady Hornets head coach Brad Matthews. “But we’re tired, no doubt. But, hey, we’re playing basketball. It’s a good thing. This is what we love. We love basketball and it was a good run. It was a long run but a good one.

“Tonight, Central’s good,” he added. “They’re very long. They’re athletic. I thought we handled their zone. They get out wide and we handled it, for the most part, pretty well. We had a few turnovers but that’s going to happen when you’re giving up 3 of 4 inches at spots. They have big, long wingspans and make the passing lanes different than a lot of nights we play.

“But for three quarters there, we were right there and, with three minutes to go, we have a chance to win. This time of year, it’s about finding a way. It’s not always pretty. We found a way to win on Tuesday (against Little Rock Southwest). To Central’s credit, they made more plays in the last two-and-half minutes that we did.”

The big shot was a 3 by Marshall just after Findley had pulled the Lady Hornets within 4.

“To their credit, they made that big 3 when it was a 4-point game and, after that, we never could get any closer,” he reiterated. “It’s about making plays, especially at this time of year, and our kids will learn that. When you’ve got a chance to win, you’ve got to find a way to get it done.”

The game was the final home game for the Lady Hornets’ lone senior, Lauryn Taylor, who scored 2 points and had seven rebounds.

Junior Parris Atkins scored 17 with nine boards. Findley finished with 13, 11 of which came in the first half.

“The first half, I think we got a lot of good looks,” Matthews mentioned. “The third quarter, we got some good looks because they spread out. We got the ball in the middle of the lane and I think we had one bucket in the first five or six possessions.”

That was a driving jumper by Atkins that had the Lady Hornets ahead 34-31. Before Bryant could score again, Central surged to a 38-34 edge.

The Lady Hornets battled back to tie it. Atkins hit a free throw then scored off an offensive rebound. After a layup by Marshall, Emileigh Muse took a feed from Findley for a layup. Atkins scored and was fouled with 1:54 left in the third. She missed the free throw, which turned out to be the third and final free throw of the game for Bryant.

The officials let them play, calling just 15 fouls, only six on the Lady Tigers.

Bryant got out fast to start the game. Atkins made two steals that resulted in layups for herself and Lauren Lain.

Lauryn Pendleton drove for a basket then Lillian Jackson tied it off the offensive boards.

But Findley popped the first of her three 3’s in the half.

The lead seesawed in the first quarter until Atkins went coast to coast off a lone defensive rebound in the closing seconds to give Bryant a 17-16 lead.

Central managed a 4-point lead and held a 29-25 advantage going into the last 2:58 of the half. Taylor assisted on a Findley 3 to cut it to 1 and, after Marshall missed twice at the free-throw line, the game went back-and-forth until Taylor scored off the offensive boards then Natalie Edmonson made a steal and layup to give Bryant a 32-29 lead after one of their better halves of basketball this season.