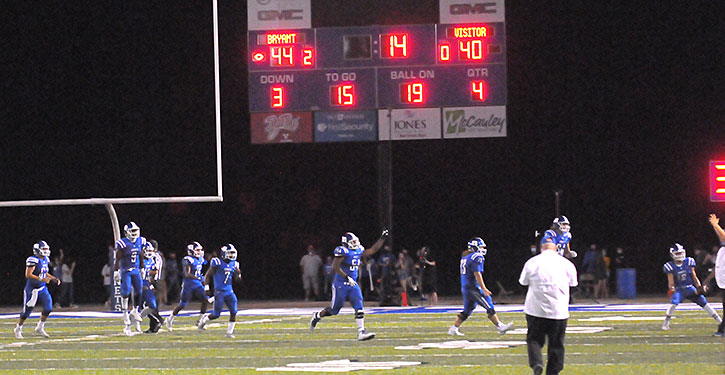 For more photos from this event by Kevin Nagle, go here; photos also by Andrew Schroeder

“I knew it’d be fun,”acknowledged Bryant Hornets head football coach Buck James. “You know, it ain’t too much fun from a coaching staff standpoint. But from a fan’s standpoint and from a players’ standpoint, I mean, that’s a game they’ll remember the rest of their lives. I think they will, and their parents will. They’ll always remember that game. I still remember games that I played in high school like that. That game will be etched in their memories forever.”

The night that Deion Sanders and his son, Shadeur, who’ll no doubt follow his dad into the NFL one day, came to Bryant and the Hornets sent them back to Cedar Hill, Texas, with a loss in a memorable, thrilling contest unlike any other in a few years at Hornets Stadium.

Though they led most of the game, the Hornets found themselves trailing 40-38 with 9:09 left to play. It’d been a long time since the two-time defending State champion had trailed in the fourth quarter. How would they respond?

James couldn’t have asked for much more as his team rallied for a 44-40 victory over the Trinity Christian Tigers.

It was the Hornets’ 20th consecutive win. And, as unaccustomed as they may have been to being on the field at the end of a game, the Hornets sure came through on offense and defense.

Starting at their own 25, the Hornets drove for the go-ahead touchdown on 10 plays, eating up nearly five minutes.

A 15-yard pass from Austin Ledbetter to Joseph Young converted a third down early in the drive. Ledbetter and Hayden Schrader hooked up for 19 yards then Tanner Anderson wove his way for 17 yards to the Trinity 16. Two more Anderson runs reached the 5.

But the Hornets looked like they may have to settle for a field goal. A false start penalty had them in a third-and-goal situation at the 9. Ledbetter dropped back to throw, saw a crease on the left side of the line and evading one tackler and keeping his feet despite stumbling, he angled his way into the end zone for what proved to be the winning points.

But they weren’t winning points. With 4:26 still to play and the explosiveness of the Trinity offense behind the strong-armed quarterback, it was not over yet.

Despite a 15-yard blocking penalty on the kickoff return, the Tigers got out of the hole when running back Emari Matthews broke a 27-yard run that ended with a horse-collar tackle that cost the Hornets 15 more.

With a first down at the Bryant 34, Sanders passed to Robert Williams to the 23. Matthews powered for 6 to the 17. On three consecutive plays, however, Sanders’ passes fell incomplete. The final one overthrown in the corner of the end zone.

Bryant took over on downs with 2:36 left. Two Anderson runs picked up a first down and the jubilant Hornets closed out a hard-earned victory over a tremendously talented foe.

The game was, to put it plainly, everything it was expected to be.

“It was a shootout,” James said. “I can’t say anything but how proud I am with those kids. They had to step up and they did. They stepped up and made a play. They showed a lot of character. “That’s why we bounce off that grass,” he asserted. “That’s why we get up in the mornings to come and lift weights. That’s why we work hard on Mondays. Our condition and our strength training all week, that’s to prepare for that kind of thing. And they answered the bell. They’ve paid the price on the practice field and in the weight room to be able to have a chance to win that game.

“I knew our defense was going to have a tough time,” the coach related. “There was no doubt about it. That quarterback is very talented. They’ve got talented receivers. Their offensive line was huge.

“But to win a game like that, somebody’s got to make a play and tonight we did.

“The thing is we shouldn’t have put ourselves in a situation to where it came down to a play,” the coach said, referring to his team’s four turnovers. “Hopefully, we grew up. Hopefully, our defense got better and, you know, after we go back and assess the film and they can assess themselves and coaches can coach them, I think we can grow from that. I think that’s the game we grow from.

“That’s what you want,” he said. “You want to play good teams who can expose you and do things to you that will make you better. They did it. You know we played a really good football team. Ten Division I players on that team and, last time I checked, we have one.

The two teams combined for over 900 yards of offense. Bryant’s was balanced as Anderson rushed for 145 yards on 21 carries, part of 227 yards rushing for the Hornets. Austin Ledbetter ran for two touchdowns and passed for three.

Early on, it was all Hornets as they built a 28-6 lead with the defense frustrating Sanders and his teammates.

On the opening series, Sanders was sacked on a third-down play by Rodricho Martin and Brandon Jones. As he was going down, he tried to get rid of the ball and was flagged for intentional grounding.

As a result, the Tigers punted out of their own end zone and when Noah Davis returned the punt 11 yards, Bryant had great field position at the Trinity 34.

With Ledbetter completing throws to Schrader and Anderson, the Hornets reached the 3. Anderson’s run after the catch was big. A play later, Ledbetter scored from the 1.

In turn, the Hornets stuffed the first two plays for Trinity only to have Sanders show off his strong accurate arm on the next play, hitting Jadyn Williams in stride behind the Bryant defense for a 77-yard touchdown.

Trinity missed the extra point, however, and the Hornets retained a 7-6 lead.

The first turnover followed. Ledbetter, under pressure by the Trinity rush, threw against his momentum. The ball sailed on him and was intercepted by the same Jordyn Williams, returning to the Bryant 23

A 15-yard penalty cost the Tigers. It was one of 13 mark-offs against them for 146 yards. The Hornets didn’t do much better with 11 infractions for 105 yards.

Facing a fourth-and-23 at the Hornets’ 36, Trinity went for it only to have LaQuav Brumfield break up a pass intended for Jadyn Williams.

The Hornets took over and drove for another score. On a night when they converted 9 of 12 third-down plays, they got a key pick up on a pass from Ledbetter to Cory Nichols.

It was 14-6 going into the second quarter. Aided by a holding penalty, the Hornets forced another Tigers punt. Jadyn Williams booted them back to the 19.

But the Hornets drove for another score. A 19-yard pass from Ledbetter to Young set up a phenomenal touchdown run from 44 yards out by Anderson, who appeared to be stopped around the 30. But he never touched the ground as he was hit and rolled out of the tackle, going the rest of the way to make it 21-6.

Chop blocks on consecutive plays frustrated the Tigers as they tried to slow down Bryant’s blitzes. Trinity punted back to the Hornets at their 49. Two plays later, a nicely set up screen pass, on which Ledbetter used great touch, and Xavier Foote turned into a 54-yard touchdown play.

At 28-6 with 7:15 still to play in the half, it looked like the Hornets were well on their way to victory. But the Tigers showed their explosiveness, scoring twice before halftime. The first score came on Sanders’ 31-yard strike to Matthews out of the backfield.

The Hornets drove to the Trinity 26. Another interception turned back the threat and set up another touchdown drive. Sanders tossed to Jordyn Williams for the score, this time from 11 yards out.

And because of a fumble on the Hornets’ next series, the Tigers got the ball back 29 yards away from paydirt. But, shades of things to come, Sanders, under pressure constantly, missed on four pass plays as the half came to an end.

Trinity continued a 20-0 stretch to whittle on the lead. Sanders found Reilly Anthony on a 34-yard touchdown pass and suddenly the Bryant lead was just 28-26.

As they would later, the Hornets responded when Anderson broke the ensuing kickoff 81 yards to the Trinity 8. On the tackle, made by the Tigers’ corner Cameron Wilson, one of the officials was rolled up under the collision near the boundary.

The game was interrupted as he was attended to and, with his exit with a leg injury, the officiating crew was down a member.

Though it took three plays, the Hornets got into the end zone. Nichols hauled in the third-down aerial from Ledbetter and, with Funk’s PAT, it was 35-26.

The Bryant defense stepped up forcing the Tigers to turn it over on downs at their own 30-yard line. Christian Del Castillo pulled down Matthews with a loss on a third-and-1 then the middle of the Bryant line stuffed Sanders on a fourth-down sneak.

Though the Hornets took over at the Trinity 30, they were unable to punch it into the end zone. Anderson broke a 23-yard run to get to the 4. But three plays later, Bryant faced a fourth down at the 5. Funk came on to drill a 22-yard field goal, which proved crucial.

“I’m happy that we work so hard on it,” he noted. “Coach (Adam) Pendergrass does one heck of a job. I’m proud that our kids take ownership and pride in trying to be good special teams players. That’s something that we’ve done here for the last two or three years now. You know, most times guys don’t think they want to play on special teams. But they take pride in it here, to do a job that gives us a chance to win a close ballgame.”

In turn, the Tigers were forced to punt, and the Hornets got great field position again. But, at the end of a 17-yard pass from Ledbetter to Nichols, the receiver was trying to get as much yardage as possibly only to have the Tigers force the ball loose.

Trinity took over and drove 60 yards for a score that narrowed the gap. The key play was another Sanders to Jadyn Williams strike of 43 yards. Matthews scored from the 1 and Bryson Godfrey added the extra point to make it 38-33.

The only time the Hornets had to punt came at the end of the next series. A short kick provided Trinity with a short field that they covered in two plays, with the help of a major penalty, Matthews broke loose up the gut for 23 yards and the touchdown. Godfrey’s extra point had the Tigers up 42-40, setting up the dramatic finish.

“They responded,” James said. “You know our three running back showed up and played well. I thought our offensive line played well. And our receivers blocked well. Austin Ledbetter had a good game.”

The Hornets begin conference play next Friday at home against Fort Smith Northside.