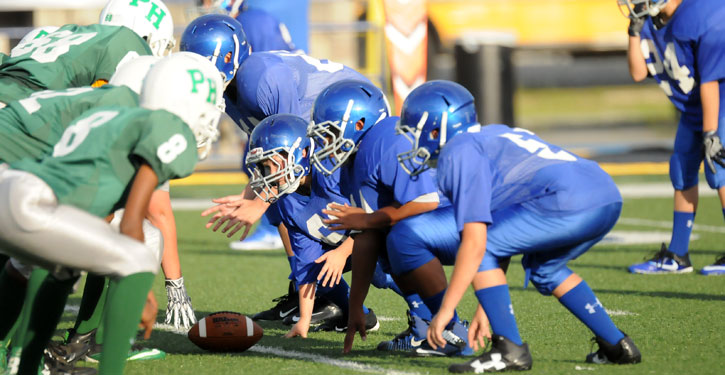 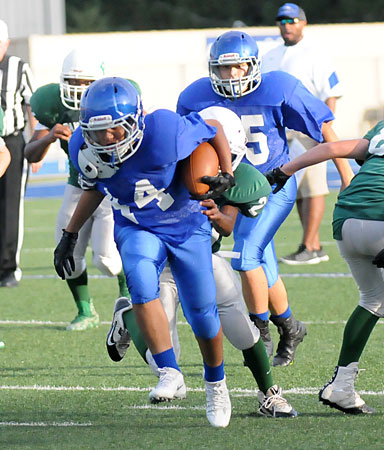 Fabian Torres (44) tries to break through a tackle. (Photo by Kevin Nagle)

Lawson Speer got to the corner and out-sprinted the defense on a 12-yard touchdown run with :23.6 left to play then added a run for a two-point conversion as the Bryant Blue Hornets seventh grade team of Bethel Middle School forged an 8-8 tie with the Pulaski Heights Panthers Tuesday night.

The Hornets had fallen behind midway through the first half when Pulaski Heights ran a reverse pass with wide receiver Matthew Mangiamele taking a handoff and rolling right. He found Fredrick Jackson by himself behind the Bethel defense for a 35-yard touchdown. Mangiamele ran in the conversion to make it 8-0 with 6:38 left in the half.

On offense, penalties and a turnover frustrated the Hornets. They couldn’t get much out of the first possession, which came after the defense had stopped a Panthers drive. A holding penalty negated a third-down play.

After Pulaski Heights scored, the Hornets’ offensive line and the tackle-breaking runs of Fabian Torres produced a drive from the 30 to the Panthers’ 43. Torres broke loose on an 18-yard run but most of it was negated by an illegal block. The half ended on the next snap and Jackson Prather was dropped for a loss. 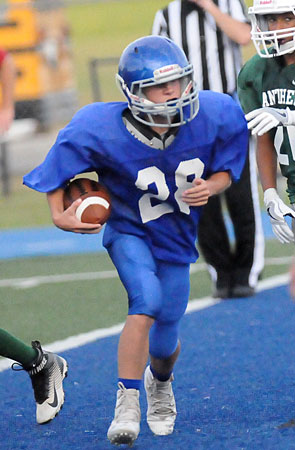 Lawson Speer (28) steps into the end zone for a game-tying two-point conversion. (Photo by Kevin Nagle)

Bryant Blue got the ball to start the second half and, behind the running of Matthew Oldham got out to the 45 before Layton Dickerson was knocked for a loss and a false start penalty sabotaged the effort.

Turnovers by both teams followed. Mangiamele’s fumble was recovered by the Hornets but, a play later, Prather’s pass was picked off by Mangiamele.

A holding penalty negated a 15-yard run by the Panthers’ Hisun Muhammad and, moments later, the Hornets had the ball back at their own 20 with less than five minutes left to play.

Torres provided the power and Speer supplied the speed as Bethel grinded out their best drive of the night with the game on the line. Speer converted a third-and-4 with a 14-yard run early in the march. A play later, Torres blasted 9 yards to get into Pulaski Heights territory.

Speer followed up by slashing for gains of 8 and 10 yards before Torres stomped for 13 to the Panthers’ 15.

After the Hornets took a timeout with :51.6 showing, Tyler Bates picked up a fumble and managed to gain 3 yards. That set up Speer’s touchdown jaunt. 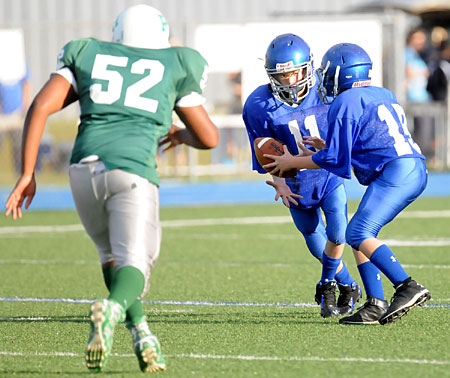 The Panthers had time to run three plays after Bethel tied it but Brandon Jones stopped the first run by Trestavian Cooper, Carson Burnett cut down Muhammad for no gain and, on the last gasp, Evan Barrett brought down Cooper for a loss.

Pulaski Heights finished with a net of 13 yards rushing in the game. The Hornets had 101, all on the ground, 63 on 10 carries for Torres and 42 on five totes by Speer.

The Hornets are scheduled to play in a jamboree in North Little Rock this Saturday. Then they’ll be off until Oct. 17 when they’ll tangle with Bryant White.