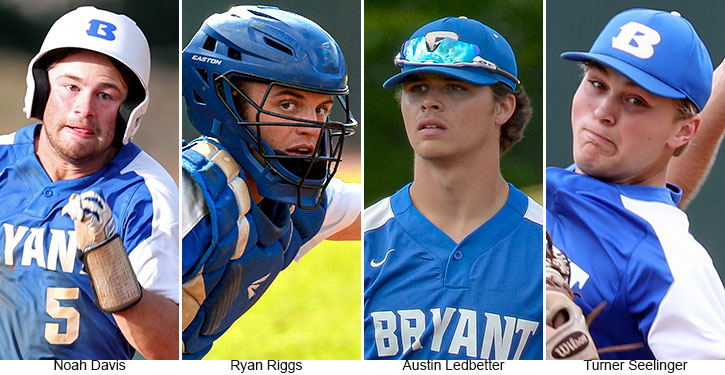 Austin Ledbetter, Ryan Riggs and Turner Seelinger earned all-State honors in Class 6A while Noah Davis was named to the coaches’ all-State team for the 6A-Central Conference champion Bryant Hornets.

In addition, Seelinger was named all-State Tournament for his shutout pitching in the Hornets’ 1-0 win over the Bentonville Tigers.

“Austin was able to compete for 4 years getting everyone’s best pitch and at bat. Austin has grown up with a bullseye on his back from day one and never wavered and kept competing. Austin had a terrific season this year and was honored by his peers for that season.”

Regarding Riggs, Queck said, “Ryan’s growth throughout the season was evident in his defensive and offensive abilities. Ryan led the team in average, was handed pitch calling, and continued to improve on his mechanics as a catcher and catch-release times showed. Ryan was a major reason for our success this season and is very deserving of his All State and All Conference accolades.”

Seelinger, a junior, led the team with six wins on the mound. He finished with a 1.06 earned run average with 65 strikeouts in 59 2/3 innings. He also drove in 18 runs on just 16 hits at the plate.

“Turner was on the mound against the best all season long and handled his duties with class,” Queck said. “What he was able to do against the lineups he faced shows the competitor and pitcher he is. I am extremely proud of his work and effort throughout the year and glad to see that work paying off for him.”

Davis hit .346 for the Hornets while playing shortstop. He drove in 22 and scored a team-high 25 runs. He led the team in extra-base hits with 12 including six doubles and team-highs with three triples and three homers.

“The pulse, the heartbeat of our team,” Queck asserted. “Noah was the head of the monster, and we went as he went. Noah is a young man that is blue collar in every sense and if I had my way would be player of the year because of what he meant to me, the team, his teammates. Proud of him and excited to see what he becomes.”

Wilson was 5-0 on the mound for Bryant. He finished with a 2.05 ERA and 38 strikeouts in 30 2/3 innings. At the plate, he hit .259 after taking over as the team’s left fielder midway through the season. He had two doubles and a triple.

Said Queck, “Garret was the consistent piece of the puzzle. His pitching ability is only going to grow at Connor State. What allowed us to accomplish what we were capable of was his ability to swing the bat and compete on the mound. Proud of Garret and he is very deserving of this acknowledgment.”

“Aiden had a tough task for four years coming in with little to no work because of his efforts on the basketball court but came in and went to work,” noted Queck. “Aiden was asked to pitch the first day back and never wavered and competed to his best ability. Proud of him for competing and helping us win a conference championship.”

Martin, another junior, nailed down the third-base spot early in the year and wound up hitting .274, leading the team with 28 walks. He had four doubles and drove in 18, scoring 21 times.

“Connor’s continued growth throughout the season helped us shore up our defense and line up,” Queck related. “Very raw skill set but extremely high ceiling, Connor was able to flash glimpses of what he is capable of doing and that was seen by his peers and coaches around the league. Excited to see what he can do to grow this summer and become next spring.”

Parker hit .256 with 13 RBIs and 15 runs scored. He swiped nine bases. After starting early at second, he moved to first and secured that position.

“Jackson’s ability to be flexible, a swiss army knife, made things easy for me as a coach when creating a line up,” Queck said. “I believe we found a home for him at first as he got to a point where he was extremely confident over there. Defensively, he made some big time plays and offensively had some huge hits for us.  I am proud of J.T. and glad to see his success recognized.”

Hathcote became the Hornets’ closer and earned a pair of saves. In 29 innings, he allowed just 22 hits and struck out 41.

“Will filled our role as a closer and really had a huge conference season,” Queck said. “Never questioned anything and went to work when he had to. Will has an extremely high ceiling as well and I cannot wait to see what he becomes over the next few years. I know for certain he will have success and work hard to reach that ceiling.” 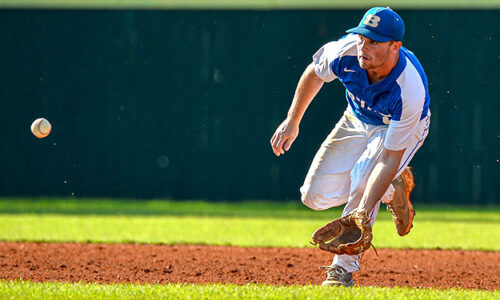