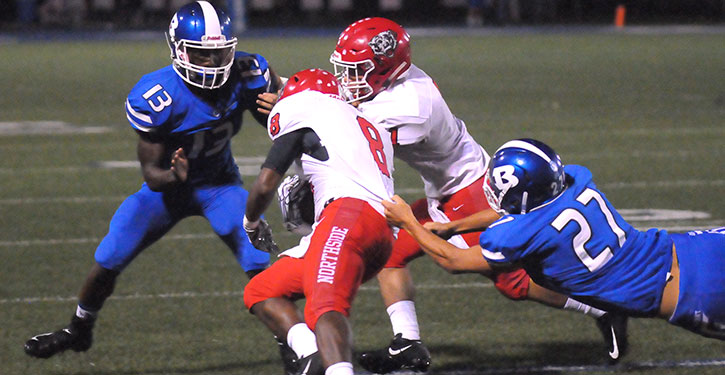 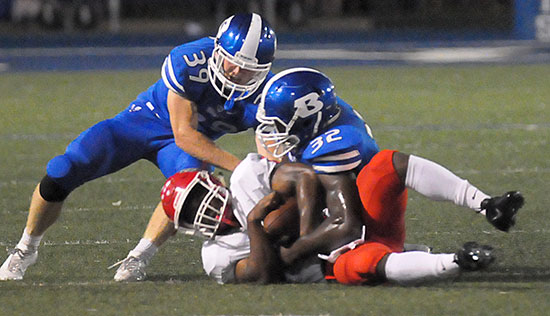 For the second time this season, a half was enough for the Bryant Hornets.

In a game delayed for about 30 minutes by lightning on a night when contests around the state were delayed and postponed, the Bryant Hornets and the Fort Smith Northside Grizzlies got just under a minute less than a half in on Friday night at Bryant Stadium.

More lightning forced the teams off the field and the fans out of the stadium and, at the time, the coaches agreed to just call it halftime.

But the lightning continued until, around 9:30, the game was called. Northside coach Mike Falleur decided his team, already banged up, was going home and not making the three-hour trip back to complete the game. Bryant was declared the winner by the 16-7 score that the Hornets enjoyed at the time. 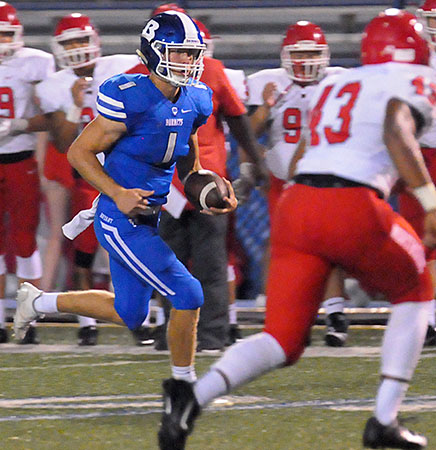 Ren Hefley breaks free for a run that set up the Hornets’ first touchdown. (Photo by Kevin Nagle)

To start the season, Bryant was declared the winner of the Salt Bowl less than three minutes into the second half when the game was called due to panic related to a false alarm.

“I’ll take it,” he stated. “It’s better than getting a loss for a half. This has been the craziest football season. I’ve never been through anything like this before, but I really applaud our kids. What they did to concentrate during, really, some adverse situations. They stayed focused even the whole time we were in the indoor (facility) waiting on a chance to go back and play. I really liked the way our kids accepted this challenge tonight.”

The Hornets improve to 3-1 overall going into a return to War Memorial Stadium in Little Rock (the site of the crazy Salt Bowl) against Little Rock Catholic. The Rockets’ game against Cabot on Friday night was suspended and is due to be completed, probably today.

Bryant imposed its will against Northside, particularly early on defense and definitely late on offense.

The Grizzlies had three extended drives that were each helped along by Bryant penalties. On the game’s opening possession, a pair of offsides penalties helped them along. After the Hornets’ Jabin Gulley nearly intercepted a pass, Northside faced a third-and-1 at their 37. 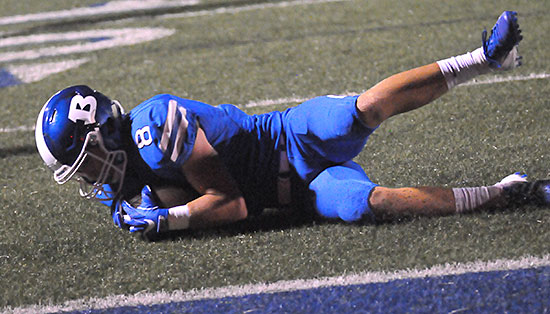 Jake Meaders cradles the ball at the 1-yard line, downing an Austin Ledbetter punt of 52 yards. (Photo by Kevin Nagle)

The Griz suffered a false start penalty and it went south for them from there. A bad snap on the ensuing play had to be tracked down by quarterback Derrick Wise at the 10, a loss of 22.

And when they lined up to punt moments later, another bad snap went past punter Dagon Moore and through the back of the end zone for a safety.

After Northside’s free kick from the 20, the Hornets were unable to take advantage of the good field position and wound up punting it back. But Austin Ledbetter’s rugby kick was allowed to roll, and Jake Meaders downed it at the 1.

Three plays from there netted 3 yards as the Hornets’ defense muscled up and the Griz had to punt it back. A short kick gave Bryant possession at the Northside 20.

Set up by a 10-yard scramble by quarterback Ren Hefley, the Hornets drove for a touchdown with Latavion Scott going to work behind the offensive line of Logan Burton, Tanner Wilson, Josh Stevens, Clay McElyea and Blaise Smith with H back Logan Reed. Scott scored from the 1 then ran in a two-point conversion to make it 10-0. 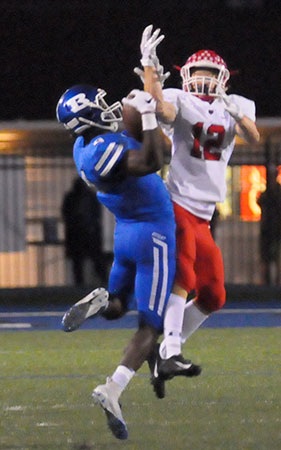 Northside answered with its own scoring drive that nearly stalled in the first three plays. On a third-and-one at their 30, the Hornets jumped offsides and the Grizzlies had a new set of downs.

Later, they faced a third-and-11 at the Bryant 46 when Wise completed a 28-yard pass to Jackson King to keep the drive alive. A play later, Wise scampered in from 17 yards out. An extra point made it 10-7.

In turn, the Hornets were driving. Hefley connected with Meaders on a 41-yard pass that had them at the Northside 23. Moments later, on a second-and-5 at the 18, Hefley was sacked, and the Hornets were called for holding, a spot foul that cost them 18 yards.

Hefley’s pass to Braylon Butler got 6 yards back but, on a third down, the Bryant quarterback, under pressure, threw the ball deep down the left side. At the 3, Northside’s Tyriq Adams intercepted.

The Grizzlies’ subsequent drive was stopped by the Hornets at the 27. Northside set up to punt and Meaders made a strong return. But the Hornets’ rush on punter Henry Hernandez drew contact and the drive was extended with the roughing the kicker penalty.

But the defense forced another punt three plays later. Wise was stuffed after 2 yards by linebackers Daylon Land and Jake Wright then the quarterback’s bubble screen throw to J.T. Thorne was stopped for a 2-yard gain by a nice open-field tackle by Tamaurian Wilson. On third down, Wise tried to go deep but had pressure in his face from Land and Kyle Green and threw it over everyone, incomplete. 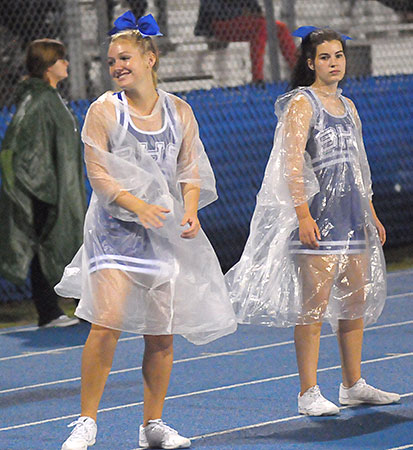 Meaders made another good return but an illegal block pushed the Hornets back to the 10 with 4:32 left in the half.

What followed was a convincing drive in which Bryant drove 90 yards on 11 plays to extend the lead. Much of it was just power football right at the Griz. Hefley completed a pair of passes to Josh Robinson along the way, the rest was Scott who had runs of 28 and 18 yards before capping off the drive with a 4-yard TD tote that put him over the 100-yard mark for the half.

In the driving rain, Grayson Scoles’ extra point kick missed then, as the teams were lining up for the kickoff, the lightning struck and did so continuously in conjunction with the downpour.

“I’m really proud the way our kids came back and responded after last week’s setback,” James said, referring to the tough 36-35 loss to Fayetteville. “I think our offensive line really showed up tonight. I thought, offensively, we clicked well. We ran the ball extremely well. Our quarterback made good decisions. Our receivers did a good job of staying in their routes and I thought we caught the ball well. So, offensively, it was a plus for us.

“The only thing that we’ve got to clean up is, we had a couple of penalties that we cannot have against good football teams,” the coach concluded. “Roughing the punter, that’s an effort penalty but we’ve got to use our heads. We had a clipping call and we had two offsides penalties that, really, a lot of yardage and an extra set of downs. That’s something we’ve got to improve on.” 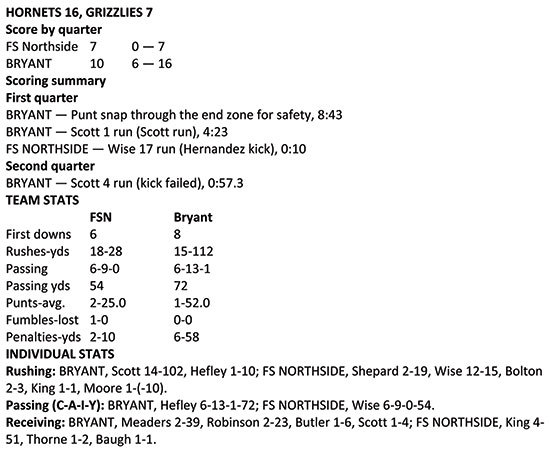