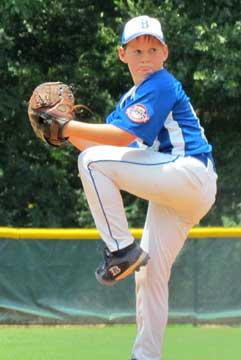 James allowed a single to center to start the game and, with two out, an error on a fly to left allowed the runner to score.

After that, he worked around a lead-off walk in the second and a lead-off single in the third. He issued a second walk to start the fourth but ended the game with a flurry, striking out the side, giving him six K’s for the game.

The Stars scored the maximum of six runs in the first, starting with singles by Stark and Kilgore. With one out, Drennan hit a grounder to short that resulted in a wild throw to first as a run scored. Likewise, McKim’s grounder to third drew a wild throw as Kilgore scored. Drennan came home on a wild pitch then so did McKim as Hilson and Hall drew walks. Hilson scored on a another wild pitch then Meaders and LaRue cracked singles to make it 6-0.

In the second, Stark belted a lead-off double and, after Kilgore was hit by a pitch, James smacked a single to left to drive in a run. Drennan and McKim followed with base hits then a run scored on Hilson’s grounder to short, making it 11-1.

James started the six-run third with a single to left. Drennan earned a free pass ahead of Lester’s RBI single. Drennan scored on a wild pitch before Hilson reached base on an error that allowed Lester to score.

With two down, Meaders singled then walks to LaRue and Stark along with another pair of wild pitches completed the outburst.