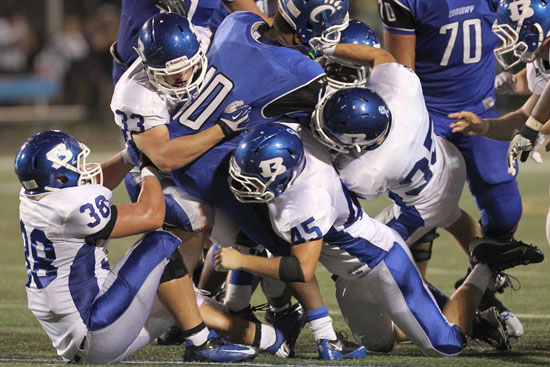 CONWAY — The blunt instrument that is the Conway Wampus Cats’ power ground game left the Bryant Hornets bruised and battered but unbowed Friday night. Though the Hornets absorbed a 24-7 loss in the 2013 season opener at John McConnell Stadium, they weren’t too far from scoring right along with the Cats from the outset, which would’ve changed the complexion of the game considerably. 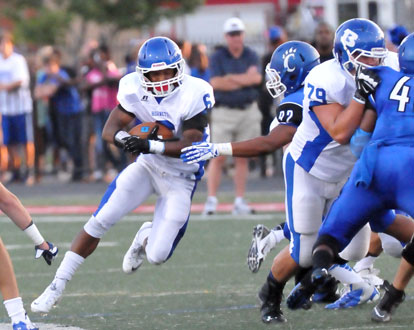 By the end, those that were at the game could observe the Hornets’ pain. Several players were limping and there was great concern for junior quarterback Brandan Warner, who passed out on the sideline late in the game and was taken to Children’s Hospital by ambulance, mostly for cautionary reasons. There was nothing but speculation about his condition as of late Friday night. By Saturday morning, it had been determined that Warner had not suffered a concussion.

In effect, Conway made like a classic Cabot team in a different formation on offense, pounding out 237 yards in 46 plays on the ground with sophomore quarterback Breylin Smith throwing just three passes (but completing them all). Karlil Johnson finished with 131 yards and two touchdowns on 19 carries. His alternate, Kevin Chamorro, added 78 yards on 21 tries with a TD.

“The kids are disappointed,” he related. “Obviously, we’re all disappointed. But I told them after the game, I said, ‘Guys, ask yourself, did you play as hard as you could possibly play?’ And I think they did that. We played hard, never quit, kept fighting. 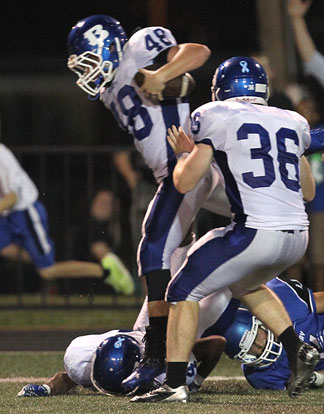 Connor Chapdelaine (48) returns a fumble recovery as teammate Austin May (36) tries to help his progress. (Photo by Rick Nation)

“It’s disappointing because these guys wanted to win so bad and you could see it in their eyes,” the coach mentioned. “To not be able to do it, it hurts but that’s life. They’ve got to bounce back. I thought Conway had a better football team than we did. I thought they had better players, better coaches, all the way down to the water girls. Sometimes that’s the way it works. You can play your guts out sometimes and you can win some of those. You have to play mistake-free football to do that and we didn’t.

Bryant moved the ball on offense all evening but just couldn’t finish its drives until they broke the shutout midway through the fourth quarter. As was the case with the defense, it was just a play here or a play there that loomed large.

Consider the Hornets’ first possession of the game: Sparked by Brendan Young’s 12-yard run right off the bat, they marched from their own 31 to the Conway 40 where, on fourth-and-4, H-back Wesley Akers was open on a pass pattern down the middle of the field. Warner appeared to get the ball to him in stride only to have Conway’s A.J. Burton knock it away at the last second.

Conway took over and, in eight running plays, got to the end zone. Johnson covered the final 24. The Cats had to convert third downs twice during the drive.

“I knew field position was going to be key,” said Calley. “I wanted to take advantage of field position and being fresh. I thought we could convert but they made a big play defensively. 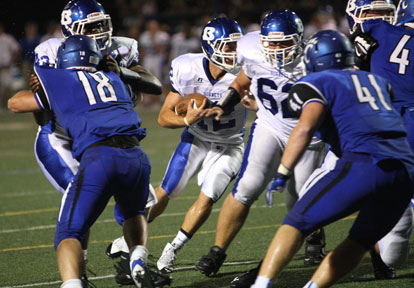 “I think, had we been able to score early — not necessarily have the lead but at least match them, been within 14-7, I think there’s a whole different mindset for both teams,” he stated. “The more success they had, the more confidence they got and you could tell that.”

Bryant countered by driving from its own 20 to the Conway 38. Warner completed passes for 7 yards to Brushawn Hunter, 12 yards to DeVonte Howard and 7 yards to Austin Vail while Young consistently added positive yardage on the ground. On a first-and-10 at the Conway 41, the Hornets tried some trickery with a reverse to Howard who looked to throw. Though he had more time than he might’ve thought, as Hunter broke loose down the sideline, Howard tucked the ball, reversed field and was brought down with a 4-yard loss.

The 7-yard pass to Vail got the Hornets back to the 38 where, on fourth down, Warner tried to get the ball deep to Howard, who had a step on his defender, enough that all that linebacker Jackson Smith could do was run up Howard’s back for an obvious pass interference penalty.

But, instead of getting the 15-yard mark-off and a first down 23 yards from paydirt, an offsetting penalty was called on the Hornets. The play was wiped out and, before the Hornets could snap it again on fourth-and-7, a procedure penalty was cited. Pushed back to the 43, the Hornets punted in hopes of gaining a field position advantage. 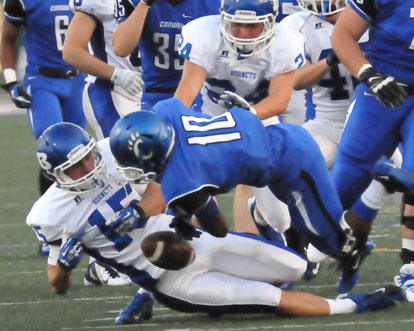 And they would’ve after Bryce Denker’s punt was fair caught at the 6 but one of the players on the coverage apparently didn’t see the signal until it was too late. He bumped into returner Sidney Moore for a 15-yard penalty.

The Hornets’ defense appeared to have a stop, aided by a procedure penalty against Conway that produced a third-and-7 at the Cats’ 35. Forced the throw for the first time, Smith’s deep toss to Moore was underthrown. But the senior came back for it and hauled it in for a 44-yard gain.

Conway reached the Bryant 15 where, on a third-and-4, Jake Johnson, who led the Hornets with 16 tackles, stopped Karlil Johnson for a loss of a yard. 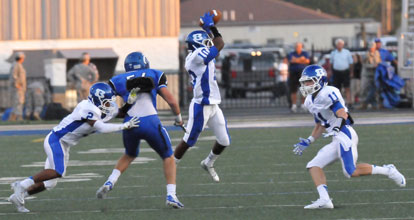 The Hornets went three-and-out for the first time on the subsequent possession and Conway added a 43-yard touchdown drive in five plays. Johnson scored from the 14 and it was 17-0.

With 3:18 left in the half, Bryant put together an even bigger threat than previously. With Young making some nice runs including a 12-yard bolt to convert a third down early in the possession and catching a pass for 6 yards, the Hornets drove to the Conway 29. On a third-down play, Warner found Griesemer over the middle for 9 yards. Howard followed, running out of the quarterback spot, slashed for 12 yards to the 8.

After their final timeout of the half with :20 left, the Hornets went to the air. Warner was flushed out of the pocket and tried to roll to his left to buy time. He got near the sideline and pump-faked. When he tried to bring the ball back in, it came loose and, like it was meant to be, it plopped into the arms of defensive end Andre Willard as the Wampus Cats took the 17-0 lead to the locker room.

“If we had more time, we could’ve run it,” Calley noted. “I didn’t want to give Conway another possession at the end of the half so we took the clock down as far as we could, which put us in a position where we had to throw it. The ball just slipped out of Brandan’s hand and they ended up picking it.” 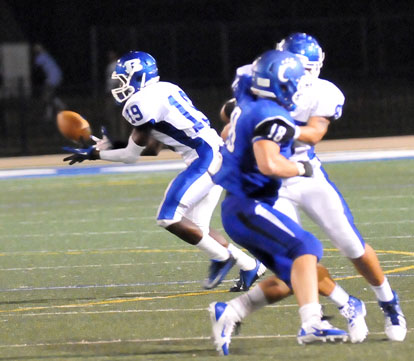 Kylon Boyle (19) looks in a pass as Dalton Griesemer leads his interference. (Photo by Kevin Nagle)

To open the second half, Conway re-established its pounding running game, driving 80 yards in 10 plays. Chamorro’s 22-yard run set up his 2-yard plunge for the 6. That came after, facing a third-and-1 at the Bryant 30, Chamorro was stopped for no gain by Bryce Denker. On the next play, however, the power back picked up 4 to keep the drive alive.

After a Bryant punt, Conway was moving it again but was pushed back by a holding penalty. On second-and-13, the Hornets got a big break. Chamorro couldn’t handle a pitch and the ball rolled away. Bryant middle linebacker Connor Chapdelaine scooped up the ball and headed the other way. His determined run ended at the Conway 18.

Young picked up 7 and, a play later, Howard sliced for 6 to the 3. Young got a yard on first-and-goal and, on second down, Wade appeared to be on his way into the end zone when the ball came loose and Conway recovered for a touchback.

The Hornets defense responded with a three-and-out, forcing a Conway punt that Howard returned 15 yards to the Conway 45 with 11:50 left in the game.

Bryant used 12 plays to get into the end zone. Warner’s passing was a highlight as he completed 5 of 6 throws. Wade picked up a first down on a 1-yard run to the 23. On the next play, however, Warner was sacked all the way back to the 40. Warner found Kylon Boyle for consecutive receptions of 12 and 16 yards as the Hornets overcame the second-and-27.

A 12-yard connection from Warner to Vail got the ball to the 2 and, on the next play, Warner kept for the 6. Alex Denker tacked on the extra point with 6:04 to play.

It’s the first time since 1997 and 1998 when a Hornets team has lost back-to-back season openers. In 1998, they lost to Conway the first time the two teams ever met. In 1997, like 1996, Bryant was defeated by Fort Smith Southside to open the campaigns. 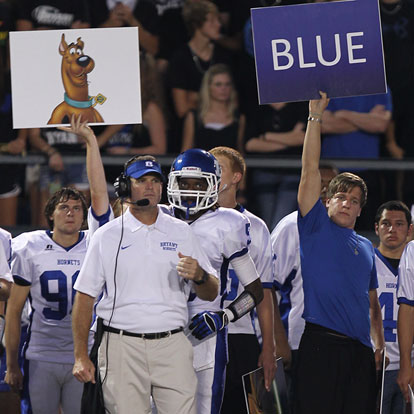 Bryant head coach Paul Calley looks on as sophomore Devon Alpe, right, and another Hornet player use the team’s variety of signs to call in plays. (Photo by Rick Nation)

Hornets on the radio
Wright seeks election as sheriff