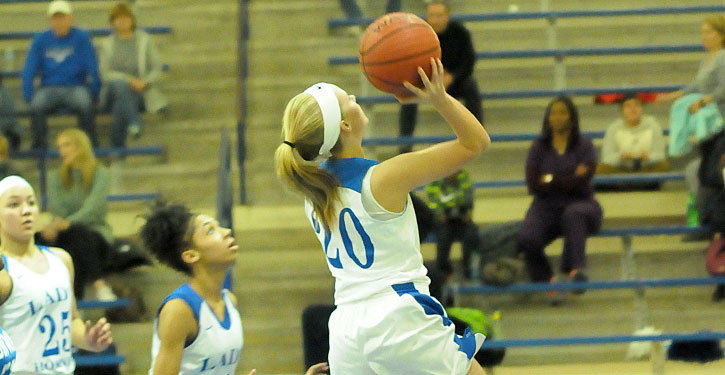 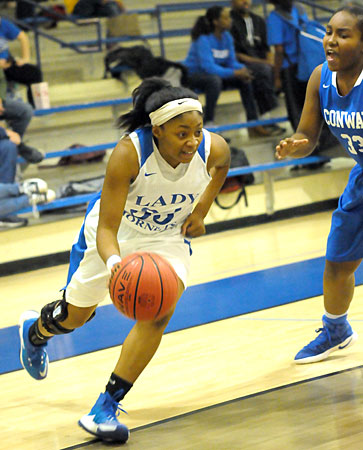 Because they collected 14 offensive rebounds and forced 24 turnovers, the Bryant Lady Hornets freshman team attempted twice as many shots from the field as the Conway White Lady Wampus Cats on Thursday night at Bryant Middle School gym. Unfortunately, the Lady Hornets converted less than 30 percent of their 37 shots including a 1 for 13 performance from 3-point range.

The result was a disappointing 35-30 loss, just the team’s third of the season in 15 games. All three setbacks have been at the hands of the three teams ahead of them in the Central Arkansas Junior High Conference, North Little Rock, Conway Blue and now Conway White.

The Lady Hornets visit Benton on Monday night then start the second half of the league’s schedule, which will include rematches with all three of those teams.

Conway White, meanwhile, converted 6 of 8 from 3-point range including three by Kierra Fulton for her 9 points and two by T’yaunna Rector, part of a game-high 17 points. Both of those players had 3’s in a game-opening 9-4 run, a stretch that also included Bryant’s lone 3, by Tierra Trotter who would lead the Lady Hornets with 13 points. 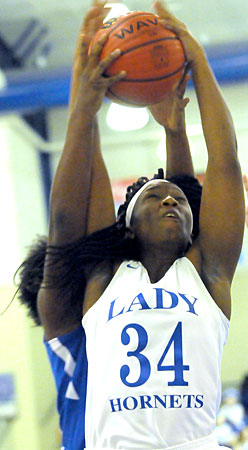 Ivory Russ battles for a rebound. (Photo by Kevin Nagle)

Lexi Taylor fed Ivory Russ for a basket to start a good spurt for Bryant late in the first quarter. Russ and Trotter combined to force a turnover and Trotter cashed in with a driving jumper. Celena Martin made a theft and, off a feed from Trotter, scored to give Bryant a 10-9 lead.

Unfortunately, that was the only lead for the Lady Hornets in the game. Fulton’s second trey in the final minute of the period put Conway White back on top by 2 going into the second stanza.

Rector and Trotter traded baskets then Madi Schitchl drained a 3 for the Lady Cats to turn a 2-point game into a 5-point margin. Still, the Lady Hornets kept after it. Martin got a bucket inside off an assist by Trotter and, after Russ had a pair of free throws refuse to fall, Martin tracked down the carom and scored to tie the game at 19.

Frustratingly, the Lady Hornets had several chances to take the lead, initially off another steal by Martin. But they were unable to take advantage. Fulton drained her third 3 in the final seconds and Conway White had a 22-19 lead at the break.

The Lady Cats’ Tremere Harris turned in a three-point play to start the second half then followed with a steal and two free throws to extend the margin to 7, the largest of the game. 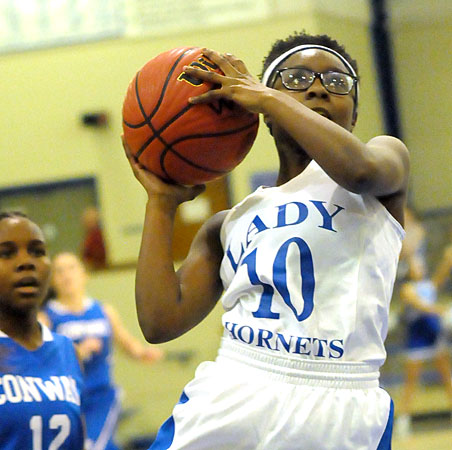 Tierra Trotter goes up for a shot after driving by Conway White’s T’yaunna Rector (12). (Photo by Kevin Nagle)

The Lady Hornets were unable to score until almost two minutes into the quarter. Kinley Oholendt hit a short jumper to break the ice. Over the next three minutes of game time, both teams scrambled but couldn’t score. Finally with 1:49 left in the period, Trotter hit a pull-up jumper to cut the margin to 26-23.

After a timeout, however, the Lady Hornets were held scoreless the rest of the period, which ended with Conway White clinging to a 27-23 lead.

The first two minutes of the fourth quarter were scoreless for the Lady Cats. A free throw by Martin and a basket off the offensive glass from Trotter had the Lady Hornets within 27-26. Trotter followed up with a steal and Taylor was fouled. But neither of her free throws would drop and Conway held the lead.

The frustrations continued as Martin then Tyianna Robinson made steals but the Lady Hornets couldn’t turn them into points.

With four minutes left, Rector drained a clutch 3 to get Conway White back on track.

A turnover cost the Lady Hornets but then, on consecutive trips, Robinson, Russ and Trotter made steals to no effect. Robinson came through with another theft and got to the free throw line to sink both ends of a one-and-one with 2:33 left.

The lead was down to 2 and the Lady Hornets forced another turnover to get a chance to tie or take the lead. But a 3-point try failed to fall.

With 2:09 left, Rector converted twice at the line. With 1:54 to go, Martin missed the front end of a one-and-one only to have Taylor track down the rebound. But she couldn’t stop her momentum down the baseline and stepped out of bounds.

Rector misfired, giving the Lady Hornets another chance but Fulton made a steal that led to a trip to the line for Rector with :57.6 to go. Rector missed the first shot but the long rebound was tracked down by Schitchl and the Lady Hornets had to foul again with :36.7 showing. Harris tacked a point onto the lead, making it 33-28.

Robinson made it a one-possession game again with two free throws at the :25.5 mark. But free throws by Rector put the game out of the Lady Hornets’ reach after that.

The loss ended a six-game win streak for Bryant, which was still without two top inside players, McKenzie Muse and Mekeycia Baker, out with nagging injuries.