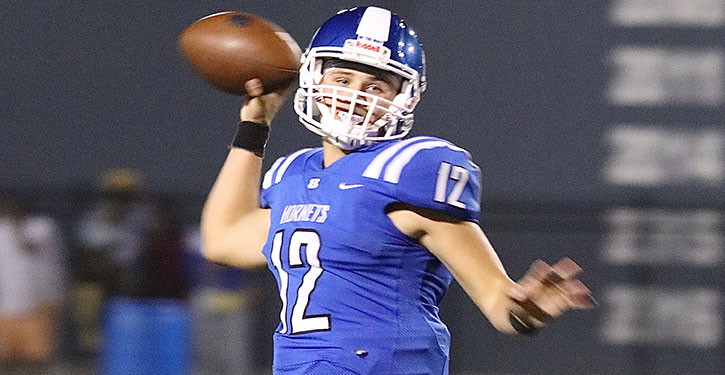 The Bryant Hornets’ record-breaking offensive output at North Little Rock on Friday night were incomplete as it turned out.

Further research revealed two more school records for senior quarterback Austin Ledbetter. Both are career marks, which is eye-popping because he has played four quarters in so few games during his stellar career.

Ledbetter is now the all-time leader for passing yards in a career and total offense in a career. With his record 534 yards passing on Friday, his career yardage passing went to 5,881 yards, breaking the old mark of 5,715 yards set by Hayden Lessenberry from 2010-12.

As listed in the game story here, Ledbetter’s single-game passing total eclipsed the previous record of 508 yards set by Jeramie Wooten against Benton in 2000. It was the fifth 300-yard-plus passing game of Ledbetter’s career, which is another school record.

The five touchdown passes increased his season total to 27 which added to his already school-record mark of 47 in his career, giving him 74 in his three seasons. The second-best mark it 46 set by Ren Hefley from 2016-18.

His single-game total offense number topped the old mark of 489 yards set by Scott Peeler against Benton in 2003.

In addition, senior wide receiver Hayden Schrader set a school record with 266 yards in receptions, breaking the previous record of Richie Wood of 240 yards against Russellville in 2004.

And, as a team, the Hornets amassed a whopping 826 yards of total offense, shredding the only school record of 626 set in 2017 against Little Rock Catholic.

The Hornets have now won 25 games in a row going into their regular-season finale against Conway. Eleven was the previous record for consecutive victories.