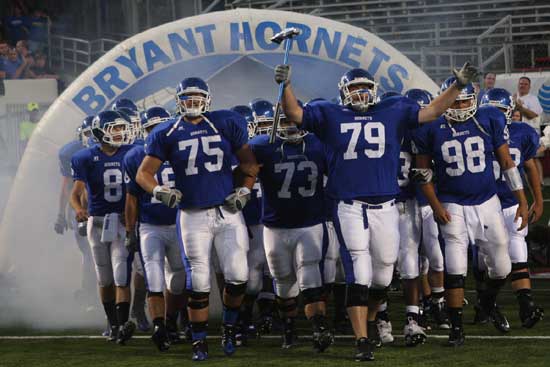 You’ve heard of fast-break basketball but how about fast-break football?

In their opener against the Pine Bluff Zebras last Friday night, the Fort Smith Northside Grizzlies snapped the ball 111 times on offense.

To put that into some perspective, the Bryant Hornets and Benton Panthers combined had 90 in the Salt Bowl that night.

But here’s the thing: Northside lost.

Pine Bluff shredded the Griz defense for 545 yards rushing and wound up with a 51-35 victory. The two teams combined for over 1,200 yards of offense in the game.

“They gave up a lot of yards,” Bryant head coach Paul Calley commented. “They’re not really big but they’re quick. They play an eight-man front which causes some problems for the offensive line especially. Considering we’ve block the same front all spring and then for about a month getting ready for Benton and we still made mistakes, it scares me facing them because they’re going to give you so many different looks.

“I think they’re going to bring a lot of run blitzes to try to stop our run,” he added.

“Pine Bluff was big and strong and they manhandled us quite a bit on the line,” said Henry. “We just didn’t have enough weight to stay on the line with them. We’re not near as big a team as they are.

“Our kids, a lot of times, were in position, they just got rolled out,” he continued. “We’ve got to put them in a position where they don’t have to take those big guys on. We’ve got to run around, do some stunts and fly to the football and do things like that. We’re not going to be able to just line up and whip that guy nose-up because he’s just too big.

“Of course, then you turn around and play a Bryant who is bigger than Pine Bluff in the line and very good,” Henry added. “They’ve got three or four backs that can run like that. They’re linemen, I thought, really do a good job. So you kind of go from the pan into the fire there from one week to the next.”

The Hornets piled up 427 yards of offense in their 45-9 win over Benton on Friday. Quarterbacks Blake Davidson and Hayden Lessenberry combined to complete 11 of 16 passes for 223 yards and three touchdowns. Four backs, Karon Dismuke, Stephen Clark, Jalen Bell and Jacob Powell along with punter Tanner Tolbert (who had a 42-yard touchdown run) accounted for 204 yards rushing and four scores.

Bryant defensive coordinator Steve Griffith said his players know what they’re up against.

“(Northside) is a very, very skilled offensive team,” he said. “They put a lot of points on the board and lot of yardage in the books last week. The young man from Northside is one of the best quarterbacks in the state. He does a great job of reading defenses, has a tremendous arm and is tough as nails. He is a tremendous competitor.

“So, we’ll have our work cut out for us,” Griffith stated.

“Offensively, I thought we had a good ballgame,” Henry stated. “We still made a lot of mistakes. We had some chances to score and we didn’t take advantage of them, which could’ve taken a little pressure off our defense. We threw the ball well, we caught the ball well but we still made some mistakes in the red zone that cost us a chance to score three times for sure and probably four times. They’re correctible things, things you don’t do in those situations, like a holding penalty when we could’ve been first-and-goal at the 5 instead of second-and-20 from the 30. Then we don’t score.”

“Unfortunately, we only have seven seniors,” Henry noted. “So, we’re real young. Even some of the guys that are playing, this is the first year they’ve ever played. So we’re learning week-to-week and practice to practice. The only thing we can’t do anything about is size. You can’t get any bigger but we can try to do some things better.”

The Northside coach said he was impressed with Bryant’s linebackers, “They’ve got three linebackers that I thought really came up, were real aggressive, played behind their pads.”

He was referring to mike Collin Chapdelaine, will Jacob Brady and sam Hunter Mayall.

“Chapdelaine, I thought, played real well (against Benton),” Griffith said. “He had a sack and a pick and a couple of negative-yardage plays.”

Regarding Northside, he concluded, “It’s a team we wanted on the schedule to prepare us for the conference season on down the line. Hopefully, we’ll come out and execute well.”

The two programs have only met twice, both were in State semifinal games between two of their best teams. In 1999, Northside ended Bryant’s unbeaten run through the regular season and first playoff game with a 14-0 decision. In 2004, Bryant was 10-1 before running into a Grizzlies team that was led by Auburn quarterback Kodi Burns.