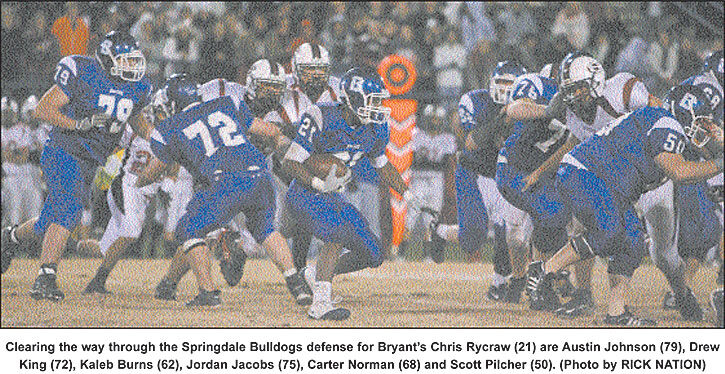 A little after 9 p.m. on Friday, Nov. 7, the text message came in to Bryant Hornets assistant coaches and others:

It was from Paul Calley, the head coach of the Hornets. He was in Rogers and he’d just watched the Springdale Bulldogs whip the Mountaineers, 49-25, to clinch the No. 5 seed to the Class 7A state playoffs from the 7A-West. Springdale would thus become Bryant’s first-round opponent on Friday, Nov. 14, at Bryant Stadium.

As the week progressed, none of the prognosticators expressed the same opinion, one even going to the extreme of making the Hornets a 35-point underdog. After all, the Bulldogs, with a quarterback Ashton Glaser committed to continue his career at the University of Missouri, a wide receiver LaDarius Eckwood considered a Division I college prospect, were averaging over 38 points a game in a conference that, in recent years, had been generally getting the best of it in post-season action.

But Calley knew the Hornets. Rarely do they come into a game with more raw talent than their opponent but, as Calley has said, they’re smart, they’re coachable and they have the heart and the will to win.

And his Hornets did not disappoint, holding the Bulldogs to their lowest point total of the season and surprising all those prognosticators with a 22-13 win that catapulted them into a second round game in Bentonville on Friday, Nov. 21.

The 2008 team becomes just the fourth in Bryant football history to win a playoff game; a history, however, that only included one playoff chance before the last 10 years.

“I felt like we could control the ball on the ground,” Calley recounted regarding his thoughts when sending his text.

Good ol’ keepaway, which actually played into the strengths of this Hornets team, a seasoned, rugged offensive line and a hard-charging, quick-cutting running back, particularly after one quarterback after another suffered season-ending injuries along the way.

And, sure enough, junior Chris Rycraw piled up 213 yards on 35 carries with senior Aspen Trevino adding 65 more yards on 17 totes. Rycraw was often in the game with 10 offensive linemen. Or, with sophomore quarterback Caleb Milam who completed one crucial pass in the game, Rycraw would line up behind seven linemen and a linebacker at fullback in Austin Humbard.

“They actually played a lot better run defense than I anticipated,” Calley said of Springdale. “The offensive line does a great job. Christian does a great job and we put Austin Humbard at fullback and, I’m telling you, he can clear the way. That’s the most hard-nosed football player I’ve ever coached. Hard-headedest too. But, if we didn’t have him, I don’t know what we’d do. And we got some big runs from Aspen in there at fullback.

“We had a couple of opportunities early with turnovers where we should’ve put the ball in the end zone and we had trouble moving it,” the coach recalled.

Indeed, Humbard, the school’s all-time leader in tackles (with 323 including 12 more against Springdale) brought down the first of his two interceptions (and the team’s four) on the first play from scrimmage. Rycraw peeled off 15 yards on Bryant’s first snap but the Hornets stalled at the 17. Senior Austin Bradley snapped out of a slump by drilling a 34-yard field goal, the first of his three in the contest.

Springdale responded with a drive that reached the Bryant 33. But, on the play that got them there from the Hornets’ 41, Glaser, on a keeper, was smacked down by senior safety Dijon Benton and had to leave for awhile with a hip pointer. His replacement Joseph Calcagni came on to throw a complete pass for an apparent first down but Springdale was flagged for holding and, two plays later, Shawn Burchfield and Brandon Peach sacked Calcagni to force a punt from midfield.

“Our defense played extremely well,” Calley asserted. “Coach Griff (defensive coordinator Steve Griffith) had a good game plan. He didn’t want to make it too complicated. We wanted to double (cover) (Eckwood) and not let him beat us. And the kids just executed so well, both sides of the ball.”

For all intents, the Hornets played a nickel defense with converted wide receiver Brandon Parish shadowing Eckwood, who came into the game with a whopping 102 receptions this season. Though he picked up nine more against Bryant, he never scored. Three times Parish knocked down passes headed for Eckwood, twice in the end zone.

“We just decided to stay with our base coverages, mix them up a little bit and get our linebackers involved by trying to get a little more depth and stay on those inside passing lanes,” Griffith related. “We knew about the great athletic (Eckwood) and we tried to mix things up over there. We ran some zone over the top with a man underneath and tried to just harass his routes a little bit. Then just give our deep guys some confidence that they could run with him and once they got the speed of the game, I thought we did a nice job.

“Parish did an outstanding job after getting a week of practice,” he added. “He’s the type of kid that’s going to step up to a challenge and he did it tonight. He did a great job with a dislocated finger that he suffered on Wednesday. Put a little brace on it and said, ‘Coach, I’m playing.’ He just kept going.”

Glaser, who came back in the second quarter, and Calcagni wound up going 21 of 47 passing with the four picks for 285 yards. Glaser’s 19 of 42 was well below his usual completion percentage and, after throwing 28 touchdown passes during the season, he managed just one against the Hornets.

The Hornets generally only rushed with three players and still got consistent pressure on the Springdale passers.

“We felt like, in watching the film, especially our defensive ends could put pressure on their tackles, just the quickness factor,” Griffith said. “And they did a great job. We wanted to take away the running game early. We felt like we did that. Once we did and we knew what they were going to do, it was just a matter of getting in the passing lanes, trying to disrupt some balls and when they did catch one, try to be very physical as we tackled. The kids did a great job.”

And the big hits paid off later when Springdale receivers dropped passes, no doubt in anticipation of the punishment.

Rycraw’s 47-yard run on Bryant’s second possession set up a 41-yard field goal by Bradley that made it 6-0. Springdale, with Calcagni, drove from its own 25 to the Bryant 48 but Humbard stopped running back Kyle Watson for a 4-yard loss and, after Parish knocked down a deep throw toward Eckwood, sophomore Tanner Tolbert stepped in front of a Calcagni pass for an interception at the Bryant 8.

The Hornets went three-and-out and Humbard came on to shine in another capacity, booming a 50-yard punt. But Eckwood made a nice return to the Bryant 48 and, with a flea-flicker pass in which Glaser handed off to Watson who lateralled it back to the quarterback for a deep throw to Eckwood, the Bulldogs reached the Bryant 7.

Brad Dull dropped Watson for a loss to the 9 as the Hornets continued to bottle up the run game. (Springdale finished with 38 yards on the ground in the game.) So, Glaser swung a pass to Tevin Barkey for a 9-yard touchdown to tie the game. Carlos Negrette added the extra point and Springdale had what turned out to be its only lead of the game with 8:22 left in the half.

And before the half was over, Bryant not only regained the lead but built it up to 12. First, the Hornets marched 80 yards in just six plays, all on the ground, to take the lead back. Rycraw set up the score with runs of 21 and 35 yards. Trevino capped it off with a 5-yard blast. Bradley booted the extra point to make it 13-7.

And when Humbard picked off his second Glaser pass three plays into the next Bulldog series, the Hornets were on their way to another score, driving 49 yards in 11 clock-eating rushes. Rycraw converted a fourth-and-1 from the Bulldogs 26 with an 8-yard dash. Moments later, he got 6 to convert a third-and-4 from the 12. Again, Trevino finished off the drive with a 3-yard burst to make it 19-7 with 42 ticks left in the half.

“When we needed a drive right before the half, we went to our two-tight I just like we’ve done all year and we marched it right down the field and stuck it in the end zone,” Calley noted.

To their credit, the Bulldogs answered with a drive to the Bryant 25. On the last play of the half, Negrette kicked a 24-yard field goal to make it 19-10 at the break.

And Negrette made a big play to start the second half, not only punching a nice onside kick that caught the Hornets unaware, but fielding it himself at the Springdale 47.

With the momentum mounting in their favor, the Bulldogs drove to the Bryant 8 only to have the Hornet defense rise up again. On first down, a swing pass to Barkey lost 2 yards. A second-down pass into the end zone intended for Eckwood was batted down by the leaping 5-foot-10 Parish. On third down, Glaser connected with Justin Bocchino but he was stopped short at the 2.

Used to scoring points in bunches, Springdale settled for a field goal to make it a one-score margin. Negrette booted the 19-yarder to make it 19-13. But little did the Bulldogs know, they were through scoring.

A 56-yard punt by Humbard helped turn the field over after the Hornets’ next possession stalled. Springdale drove to the Bryant 32 but ran out of downs there with Tolbert knocking down a fourth-down pass.

Bryant ate up the last 4:35 of the third quarter and 1:30 of the fourth but was unable to convert a fourth-down pass at the Springdale 28. Early in the drive, however, Milam converted a third-down with a 10-yard pass to Tim Floyd to keep the drive alive.

Given another shot, Springdale picked up 18 yards on a pass from Glaser to Bocchino. But, on the next play, Logan Garland intercepted Glaser and returned to the Springdale 39. And when a personal foul penalty was tacked on, the Hornets were back at the Bulldogs’ 25.

Three plays later, Bradley drilled a 39-yard field goal into the teeth of the rising north wind to make it a two-score game with 8:13 to play.

Springdale answered with a drive to the Bryant 19 with a 20-yard completion on fourth-and-10 from the 40 actually getting the drive started. After Tolbert knocked down a third-down pass from the 19, Negrette came on to try another field goal that would make it a 6-point game but he pulled it left with 6:00 to go.

In turn, the Hornets went three-and-out. Against the wind, Humbard’s punt went 34 yards and Springdale’s offense went to work again. But, after a 19-yard connection from Glaser to Eckwood, four incomplete passes followed with defensive end Shad Schwaesdall putting the pressure on Glaser. One pass was dropped and the fourth-down throw was nearly intercepted by Dylan Chism.

Calley fought with his emotions as he talked about that line. “The thing is, is that they’re all so beat up. And I was on them. I was on them about digging down. We needed a drive. The last three times we got it, we had to have a drive. And I went over there and I chewed them the best I knew how. They were tired. They were tired and they were hurting. And I was just trying to give them just a little bit more. And that last drive, they started walking them off the line of scrimmage.”

And, boys, the Hornets beat them.