HOT SPRINGS — Bryant Hornets freshman quarterback Beaux Bonvillain completed just five passes against the Hot Springs Lakeside Rams Thursday night but he made the most of them. Four went for touchdowns, two to Jake East and two to Austin Kelly as part of a 44-6 romp in the teams’ season debut. 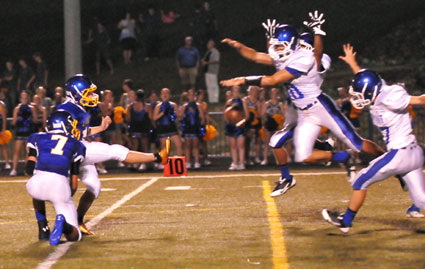 The Hornets also scored with their defense and on special teams. The former was an interception return for a touchdown by Devon Davis; the latter was a scoop and score on a fumbled kickoff return with Collin Welch getting the 6.

“I thought overall it was okay,” he related. “We need to cut down on some mistakes and we’re going to be okay. The penalties and the bad snaps and the turnovers.”

The Hornets were flagged seven times for 68 yards and had a pair of bad snaps that cost them 36 yards in losses. The lone turnover was an interception. Meanwhile, Bryant forced five Lakeside turnovers. Along with Davis, Kelly had an interception. Along with Welch, Marvin Moody and Madre Dixon recovered fumbles.

Bonvillain’s first TD pass came on the third play of the game. He hit East in stride behind the Lakeside secondary for a 53-yard touchdown. Landon Smith tossed a pass to DeAmonte Terry for the two-point conversion to make it 8-0 just 1:30 into the game.

The teams traded turnovers then with 2:17 left in the first quarter, the Hornets forced a punt after Nathan Mayes hounded Rams quarterback Fisher Alexander to intentionally ground the ball, costing yardage and a down. 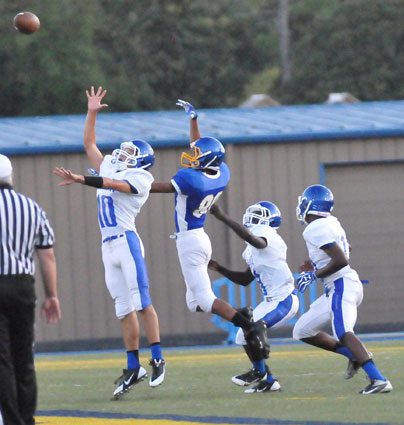 After a short kick, Bryant drove for another score. The Hornets had to overcome a pair of penalties, however. An illegal block in the back moved them back to their own 24. But Bonvillain kept for 10 then Phillip Isom-Green sliced his way to 17 more to make it a reasonable third-and-7 after it had been first-and-34.

The Hornets got the first down and more. On the only pass completion that wasn’t a touchdown, Bonvillain found Kelly on a deep post for a 36-yard gain to the Lakeside 13. Three plays later, on a fourth-and-9 at the 12, the duo hooked up again on a fade route. Kelly was just two tall for the Lakeside cornerback who was trying to cover him and he snatched the ball over his grasp for the touchdown.

This time, Isom-Green ran in the two-point conversion and it was 16-0.

The Rams picked up the first of their four first downs on their next possession. Alexander completed a 12-yard pass to Hayden Gray to get the ball to their own 43. On the next play, however, Terry dropped running back Ryan Viscardis for a loss. Kelly’s interception followed.

On another fade route against the smaller defensive back, Kelly hauled in a 29-yard touchdown pass three plays into the possession. Chase Kincaid kicked an extra point and it was 23-0 at the half.

Bryant kicked off to start the second half and Lakeside’s Kelen Bland tried to go right then reversed field and came back left. The Hornets descended and knocked the ball loose. Welch scooped it up inside the 10-yard line and scampered into the end zone. So when Smith kept for the two-point conversion, it was 31-0.

Aided by a pass interference penalty, the Rams drove for their score in response. The big play of the march was a 43-yard completion from Alexander to Gray. 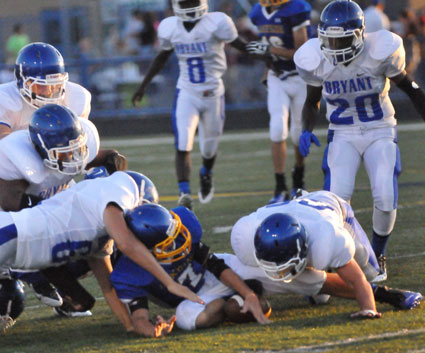 The Hornets scramble after a fumble that Lakeside quarterback Fisher Alexander tries to retain. (Photo by Kevin Nagle)

The Bryant defense made a bid for a goal-line stand with Terry foiling a swing pass by dropping receiver Caleb Dean for a loss. An incompete pass set up a fourth-and-6 at the 7. On the fourth-down pass, the Hornets were cited for holding and, though the pass was incomplete, Lakeside got another chance.

Alexander kept for 2 yards and the first down at the 1. He kept on the next play for the touchdown. The Hornets blocked the extra point attempt.

With the Rams selling out to stop the run, the Hornets were forced to punt but, moments later, got the ball back on Dixon’s fumble recovery. A play later, Bonvillain found East again for a 33-yard scoring strike that, with Kincaid’s PAT, made it 38-6.

The first play of the Rams’ subsequent possession was a swing pass. Dixon jumped the route and raced 30 yards for the final touchdown with 3:42 left.