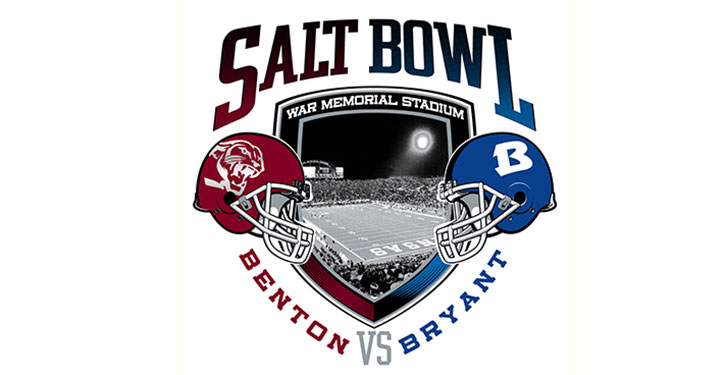 Salt Bowl 2019, pitting the defending Class 7A State champion Bryant Hornets and the defending Class 6A runner-up, will mark the 45th year that these two rivals have played one another in what has become the state’s largest attended high school game each year. This year’s game will be played on Friday night, Aug. 30, 7:30 at War Memorial Stadium. Benton will be the home team this year and will sit on the west side of War Memorial Stadium.

Those attending should note there are new security procedures this year at War Memorial Stadium including a clear bag policy and each fan will go through a metal detector. A list of permitted and prohibited items can be found on the Salt Bowl website:  www.saltbowlar.com

Tickets and t-shirts are on sale at all Big Red Stores in Saline County. Tickets are $12 each and include a Salt Bowl t-shirt, and a coupon for a free queso from Chuy’s. Available at both Chuy’s locations in West Little Rock and North Little Rock until Oct. 31, 2019.

The committee urges everyone to buy their tickets and t-shirts early. Tickets are available at the gate on the day of the game for $15, but that price does not include the t-shirt. Only AAA passes will be accepted.

Also, fans can now go to any Everett dealership in Saline Countyand sign up to be in the drawing for a chance to “Throw Like A Pro”.  Sign up between now and game day at any Everett dealership, GMC, Chevy, Ford and Infiniti or at the Everett tent at the tailgate party. Names will be drawn after the tailgate party and the participants will “Throw Like a Pro” at halftime for the chance to win a new GMC, Chevy or Ford truck.

Also, go to Chick-fil-A Reynolds Road in Bryant and sign up for the chance to be “Kickin’ for Chicken”.  Sign up between today and game day, names will be drawn and they will be given the opportunity to kick a field goal at halftime to win a year’s supply of chicken from Chick-fil-A.

The Salt Bowl Committee is also working again with organizations to give back to the community: The Arkansas Foodbank, the Arkansas Blood Institute and Goodwill Industries of Arkansas.

After collecting a record 40,000 pounds of peanut butter last year, the Arkansas Foodbank will again be partnering with Skippy Foods for the annual Peanut Butter Drive through Aug. 27 to provide food for children and families in need in the community. Schools from Bryant and Benton will be competing to see who can donate the most peanut butter, with a goal of 25,000 pounds, and then Skippy Foods will again provide a matching gift. Parents and students will be able to bring their peanut butter to Benton and Bryant School Open Houses prior to the start of school.

Arkansas Foodbank is also partnering with several local businesses to be drop-off locations. Saline County residents can drop off peanut butter at local Big Red Stores, any Everett dealership in SalineCounty and McFarland Eye Care. If your business would like to be a drop-off location, contact Nick Bradford at 501-569-4315. Businesses will then donate the peanut butter to the school of their choice in the Benton or Bryant school district. The peanut butter stays in the school districts and food pantries in Saline County.

Fans can also donate $10 to the Arkansas Foodbank by texting FEED to 501501. Arkansas is second in the nation for food insecurity. One in six, or an estimated 515,000 Arkansans, does not know where their next meal may come from. For children, that rate is even higher. One in four children face food insecurity in Arkansas, and in some rural counties, that rate is as high as one in three. Anytime, during the month of August, help out by texting and donating to help hungry children, families and seniors in need.

The Arkansas Blood Institute will be holding Blood Drives at both high schools. The Bryant High School blood drive will be held on Sept. 10, and the Benton High School Blood Drive will take place on Sept. 11. Both schools will be competing for a trophy to the school that donates the most pints of blood.

Goodwill Industries of Arkansas stores in Benton and Bryant will begin collecting Salt Bowl donations. Students, families and the community are encouraged to donate gently used clothing and household items at their respective Goodwill locations.In addition to helping fund numerous programs that provide education, training and employment assistance, donations collected will mean money for the school districts and gift cards for families in need. On Aug. 29, the donations will be totaled. The winning district will be named at the game. Both schools will receive cash prizes and gift cards for families based on the number of donations collected.

Game week will kick-off with the Recycle Saline Coaches’ and Players’ press conference that will be held at 11:30 a.m., on Tuesday Aug. 27 at the Benton Events Center. Coach Brad Harris, Coach Buck James and two players from each team will be available to speak about this year’s game prior to the Benton Chamber of Commerce Salt Bowl Luncheon at noon.

There will Pep Rallies for both teams and communities at Everett Buick GMC and Everett Infiniti during game week. The Bryant and Benton Community Pep Rallies will take place on Tuesday, Aug. 27, at 6 p.m., Bryant will be at Everett Buick GMC and Benton will be at Everett Infiniti. There will be free hot dogs, drinks and Kona Ice at each rally and drones will be flying over to determine which school has the largest crowd.

In addition, beginning at 4 p.m., businesses, non-profits, churches, colleges, campaigns and 103.7 TheBuzz  will be showcasing themselves on the east side of War Memorial Stadium  Also at 4, thanks to sponsors Petit Jean Meats along with Saline County banks and credit unions, free Petit Jean hot dogs and drinks will be given away, and over 80 vendors will be set up and Midtowne Church will be back with their Kids Zone of inflatables for the kids to enjoy. Anyone interested in a booth space, contact the Bryant Chamber of Commerce at 501-847-4702.

The gates into War Memorial Stadium will open at 5:30 p.m. Pre-game festivities will begin at 7 with a flyover after the National Anthem by Bulldog Flight-Mid South RVators. Recognition of the Future Panthers and Future Hornets and cheerleaders will follow sponsored a new sponsor ACDI, as well as Community Service Awards, the Rob Patrick Award and the Donnie Burks Award, all sponsored by another new sponsor, McFarland Eye Care.

The Honorary Captain conducting this year’s coin toss sponsored by Republic Services will be a THV 11 anchor celebrating his 50th year in the Radio/TV business, Craig O’Neill. The Honorary Co-Captains are Coach Dwight Fite who initiated the Benton vs. Bryant rivalry with a call to Coach Max Graham. Fite would end up being the head coach at both schools. Coach Paul Revis who was the head coach of the Hornets in 1974 and Doug Graham, Superintendent of the Nashville School District and son of the late Benton head coach in 1974, Max Graham.

At halftime, the cheer and dance squads will perform, the Benton and Bryant bands will again perform together, followed by the “Kickin’ for Chicken” and “Throw Like A Pro” contests.