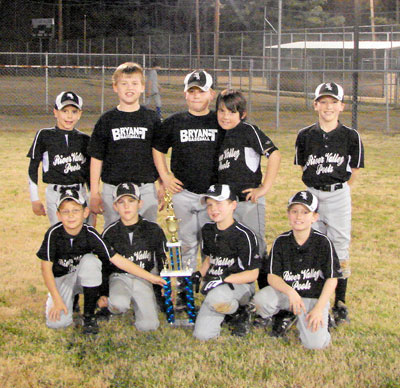 The 2009 Little Oaks tournament in Mabelvale came down to two 9-and-under teams from Bryant. In the pitching machine tournament, the Diamond Sports Diamondbacks and River Valley Pool White Sox squared off in the finals of the winner's bracket on Saturday, March 7.

Diamond Sports' first baseman Brandon Hopkins hit a solo homer over the left field fence to break a 3-3 tie, but River Valley rallied to win 8-4 and advance to the championship game.

The Diamondbacks then faced the Heartland Bank Cardinals, who earlier had posted a 9-7 win over the Thompson Electric A's, in the finals of the loser's bracket. Diamond Sports held on for an 11-8 win as they survived a bases-loaded jam in the bottom of the fifth inning by getting consecutive force outs at the plate to end the game, each going from pitcher Will McEntire to catcher Ryan Lessenberry.

In a rematch with River Valley Pools in the finals, Diamond Sports jumped to a 5-0 lead heading into the third inning. The White Sox rallied for two runs in the third and then got three more, all with two outs, in the bottom of the fourth to tie the game.

Still tied heading to the bottom of the fifth, River Valley claimed the championship by a score of 6-5 when Kale Kimbrough singled and then scored when Jessie Windemaker lined a ball up the middle that eluded the centerfielder and rolled all the way to the fence.

Thanks to Madison McEntire for the tournament update.