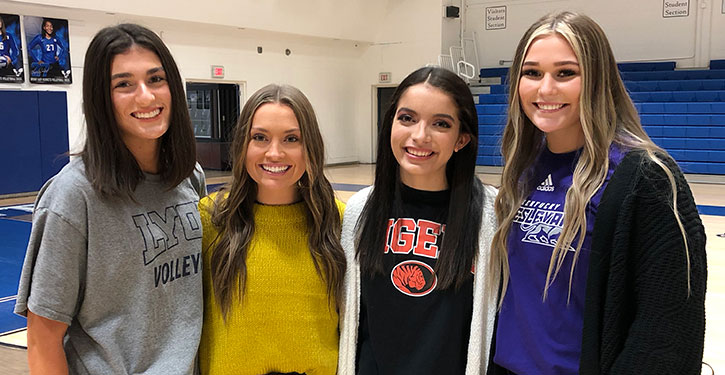 Though their senior season was a bit of a disappointment, four Bryant Lady Hornets’ volleyball players have plenty to look forward to. On Wednesday, Sammie Jo Ferguson, Alyssa Hernandez, Madelyn Hoskins and Samantha Still each signed to continue their educations and volleyball careers on scholarship in college.

“All of them still have lots of room to grow, which any college coach loves to hear,” said Lady Hornets head coach Leigh Ann Back. “They’re getting four solid players.”

“Probably one of the best teammates that I’ve ever coached,” Back said. “Very high energy, lots of room to still grow but she’s going to bring a lot of excitement to their program.”

Hernandez was a defensive specialist and a strong server that her coaches called a “silent assassin.”

“A very steady, very knowledgeable player that isn’t very vocal, but she leads by example,” said Back.

Of Hoskins, the coach said, “They’re getting an all-around, six-rotation player that, in my short time here, has played middle, outside and right side for me and has also played all the way around the court. She’s a very steady player.”

Regarding Still, she said, “A strong defensive player who has matured a lot in this last year. She’s really grown into a court leader.”