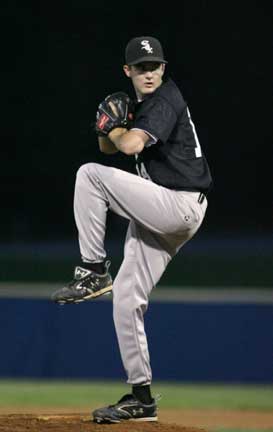 Some guys just take to the heat.

Bryant Black Sox Senior American Legion right-hander Austin Queck continued his summertime renaissance after struggling through the spring when, on Wednesday, June 17, he came within three outs of a no-hitter and faced just one over the minimum in a five-inning one-hit shutout of Jacksonville Gwatney Chevrolet at Bryant High School Field.

An eight-run outburst after two were out in the bottom of the first gave Queck a cushion to work with and the Sox went on to win 13-0 to improve to 15-2 going into Saturday's Zone 4 contest against Little Rock Post 1 Blue at BHS.

Queck issued a one-out walk to Jason Regna in the first then retired eight in a row before walking Regna again in the fourth. This time Regna was doubled off first when third baseman Hunter Mayall speared a line drive off Patrick Castleberry's bat and fired to first before Regna could get back.

Queck struck out Seth Tomboli to take his no-no into the fifth. But pinch-hitter Jacob Abrahamson slapped a 1-1 pitch cleanly through the left side for Jacksonville's first hit to open the fifth.

But the right-hander didn't let him bother him. He struck out the next batter then got pinch-hitter Nick Rodriguez to ground to Kaleb Jobe at short. Jobe stepped on the second base bag and fired to first for a game-ending doubleplay.[more]

Initially, Jacksonville's right-hander Tommy Sanders looked just as tough as he retired the first two Bryant batters in the home first. But Tyler Sawyer worked for a walk on a 3-2 pitch and the Sox starting swatting early in the count. Sanders couldn't get out of the inning.

On 0-1, Hunter Mayall smacked a single up the middle that Sanders had to side-step to avoid being hit. On the next pitch, Jobe followed with a grounder to right to chase Sawyer home with the first run. The next delivery was slapped to right by Brady Butler, delivering Mayall and Jobe, who had taken second on a return throw from the outfield that missed the cutoff man on his single.

Brennan Bullock took a strike then he joined the hit parade with a single through the left side. Ben Wells watched four pitches but all four were out of the strike zone as he walked to load the bases. With B.J. Ellis at the plate, Butler scored on a passed ball. Ellis eventually walked after fouling off a pair of 3-2 pitches, bringing the top of the order back around. This time Justin Blankenship pulled a shot past first and into the right-field corner, driving in two more.

Sanders gave way to Tyler Wisdom who unleashed a wild pitch that allowed Ellis to score as he walked Caleb Garrett. Sawyer capped off the inning with an RBI single to make it 8-0.

Oddly enough, the Sox didn't get any more hits after that. In the second, walks to Jobe, Bullock and Wells loaded the bases and Ellis picked up an RBI when he was hit by a pitch. Blankenship's sacrifice fly made it 10-0.

Wells scored when Sawyer's grounder to first was booted then both Ellis and Garrett came home when Mayall's grounder to third drew a wild throw, making it 13-0.

The third Jacksonville pitcher, Daniel Thurman, worked around a walk and a hit batsman in the third then Jacksonville turned a doubleplay in the fourth to erase a lead-off walk to pinch-hitter Caleb Milam.