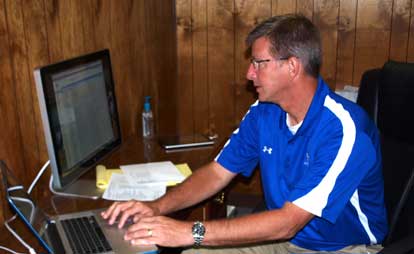 Randy Rutherford sits tall and confidently behind his desk in his office in the Bryant School District Administration Building. He recently accepted the top position in one of the most successful and fastest growing school districts in the state of Arkansas. He doesn’t seem nervous, though. He has an easy smile and speaks with confidence about his goals and expectations for the Bryant school district. Maybe it’s because he is dedicated to remembering his roots in education.[more]

This former athletic director and Bryant High School principal, whose basketball skills at Catholic High School in Little Rock gained him a scholarship to the University of Central Arkansas, says his years in administration have not made him forget what it was like to be a teacher. During his 10 years as a coach and teacher in the Little Rock School District, he said he saw some administrators make that mistake. He said, with the changes in accountability in Arkansas, it was easy to become caught up in data and forget. Seeing this made him realize moving into administration was a goal for him. He wanted to do things differently.

“The one thing I’ve always promised is, we want to do what’s best for kids,” said Rutherford. “But, at the same time, to do that you’ve got to do to support your teachers and help them do the best they can.”

After several years in administration in the Little Rock School District, Rutherford moved to a position as the athletic director for Benton schools. Toward the end of the 2009-10, after three years as the Bryant High School principal, he applied for the position of superintendent of Bryant schools that was to be vacated by Dr. Richard Abernathy.

Abernathy had been in the position for seven years during a time of tremendous growth in the city of Bryant and the district. Rutherford made the short list and was eventually chosen and voted in as the new superintendent. Rutherford said knowledge of the situations the district was facing and the facilities plan along with relationships he had formed with teachers and the community helped him beat out the other candidates.

“Our board is an outstanding board, and the community has always made us feel at home. I think all that combined, and I was in the right place at the right time, and it was a good fit,” said Rutherford.

He officially began his duties on July 1 and hit the ground running. Decisions regarding the upcoming school year and the construction of the new high school building left Rutherford little settling-in time. He knew there would be a great deal of work involved in the high school building project, but there was something he did not expect.

“The most surprising thing is how much I am learning about construction,” explained Rutherford. “I knew coming in that I was going to have to learn quite a bit, and I have and will continue to.”

Rutherford was also surprised by the number of meetings he had to sit in on. “You meet to find out when your next meeting is sometimes,” he joked.

He said some things haven’t changed with his new position.

“It comes back to kids. Even as a principal, I think I treated the kids that were at the high school as if they were mine during the day,” Rutherford explained. “I’ve got three kids of my own, but I had 2,100 at the high school that I considered my kids. All I’ve done really by moving to the superintendent’s role is grown that number to 7,000-some-odd plus my three.”

He said he would miss the daily interaction with students, however.

“The one aspect I worry a little about is I won’t have quite as much contact with kids, which [is something] I’ll miss,” said Rutherford.

He added he would try to be around students as much as possible, but other responsibilities such as meetings would make it difficult.

His main goals for the district include keeping the ball rolling on the facilities construction and upgrades lined out by the school board.

“We have a 10-year facilities plan that’s out there. Obviously we want to stretch that millage money that we passed as much as we can,” explained Rutherford.

He said his immediate focus was the new high school building, but there would be a new elementary school to build and updates to other schools in the near future. He also said many building improvement projects had already been underway over the summer months and would be completed before school starts on Aug. 19.

Another priority for Rutherford is to make sure students are safe and secure. Security cameras are going in most schools, and he is putting safety measures around the construction sites at the high school at the top of his list of priorities.

In the area of academics, he said the district will be moving to adopt the common core curriculum recently approved by the Arkansas Department of Education. He said the goal of the curriculum is to create a national standard. According to Rutherford, around 24 states have adopted the curriculum. He said it would probably be implemented by the 2013-14 school year. Until then, teachers will attend training sessions on the new curriculum.

“Each year the bar rises for accountability. You can’t just rest on the fact that you have good kids and a good community,” he said. “You’ve got to challenge those kids to keep going higher and higher as far as achievements.”

He also wants to continue advancements in technology as a teaching tool. He said it may make the difference in learning for some kids.

“If you can find a kid’s niche and what they like, they’ll jump through the hoops that you need them to in the educational setting.”

“It takes all of us as a team to make sure that it works,” he explained.

Rutherford says the growth in Bryant is one of the main challenges the district faces. Although he said it was “a good problem to have,” it means the district must increase classrooms and other facilities.

Part of the solution to this problem is the facilities plan, which will be rolled out in phases to accommodate growth. Implementing the plan and using money wisely is a challenge in itself.

“[We’re] trying to be good stewards with the money the public has entrusted in us and to make sure that they understand the big picture of what we’re trying to accomplish,” said Rutherford. “We’re trying to stretch their tax dollars as far as we can.”

Rutherford also wants to make sure the district retains and recruits quality educators by keeping salaries competitive. He said there would be other financial changes, but he credited Abernathy with doing good financial work while he was superintendent.

Where does Rutherford see the school district in five years? He said there would still be more building and more growth.

“When you offer a good product, people will come,” he predicted. “A lot of people will tell you the reason they’re moving here is because of the schools.”

He went on to say he wanted to keep the good reputation of the schools.

“I think we’ve go to continue to push academically to try to do everything we can to make sure our kids are the best they can be,” said Rutherford.

He said some changes might be in order to do this. “I’m changing the way we do business a little bit, and it’s going to challenge kids at a much earlier age which should ramp up the skill sets they get all through to the time they graduate,” promised Rutherford.

Although, Rutherford said he likes to please people, he also described himself as a straight-shooter who tells it like it is. He expects everyone to work hard and work together to help each child reach their potential.

“From kindergarten when we get them, all the way through the 12th grade, each step of the way for each child that we have that we push them to excel in everything they do. This is from an academic standpoint, an athletic standpoint, a band standpoint, all of it. We want the best well-rounded program we can have.”

Rutherford made it clear what he expects the focus to be in the district.

“There’s no hidden agenda. My being superintendent of Bryant schools is not about Randy Rutherford,” he assured. “It’s about all these kids … We’re all in this boat together, and we’re all trying to do what we think is best for our community and our kids.”